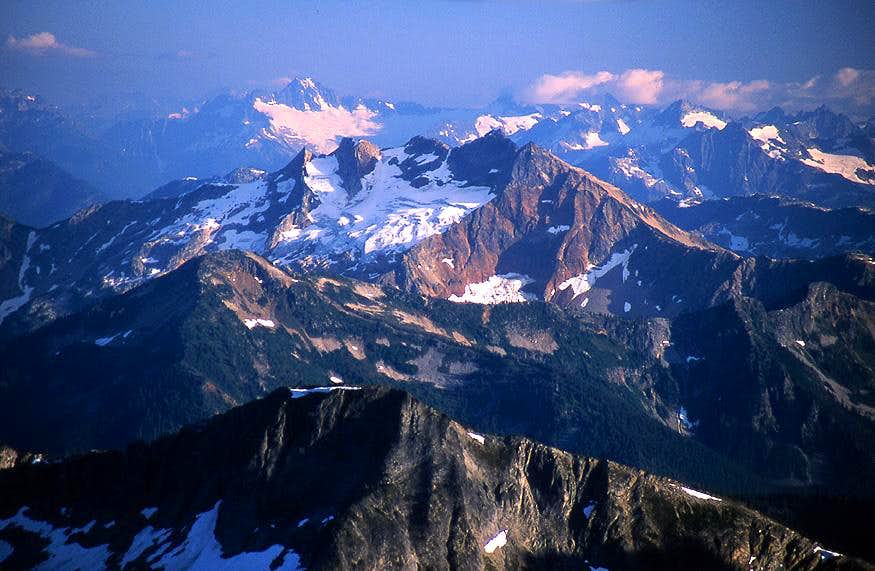 Mount Prophet and the Arctic Glacier

Mount Prophet is the highest peak and most prominent point located between the Picket Range and the west shore of Ross Lake, in the North Cascades. The entire Prophet sub-range is completely isolated from civilization by Stetattle Ridge to the south and the Chilliwhack range to the north. Big Beaver Creek runs along the base of the south and west slopes while Arctic Creek collects melt-water from the Arctic Glacier high on the north face. The mountain has roughly 9 main ridges or elevated ribs divided by 9 cirques carved out by prehistoric glaciers. There is a small lake in a southeast facing cirque 1.25 miles southeast of the summit. 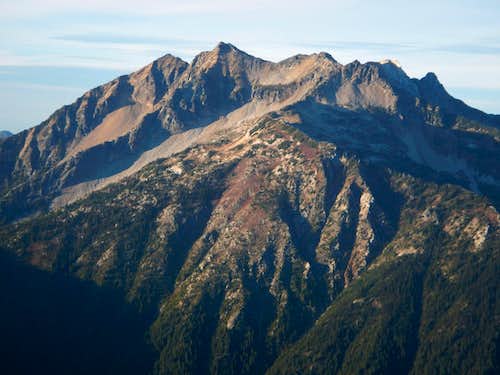 The South Face with Ridges and Cirques

Prophet was named after Tommy Rowland of the Skagit Valley, who was a religious fanatic and local prospector in the years between 1895 and 1900, (Cascade Alpine Guide: Rainy Pass to Fraser River by Fred Beckey). The first ascent date of Mount Prophet is unknown; however the first ascent of the Artic Glacier route on the north face was made July 28, 1978 by John Roper, Mark Allaback, Steve Allaback, Peter Eckman, and Alex Medlicott Jr. 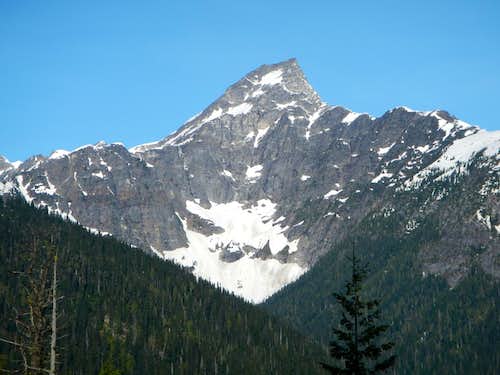 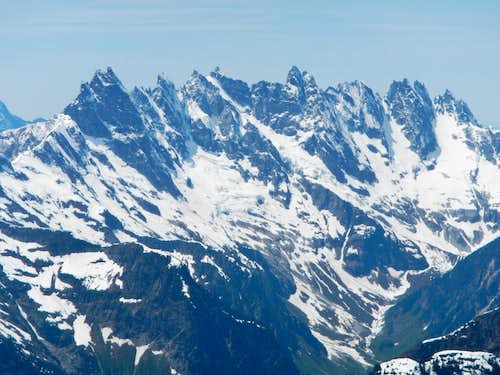 Southern Pickets
Mount Prophet has 4000 feet of prominence (known as a P4k) and is one of only 142 peaks in the lower 48 states which meets this criteria. Prophet’s most noteworthy peakbagging history concerns a man named Edward Earl. This page is dedicated to him. Edward was a self-proclaimed “prominencian” aka prominence enthusiast or seeker of prominent peaks or lists with regard to prominence. The P4k list was first completed August 18th, 2013 on the summit of Mount Prophet by Edward Earl, and since then only one other person has completed that list. For further clarification on prominence or why it is an important measurement, seek here. 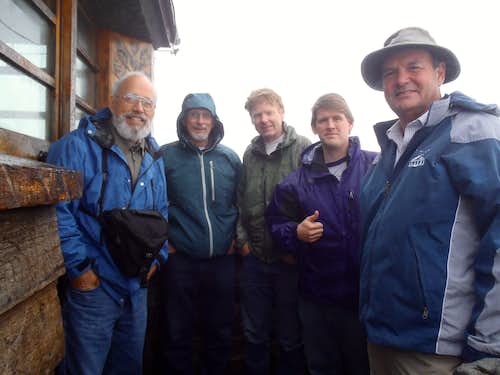 Edward Earl in the middle with other Prominencians

On average, Mount Prophet sees less than one ascent per year, not due to technical difficulty, but rather to it’s significant isolation. Climbers in the area tend to overlook Mount Prophet in favor of visiting the nearby Picket Range for higher peaks with more challenging routes. It is possible to hike on foot all the way from Highway 20 to the starting point of Luna Camp, but most will prefer to cut off the 6 miles (12 round-trip) by hiring a boat at Ross Lake Resort to water-taxi them to Big Beaver campground. This water-taxi option which is so often used for Picket Range access is quite expensive. Prices rose recently and now cost $60 per ride (each way). So a solo hiker might pay $120, but a group of 3 or larger could split that cost. If you wish to make reservations, visit their website. 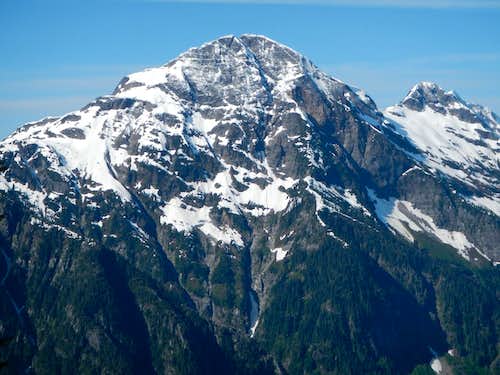 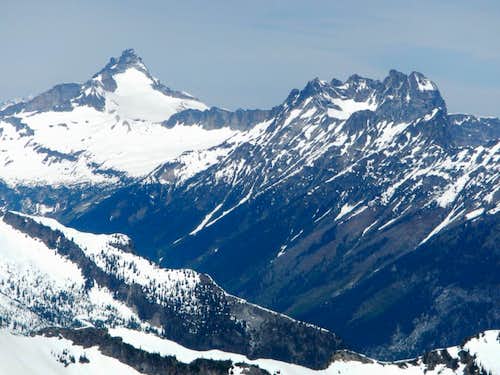 Mount Redoubt and The Moxes in the Chilliwack group

Mount Prophet is one of the best places to view nearby Luna Peak and the Southern Pickets group as well as the north face of Elephant Butte. Other main attractions include views of the Chilliwack group to the northwest, Hozomeen Mountain to the northeast and Jack Mountain to the southeast. Traversing from the summit to neighboring Genesis Peak (7244 feet) is seldom done, but not unheard of. It’s even possible with overnight gear to go as far as Pumpkin Mountain. 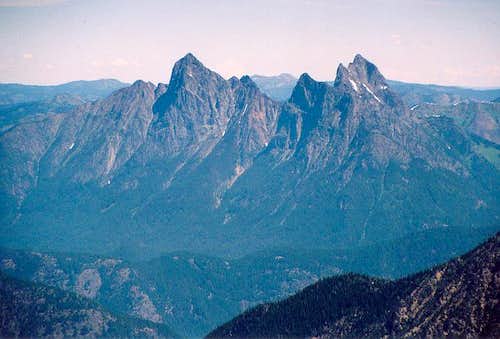 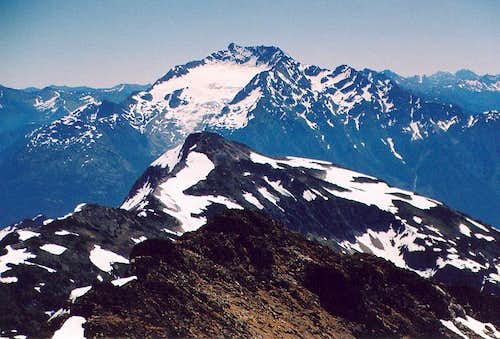 This page will only describe the Southwest Rib route since that is the way the author ascended, however there are route maps included for both routes. 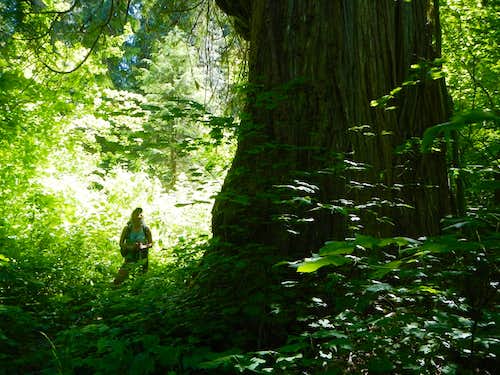 Whether approaching on foot or by boat, park at the Ross Lake Resort parking area on the north side of the highway 73 miles east of Burlington, WA or 59 miles west of Winthrop, WA. If on foot, hike less than a mile down the trail (does not show on some maps) to the crossing along the top of the dam. 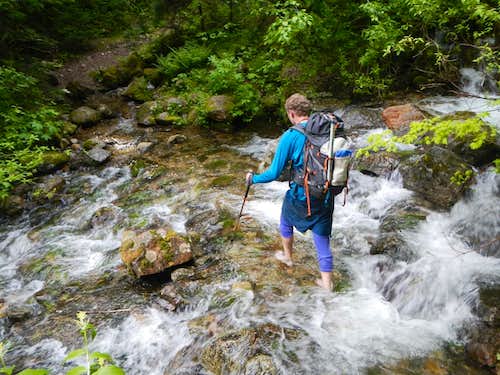 Fording The Creek Near Luna Camp

The west shore trail picks up on the far side of the dam and can be followed 6 miles around the base of Pierce Mountain to where it crosses a bridge and intersects the Big Beaver trail. From that key junction it is nearly another 10 miles to Luna Camp at 2500 feet. 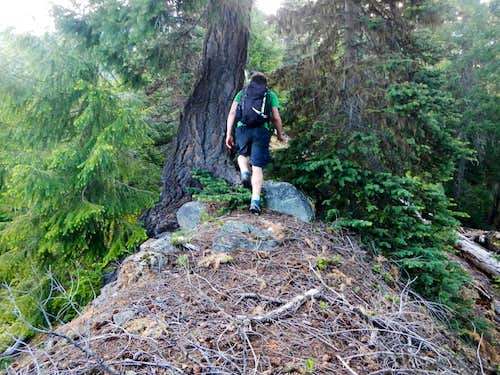 Southwest Rib
Some truly massive cedar trees break up the monotony of this long approach. For some reason, Luna Camp does not appear on topo maps and is misplaced in Google Maps. The correct location is (48.835544, -121.201815). This means you will likely have to ford the last creek barefoot multiple times during your trip. 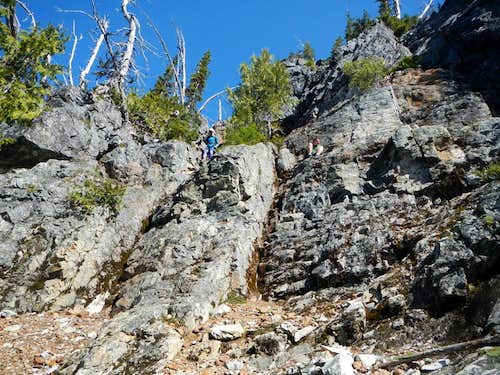 Crux section showing chimneys and one person sitting on the ramp

On summit day, from Luna Camp ford the creek back to the east side and head uphill where the brush appears to be the least troublesome. If you cross a second creek you have gone too far. The brush eases up pretty quick and some minor mossy rock slabs can be avoided. Keep the main creek on your left and at 3800 feet the slope narrows into a rib. This rib is forested but travel remains fairly easy and apparently animals also use it, because one person in our group encountered a bear. 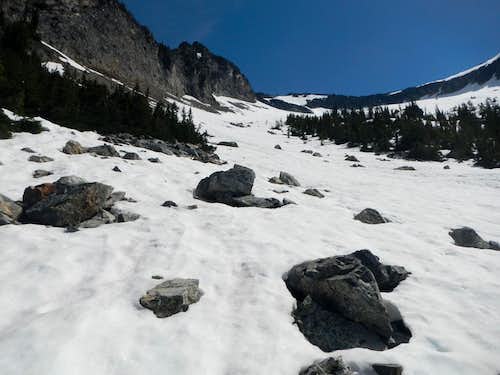 The Cirque Above
Follow the rib up to exactly 5450 feet. A GPS device might be helpful in finding the correct spot to exit the rib. The rib has cliffs on either side and no one has yet explored the possibility of climbing it directly to the summit. That could prove to be a bad idea. 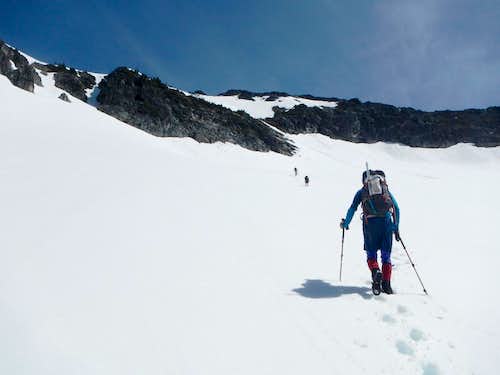 Aim For The Snow Ramp In The Cliff at 6900 Feet

From 5450 feet traverse to the southeast until there is a wall on your left. Descend 5 to 10 feet. If you’re in the right place, you should find a down-sloping ledge trending eastward. This ledge could be wet and is not necessarily the best option although it looks easy. But before the start of the ledge are two class 4 chimneys down below (one starts with a dirty gully) and a few arête formations in between. Choose whichever option looks best. The class 4 is only 10 or 15 vertical feet. 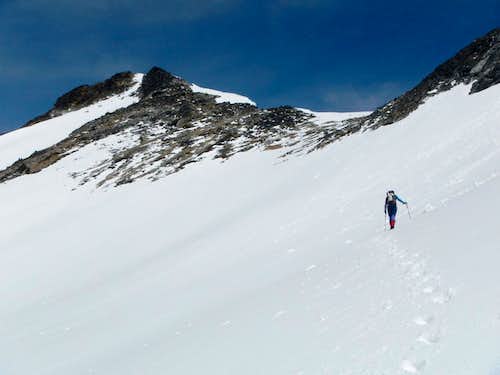 Below the class 4 step, descend to the left at the base of a slab and enter the southwest cirque. If you timed it right, you will have minimal talus to cross and plenty of nice snow in the cirque. 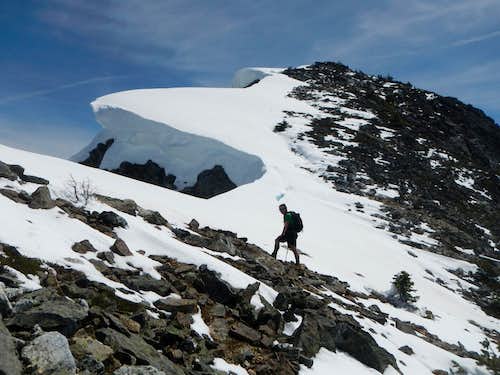 Cornices At The Saddle
There is one last obstacle on the way to the summit. A cliff band spans the top of the cirque at 6900 feet. With snow this cliff is easily bypassed on a snow ramp at the far right (east) side. Continue up to to the saddle east of the peak at 7420 feet and then follow the crest west by northwest to the summit. There is one gendarme right before the top which can be avoided on the south side. 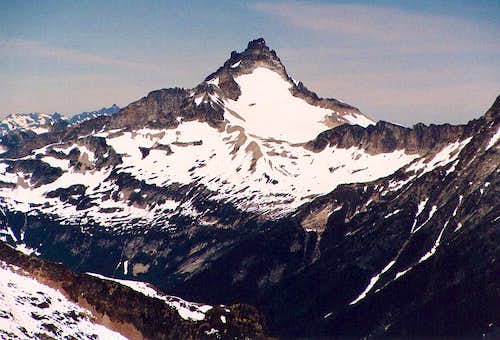 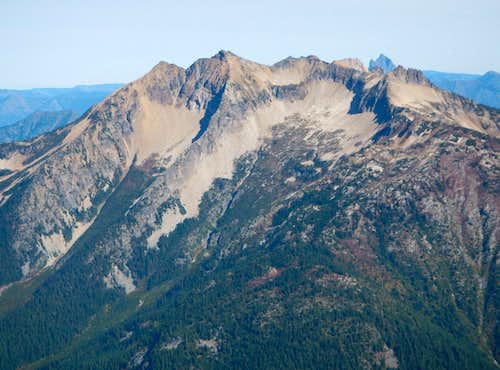 There are a lot of bears in the Big Beaver valley and you are likely to see one. Please hang your food properly or use a bear can. Remember that a fed bear turns into a dead bear.