I camped at the Onion Valley Trailhead Sunday night. I descended back to US 395 and drove to the Ranger Station just south of Lone Pine, arriving at 8 am, just as the gate was being opened. It took me just over ten minutes to obtain my permit. I drove up to Whitney Portal, placed all my food and toiletries in a bear box and began hiking up the Whitney Trail. Soon enough, I reached the North Fork of Lone Pine Creek Trail where someone told me that I would have to climb a 500’ sheet of ice if I went that way. I knew he was referring to Mount Whitney’s Mountaineer’s Route, which most likely contains snow and not ice. I bluntly stated that I was not climbing Whitney and began hiking up the steep switchbacks, crossed the North Fork of Lone Pine Creek twice, ascended the Ebersbacher Ledges and continued to Lower Boy Scout Lake. 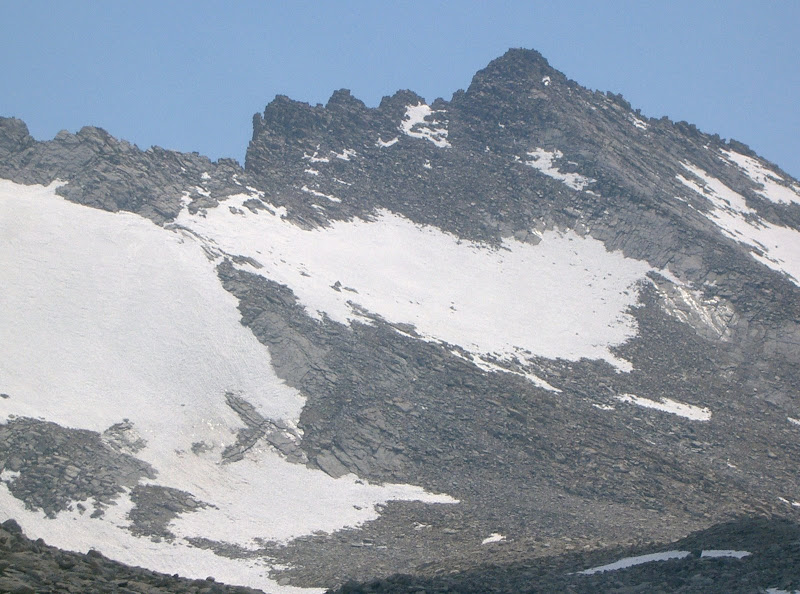 I crossed the creek at the outlet of the lake and continued up Clyde Meadow towards Upper Boy Scout Lake. Next, I followed the creek to the head of the canyon and ascended a chute (Rockwell Variation) to the Russell-Carillon saddle. 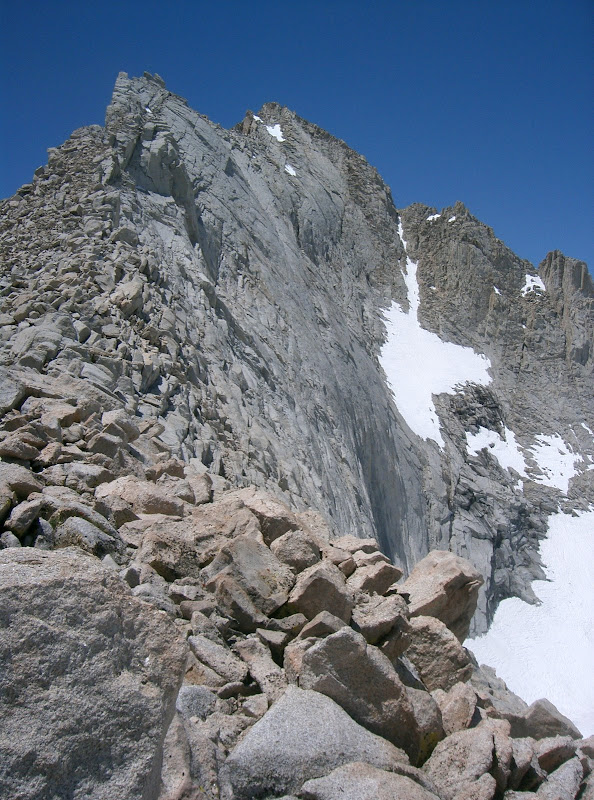 Mount Russell from the east

From the saddle, I descended towards Tulainyo Lake. I was surprised how steep this descent was. On the north side of the Russell-Carillon saddle, I really felt a feeling of remoteness. I then traveled around Mount Russell’s north ridge to the base of “Mount Randy Morgenson”. I ran out of water and decided to fill my bladder with a snow patch free of watermelon snow. Since my bladder was dry, the snow didn’t melt, so I filled it at the next available water source northeast of “Mount Randy Morgenson”. I climbed the north face, avoiding snow and staying primarily on large boulders. There was very little class three near the summit, but some exposure to the southeast. The peak was nicknamed and register placed in 1996, the same year that ranger Randy Morgenson went missing in the Sierras. Nobody had signed the register since August 31, 2007. “Mount Randy Morgenson” seems to be a seldomly-visited peak since there were only a few pages of register entries since it was placed twelve years ago in 1996. The views of Mounts Whitney and Williamson were great, but weak compared to the views of Mount Russell from the southeast to north to west aspects that I saw on my near-circumnavigation of the peak. 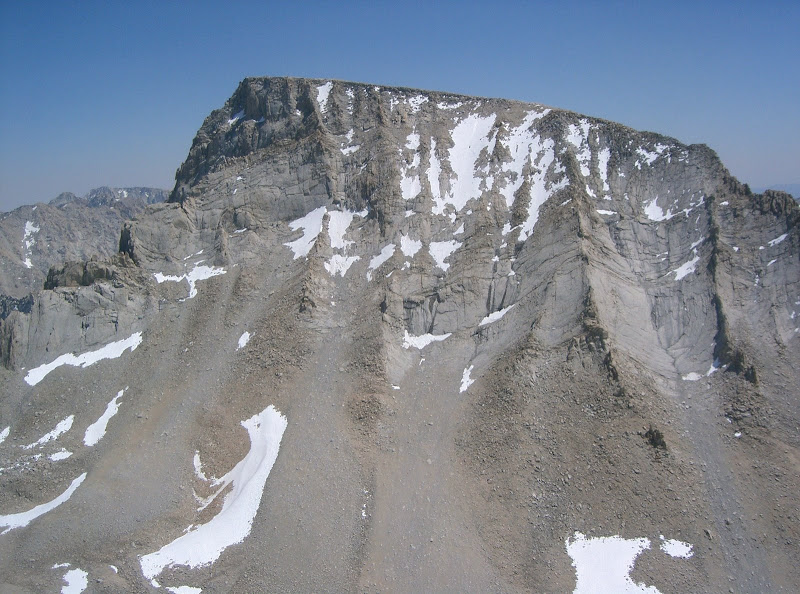 I descended my ascent route. After re-obtaining the Russell-Carillon saddle, I followed a faint trail heading southeast. I lost the trail and began descending a south-facing chute. Eventually, the chute cliffed out and I had to re-ascend to the chute I used as an ascent route. I was upset at making this mistake, but realized that there was nothing I could do, but to continue on. I finally made it back to Upper Boy Scout Lake where I talked with many people, then continued down to the trailhead after getting a little confused at the Ebersbacher Ledges. 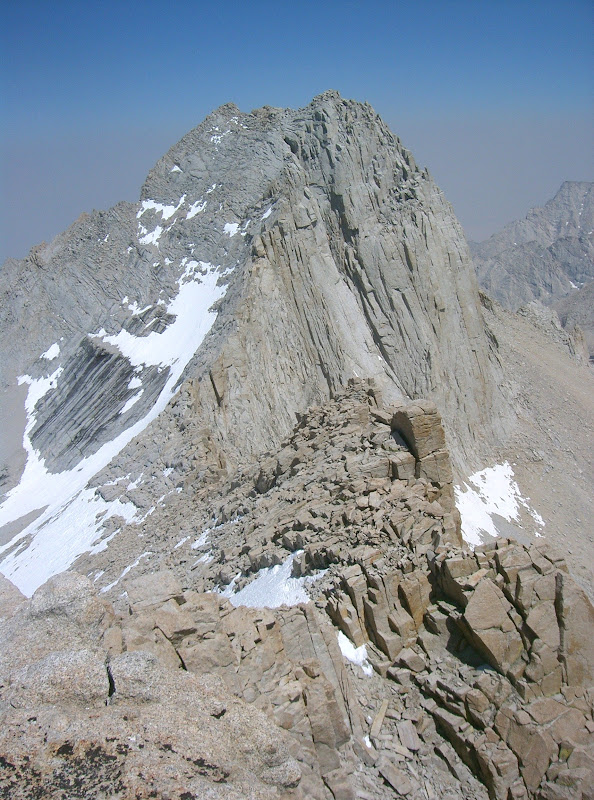 Mount Russell from the west 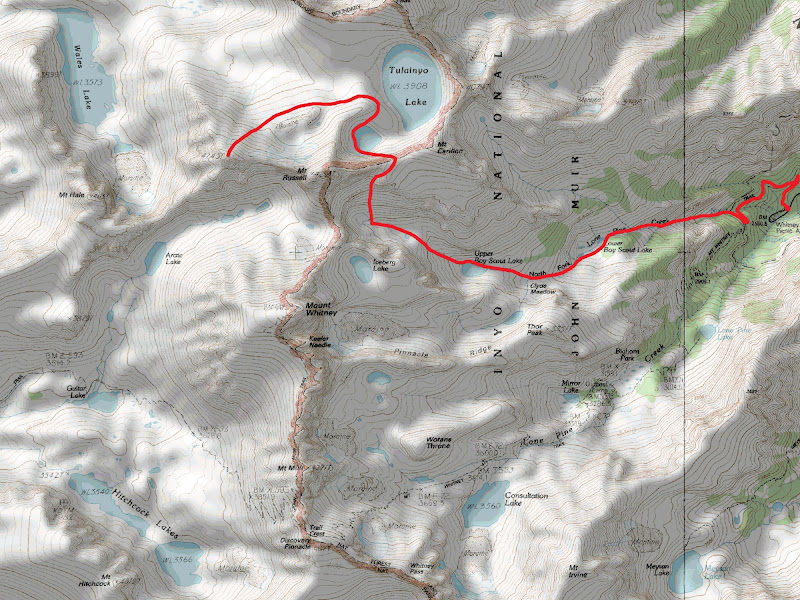 and very well put together! Is the smoke and haze I see in the
pictures from the CA wildfires?? Dude, I'm really sorry 'bout that.

I live in central Arizona, and I see a lot of smoke coming in from the southwest. Best of luck on your mountain adventures!!

Thanks!
Yes, the smoke and haze are from the CA wildfires.
The smoke was much worse in Reno last week.