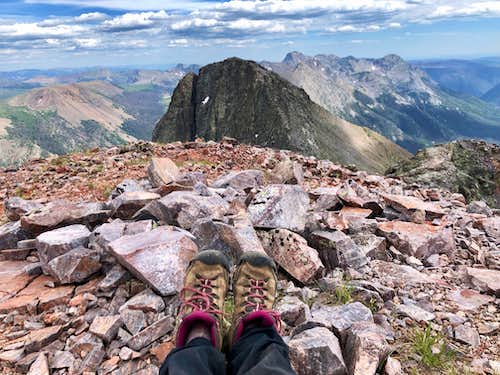 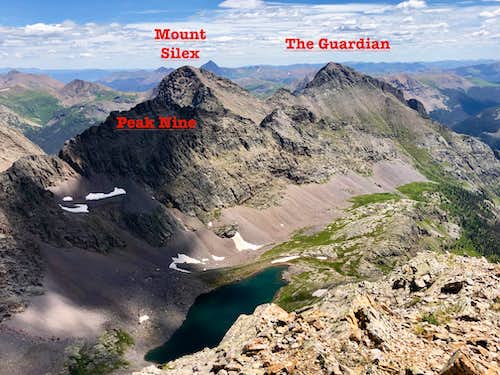 Mount Silex and The Guardian

Mount Silex is a beautiful and impressive 13er, bicentennial peak located in the remote Weminuche Wilderness. The area is surrounded by a multitude of beautiful ragged peaks.The peak is often combined with another impressive looking peak The Guardian. I chose a combination of 3 bicentennial peaks Peak Seven, Mount Silex and The Guardian as a long trip from the trailhead for Hunchback Pass, but backpacking would be a better option since the approach is long.

Guide to Colorado Mountain with Robert Ormes only briefly mentions Mount Silex: "The standard climb up Mount Silex is up talus slopes on the south side, for which you need to reach the 12,800' on its southwest ridge. Drop a few hundred feet off the pass before traversing out onto the south face. Better yet, bring a rope and try the steep fourth class, southwest ridge itself. Stay to the right of major obstacles." I thought the 4th class was easy and rope was not necessary.

What does Silex mean? Per the dictionary, silex means silica, especially quartz or flint.

Class: 2 loose by its easiest route, the northwest ridge has a few class 4 moves 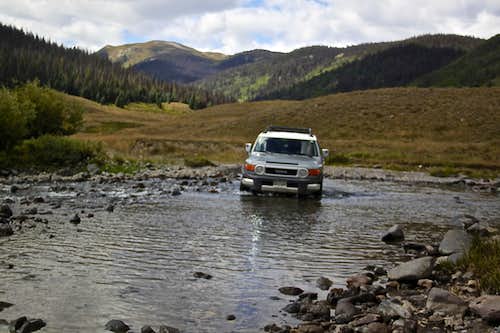 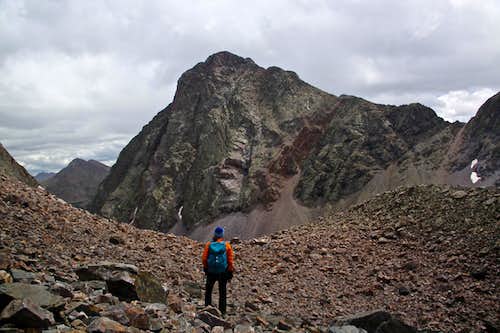 Boulder field below Storm King Peak with Mt. Silex
Getting there is not easy. I chose to come from Beartown/Hunchback Pass Trail, which still requires about 7 miles hike in and this trailhead is very remote and requires high clearance 4 WD vehicle, but I believe that this is the shortest way in.
Driving Directions to Beartown and Hunchback Pass TH (this section of the trail is also Continental Divide Trail): The road is in a pretty bad condition, especially close to the trailhead. Expect about 2.5 hrs drive from Silverton (some sections you will be driving only 1-2 miles per hour).
From Silverton drive on County Road 2 to Howardsville and turn here onto FR 589 marked for Cunningham Gulch and Stony Pass. You have to options here: stay lower or take a higher road for the Old Mine Tour, it does not matter which road you take since they both connect later on. At the point where these 2 road come together take a left turn for Stony Pass - well marked. The road climbs steeply and is narrow at some sections making travel difficult if vehicles coming from the opposite directions (often one car has to back up to spot wide enough where vehicles can pass).
Stony Pass is a pretty area, lots of wildflower in the summer, and access to several 13ers. The descent from Stony Pass towards Pole Creek seems dragging, the crossing over the stream can be problematic early in the season. There are great campsites in this area. After crossing Pole Creek, the road goes steeply up and then splits with right fork heading towards Beartown/Kite Lake and left fork towards Creede - again well marked. Soon, you will be crossing the Rio Grande - it is usually not much deeper than Pole Creek, but wider. It is an experience to drive your car through the Rio Grande River! Some people choose to drive from Creede side, but I think the road is tougher from the east side.
From the Rio Grande crossing, continue on Beartown road for about 5.5 miles. The first section could be muddy with potholes and big puddles. Once you reach the Bear Creek crossing, the road becomes rougher, with lots of loose rocks and towards the end steep. If your vehicle is having trouble, park at the Bear Creek and walk the last mile on the road (I usually drive this section with a speed of 1 mile per hour anyway, so walking may be a better option).
Hunchback Pass Trailhead is well marked, there is a parking spot for 2 cars right there and several more below and above.
Beartown is just a site, there is nothing there! Buy all your supply prior to the trip. Beartown boomed in 1893 when a rich strike brought about 400 prospectors into the area, but it did not last long. They mined Sylvanite.
Other options include longer backpacking approaches and combining different trails in the Weminuche Wilderness. You could cross over from Trinities and Vestal Peak, or from Jagged Mountain, etc.
I chose a loop to investigate two different basins: Stormy Gulch along Trinity Creek (I have been there before and return via Leviathan Creek Basin, both basins eventually meet with Vallecito Creek Trail and higher up Continental Divide Trail, which takes you back to Hunchback Pass Trailhead. 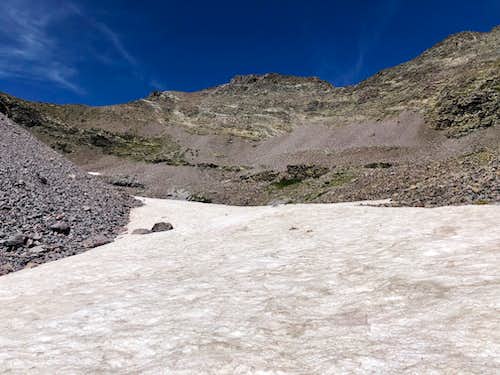 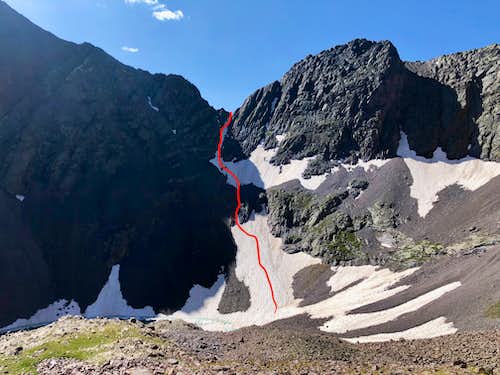 There are many routes to reach a summit. I will describe the one recommended the Guide to Colorado Mountains and the one I took. I chose to ascend on the 4th class SW ridge, which actually was fun and that hard. The route from Silex Lake on the northwest side of Mount Silex is another popular approach, shorter if coming from Hunchback Pass, but the couloir was interrupted with steep and loose scree in the middle and I had no ice axe and only soft hiking shoes. It may be fun earlier in the season when the snow climb is continuous and ice axe and crampons are a requirement. Per other climbers reports the couloir is about 40 to 45 degrees steep.

The map below shows my entire route, combination with Peak Seven and The Guardian. The approach via Stormy Gulch (along Trinity Creek) was easier than I remembered from the previous trip to Storm King Peak. I found a decent trail on the north side of Trinity Creek and gained the meadow below Mount Silex and Storm King Peak relatively quickly. There is a steep section of the slope to gain Lake Silex. The northern side is mostly grass and easy to ascend, higher up it is rocky. Lake Silex is surrounded by rocks, not a great place to camp. The route above Lake Silex - NW couloir was not in a shape and I did not have the proper equipment (no ice axe or boots, not crampons) since I did not expect late August to have the snow there. I continued to bypass Peaks Nine and Eight and headed for Storm King Peak and Peak Nine saddle. The route here is hopping on boulders. The descent from the saddle was easy with a faint trail. I headed SW towards Peak Eight - Peak Seven saddle, climbed up the north ridge of Peak Seven, descended the same way. Passed on the north side of a little unnamed lake and headed for the next, larger unnamed lake below Peak Nine (no time for Peak Nine on this trip, but the route would start here). Bypassed along Peak Nine and had to drop lower to gain a drainage between Mount Silex and The Guardian. Mount Silex was hidden for a while behind Peak Nine. The route up the Mount Silex went fast, most of the first section was covered with snow, which was not steep and I could ascend it in my hiking shoes (no spikes or crampons). Higher up I tried to gain the SW ridge and with a few short sections of 4th class moves gained the summit. The views are spectacular, especially King Storm appears very majestic. The summit had a small cairn and I left a glass register.

Traverse to The Guardian: I did descend about 200 feet and was hoping to see some cairns, signs of travel, and not to lose too much elevation. But there were NO cairn and signs of people traveling here. I ended up on some sloping ledges with loose rock and slowly traversed towards Mt. Silex - The Guardian saddle. Walking was slow, but never too hard. It was exposed, but always some other ledge showed up and moves never exceeded 2+, possibly a few class 3 moves. When I reached the saddle, there is a small hump, which I chose to bypass on the south side and headed for the east end of The Guardian. The slopes became easier here and less loose (see the Guardian for continuation). 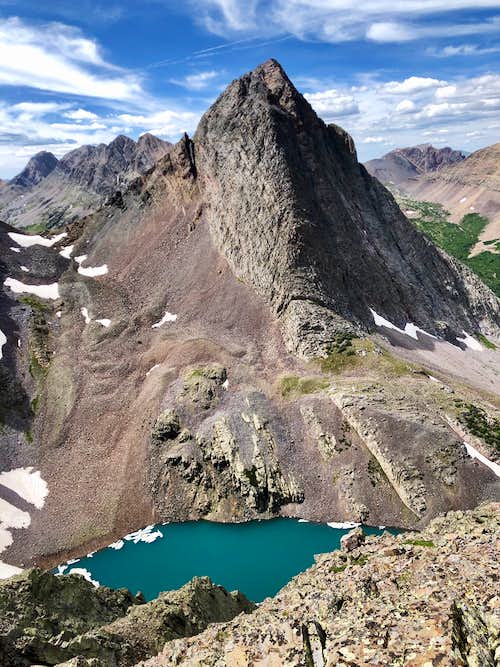 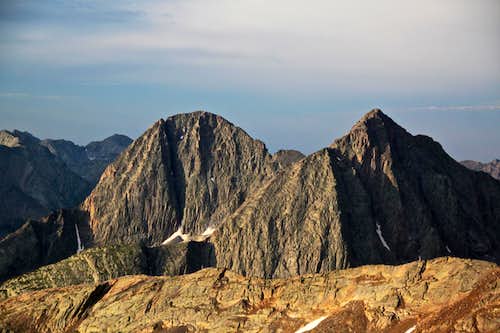 Mt. Silex and The Guardian as seen from the summit of Peak One
The peak is located within Weminuche Wilderness, so wilderness rules apply. Weminuche Wilderness is the largest Wilderness area in Colorado.
Follow the seven standard Leave No Trace principles while in the wilderness:
1) Plan Ahead and Prepare
2) Travel and Camp on Durable surfaces
3) Dispose of Waste Properly
4) Leave what you Find
5) Minimize campfire impacts
6) Respect Wildlife
7) Be Considerable of Other Visitors.
Wilderness Specific Regulations:
Group size is limited to no more than 15 people per party.
Camping is prohibited within 100 feet of any water source.
Camping and all campfires are prohibited at the following locations:
1. within 200 feet of Archuleta Lake, Fourmile Lake, and West Ute Lake
2. within 1/2 mile of the north shore and 1/4 mile of other shores of Emerald Lake
3. within 1/4 mile of Little Emerald Lake
4. between the shore and Flint and La Osa Trails at Flint Lake; and within 200 feet of the west and north shores
5. in Needle Creek drainage at Twin Lakes
6. in the hot springs area at West Fork (Rainbow)
Campfires are also prohibited in all of Needle Creek Drainage (including Chicago Basin) and Vestal Basin.
Do not shortcut switchbacks.
Pets must be under verbal control or leashed at all times.
Disposal of human waste and wash water is prohibited within 100 feet of any water source.
As with all designated Wilderness areas, mechanical transportation (including wagons, game carts, wheelbarrows, bicycles, or other vehicles) is prohibited.

This peak is very remote. Winter would mean a very long approach through avalanche-prone terrain. The best time to reach this peak is summer and early fall.

There is a plentitude of backpacking and camping in the wilderness. Nice campsites are along Vallecito Creek, in Stormy Gulch along Trinity Creek, along the unnamed lake just below Peak Seven, Balsam Lake on the west side of Peak Seven, or along Leviathan Creek below Mount Silex and The Guardian.

There is also camping at the Hunchback Pass Trailhead and along the Beartown road on your drive in.