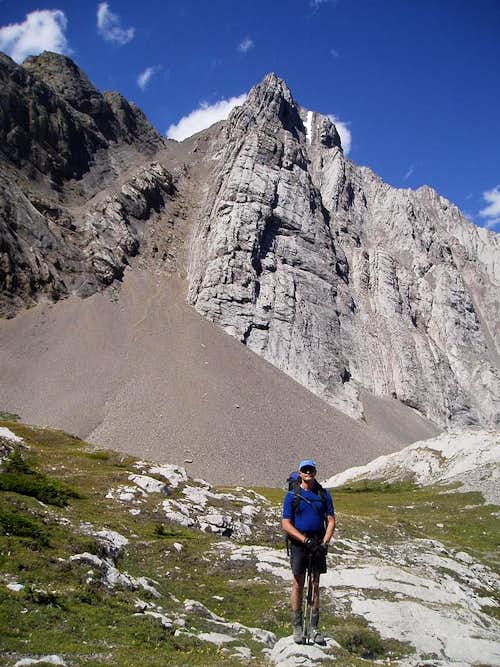 Unroped scrambling is a dangerous activity and everyone should read the complete introductory section of Alan’s book before rushing off to do any scramble. As with many other scrambles books, Kane's scrambles rating system is unique to his book (and to the Canadian Rockies) so take the time to relate it to your experience level. Always scramble well within your abilities and be prepared to back off if you are unsure of your route, the conditions or your abilities. You are responsible for the consequences of your decisions.

This scramble is described in the guidebook as a difficult climber's scramble and is mostly class 3/4 with several sections of YDS 5.3 if on the easiest line. Many people with a climbing background enthusiastically scramble near the ridge crest which is solid rock but slabby with mainly friction moves and which goes at a very exposed 5.4 to 5.5 depending on the line you pick. More cautious scramblers are more likely to spend the time to find the easiest line which is a 5.3 groove/chimney to the right of the ridge crest. A rope, protection and the ability to use them properly is recommended for anyone who is not comfortable scrambling class 4 and easy class 5 routes.

We did Smuts in July 2005 and I have assembled my pictures and pictures from various friends to try to give a better overview of the route and show the lines on the ridge. Thanks to Linda Breton, Antri Zhu and Ken Takabe for the use of their pictures. 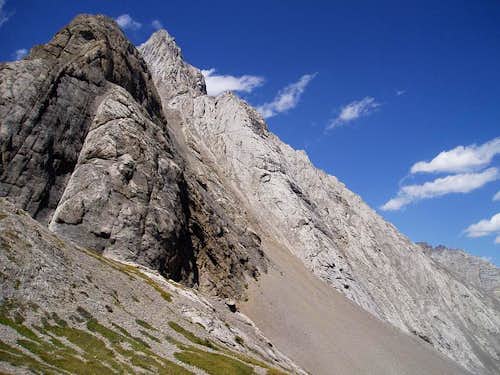 This is a steep ridge but note that the telephoto foreshortening and the camera angle make these slabs look steeper than reality.

The Scramble and Route Discussion

The route starts up a scree gully on the left side of the ridge and it is easiest to go up the slabby rock(a staircase) on the right-hand side of the gully.
Base of scree gully beside ridge. Photo courtesy of Ken Takabe. 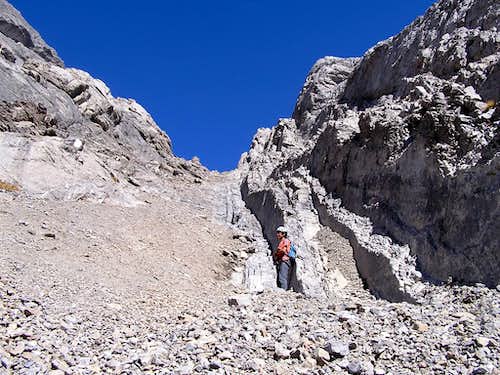 Looking down scree gully - Linda on the staircase rock. Follow the staircase until it ends and then go up further until after wall ends on left and then traverse back right to ridge crest on ledges(cairns). You can scramble up to the right near top of staircase but that route requires crossing difficult down sloping friction slabs to connect to the gully route. 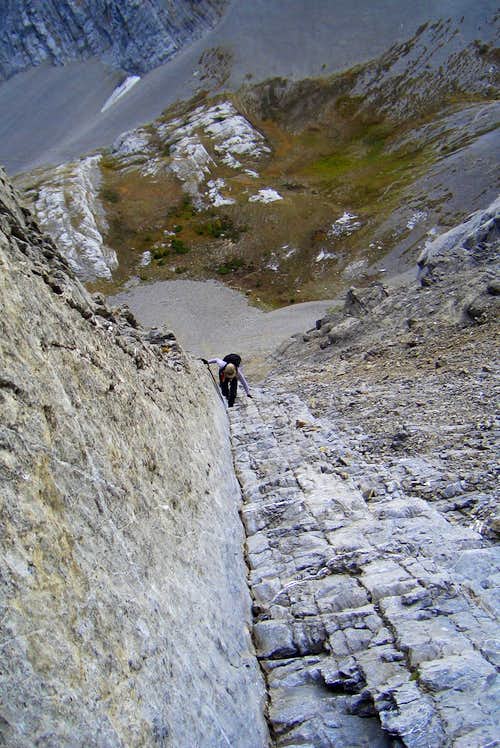 There are 2 main steep steps or sections above where the route traverse on ledges back right and joins the ridge just above lower step B. Above the two steep steps the ridge lays back and becomes easier but narrower. The steps are where people can get into trouble by following the crest of the ridge which is harder than scrambling(5.4 to 5.5 slabs).  Cross over ridge crest to grooves to the right of the crest that are about 5.3.  There is a big dark gully further right and lower which apparently also goes but it appears quite loose.

Telephoto's of the South Ridge showing routes. Not as steep as this looks!
From slightly to the left(West) of the ridge. 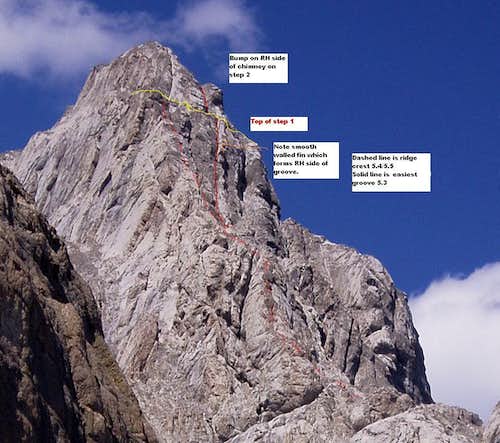 From slightly to the right(East) of the ridge. The ridge crest climb route(5.5) is on left(lots of room for variation) and the scramble gully/groove route with 2 options (forms a Y) as it splits. Both grooves go at about 5.3. The big dark shaded groove to the right has loose rock but apparently it also goes and may be lower angled. All 4 routes meet at the big ledge on top of step 1. 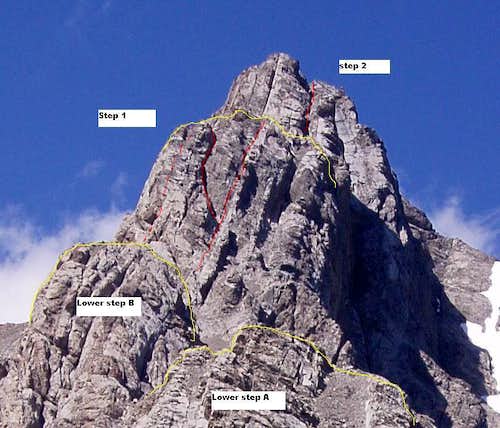 After passing the top of the staircase and the end of the wall on the left, the route transitions from the staircase/scree gully by traversing back to climbers right using stepped ledges onto the ridge crest(cairns). You come onto the ridge crest just above lower step B. Crossover to the scramble groove just to right of crest.  There is no way to crossover higher up until reach step 1.

Just after the transition from scree gully (aka staircase gully) on ledges(in lower right) onto the ridge crest. Note lower steps A and B that are noted in the route pictures. It is probably easiest to cross over to the RH gully near here if desired. 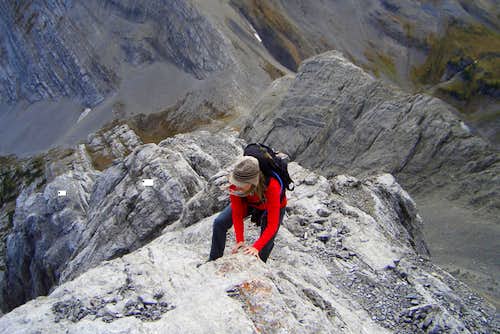 The tendency as a climber is to follow the best solid rock when a line looks easy and it obviously goes from a climbing point of view. We powered up the 20 to 30 ft wide slabs on the ridge crest and were surprised at how steep and slabby it was in spots. The crest is 15 to 20 m wide so there are many potential routes but generally up to 5.4 or 5.5 (slabby and very exposed).

This is looking up the ridge crest where we went. Note smooth walled fin to the right in upper right of the picture that is near the top of the easier groove which is 15 m right off the ridge crest. 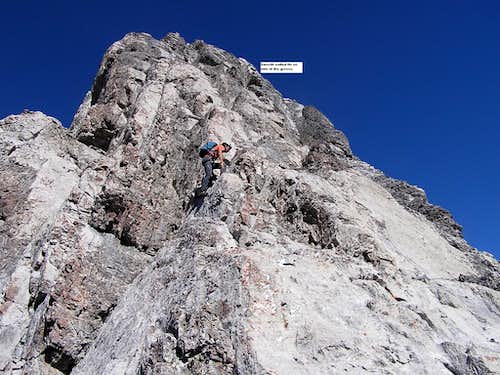 Scrambling ridge crest just below the ledge at the top of step 1.
Picture courtesy of Ken Takabe. 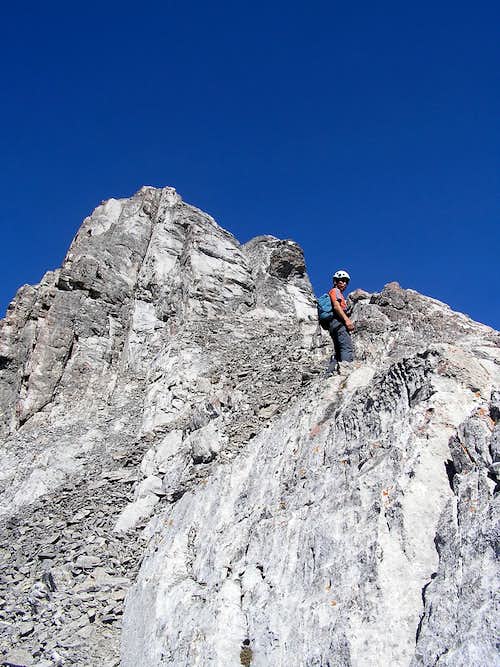 Looking right we could also see the easier grooves about 30 ft away but there was no way to move off the crest and over into either groove. We passed a 2 pin rap/belay station on the crest. At the top of the first step is a large scree-covered ledge.

From the large ledge the crest above looked harder so we investigated to the right and found a small cairn at the top of the easier grooves that we had bypassed.

The grooves(Kane route) are to the right and off the crest by 20 – 30 feet and lower. They go at 5.3 but are steep and the right one has a smooth walled fin on the right hand side. The left branch off this groove(see second route pic) also goes with a few harder moves at the start as per Kerry Vizbar. The large shaded groove that is further right in the second route picture is reported to be loose but apparently it also goes but is looser.

The best way into the grooves is to cross over the crest when you first gain the ridge.

Antri scrambling in the lower part of the 5.3 groove. 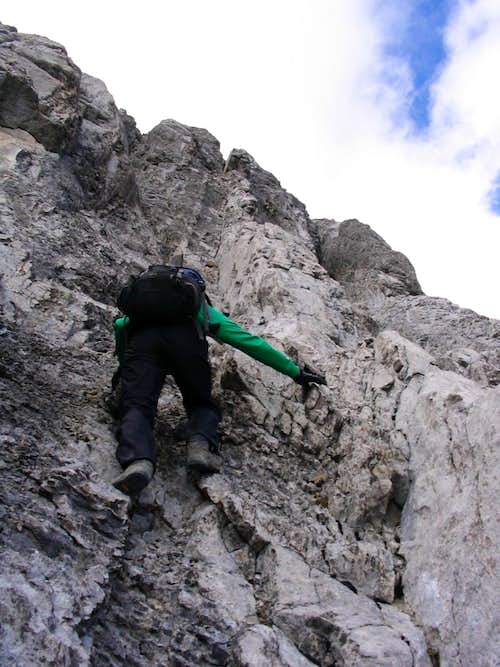 Scrambling in the groove on step 1. Note the smooth-walled fin on the right-hand side of the groove above Antri's head on the skyline. If you refer back to the second route picture, Antri is at the junction where a left-leaning groove/chimney takes off from the 5.3 groove. The left branch also goes according to Kerry V and Marko.
Picture courtesy of Linda Breton. 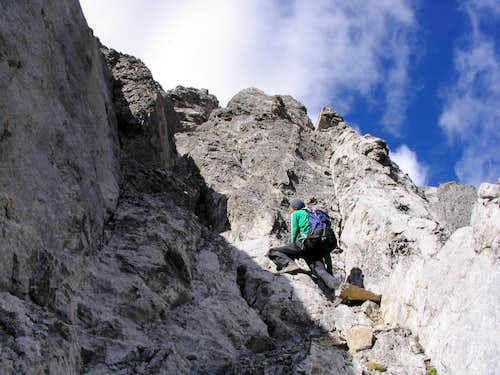 Looking down the groove. Note lower steps A and B. and the ridge crest to the side. You come onto the crest just above lower step B and it is easiest to cross over there to get to this 5.3 gully.  Picture courtesy of Antri Zhu. 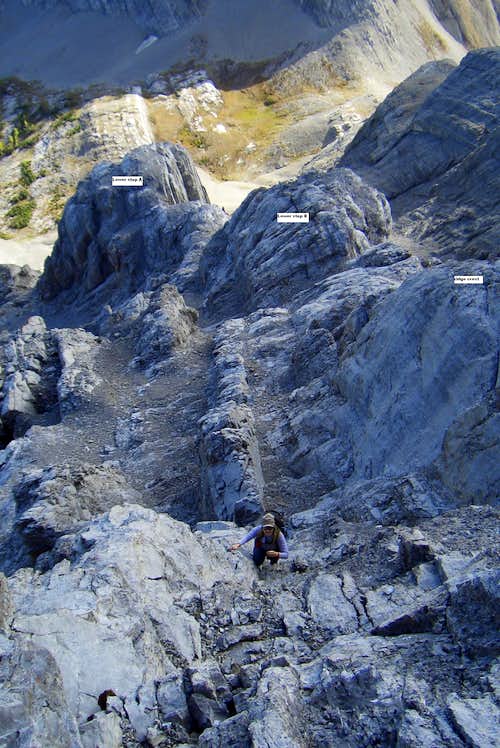 Scrambling in the groove on step 1. Note smooth-walled fin on RH side. There was a two piton rap/belay station in the groove near here at that time although I have heard that one pin has now pulled out. Picture courtesy of Linda Breton. 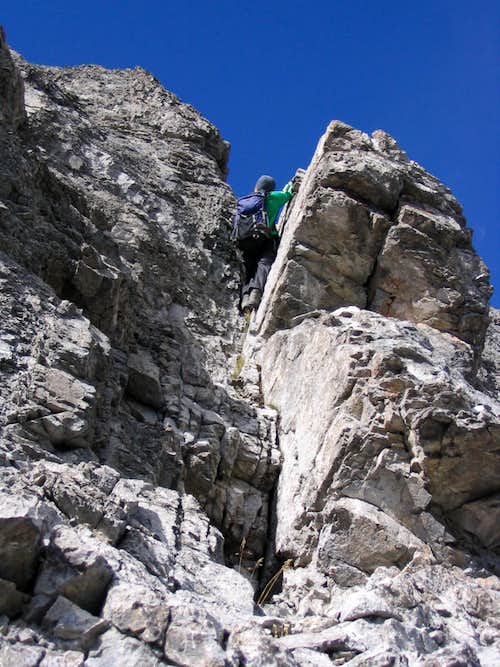 Looking down the groove on step 1. Note smooth-walled fin on scramblers right. Note that this picture is similar to the picture in the guidebook. Photo courtesy of Antri Zhu. 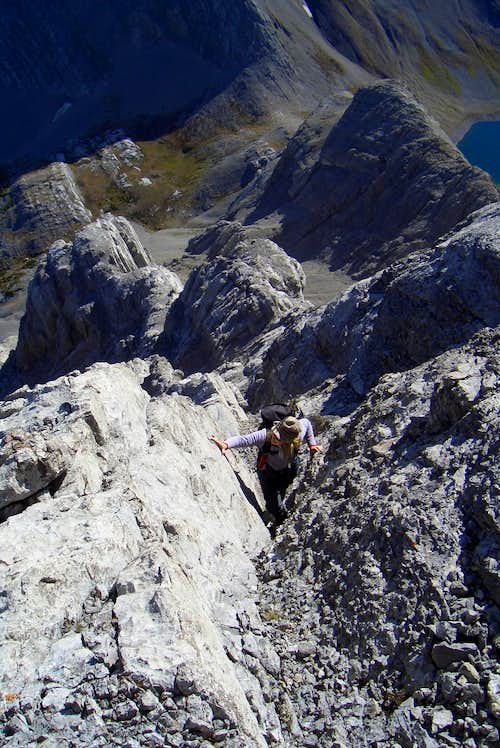 Looking up at step 2 from the ledge at the top of step 1. Note the groove/chimney to the right and the bump on the RH wall against skyline. 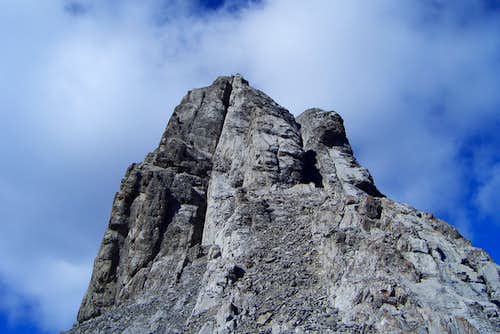 We then scrambled up to a smaller ledge and around to the right (exposed to east/right) to a groove above to the right of the crest (5.2 to 5.3) which led to a ledge on the side of the ridge.

Antri scrambling around to the groove on right side of step 2. He is about to cross above a (smooth?)slab that is exposed to the East which may be the Kane crux? Note bump on right skyline. 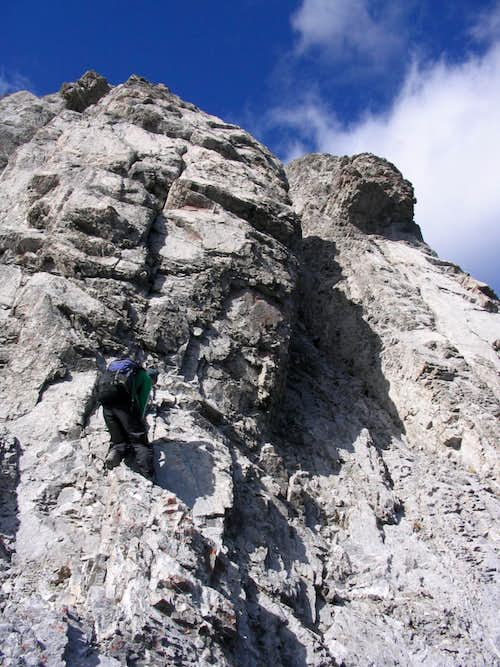 Mako in the groove on step 2. 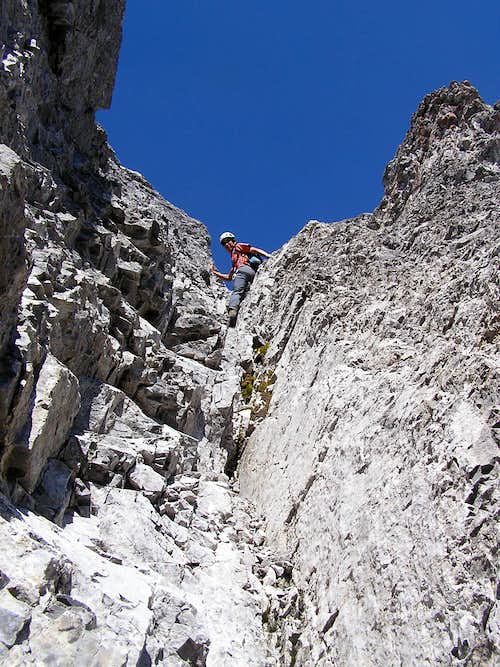 Looking down the chimney on step 2. Note the size of the scree ledge at the top of step 1 and where the groove comes out. 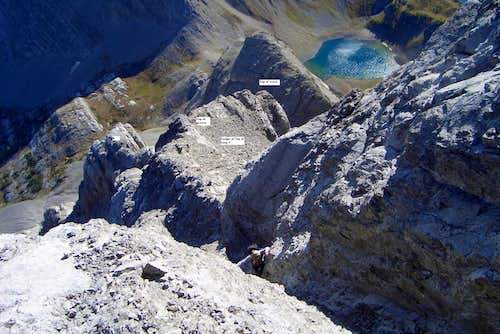 At the top of this chimney, there were possibilities to regain the ridge(apparently not that hard according to Marko) but we then followed ledges(exposed to right) along the right side to the final groove/chimney (5.2).

Mako on ledges on right side of ridge approaching the final groove/chimney before regaining the ridge crest. 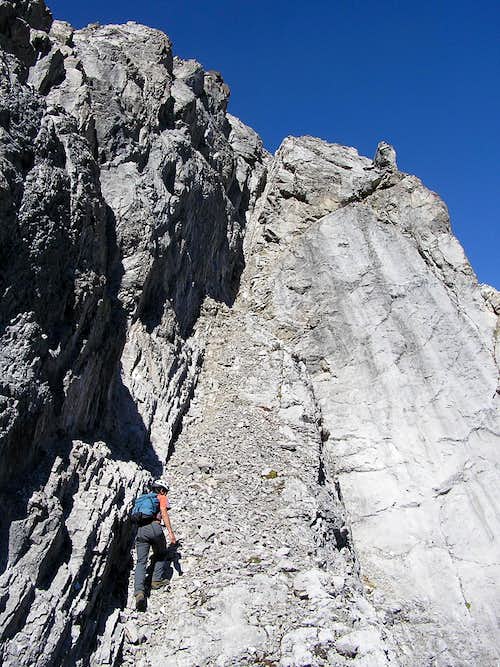 Antri in the final groove. 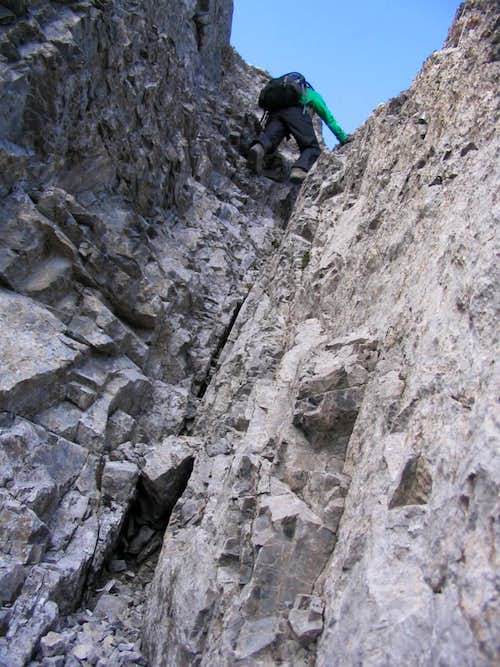 The final groove goes to a ledge and then we could go left and back onto the easy part of the ridge crest. There was a bolt and rap ring as you come onto the crest which you could use to rap step 2 if you go back down this way although I expect you would need a full rope rappel or perhaps there is a single rope station. 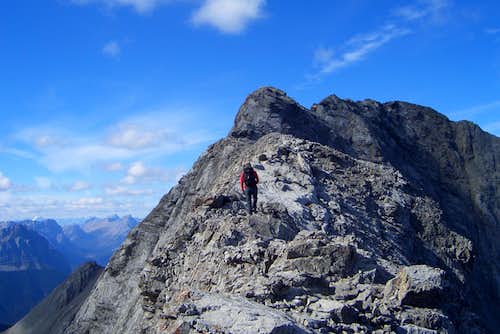 Looking South along Summit ridge. Mount Birdwood on left and Mount Sir Douglas with glaciers in the center. 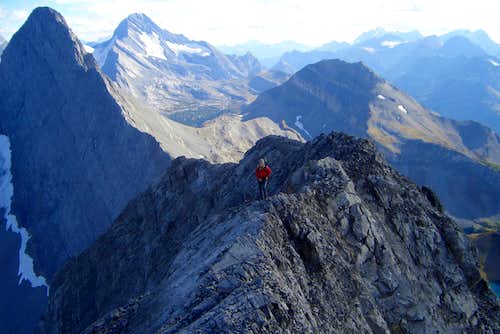 The Kane descent gully is found by following the top of the ridge to the west end where it would require downclimbing. Despite signs of a trails - Do not take any other gully as they are steep and slabby. There are two entrances marked with cairns to the Kane descent gully off the left of the ridge. The first entrance now has a two piton rap station on the left side. The two entrances meet up about 10 -15 m down the gully.

The gully is quite loose and the steps and slabs can be gravelly early in season. It is best if one person moves at a time. 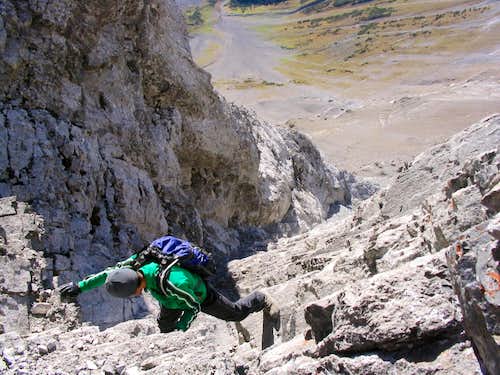 Descending ledges after exiting the descent gully. At bottom of gully go skiers left on a ledge and up slightly to a small cairn. 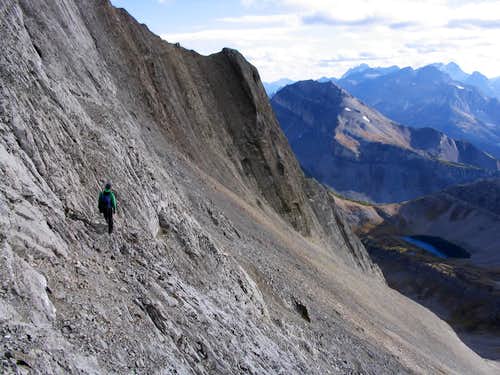 Whoaa! The photos and the trip report are excellent right now. Love to see the finished product.

Thanks- I needed to add some more comments and explanations on the pics. Enjoy.

Great TR Bill. I'll see if I can dig up any pics to add to the report.

Thanks - put up any pics you want and I can attach them.

Looks like tons of fun. I think I will keep this for a later date, makes me feel good it's still on my list. Amazing set of photos, fantastic labeling etc. Thanks!

Looks like you put a lot of work into this report, Bill. I really like the photos with the routes mapped out; they give a great perspective on the ascent options.

Thanks for the compliment Linda, and thanks again for the use of your pictures.

And very helpful to me, as I hope to climb this mountain this summer.

Thanks - It is a fun climb.
Take care.
Bill