Located between the Sultan and Skykomish River Valleys, Mount Stickney is a prominent and noticeable peak while driving highway 2 eastbound. Getting to the top requires a bit of route finding, bringing the right gear and some extra push for the first 4 miles. You'll be either walking, biking, skiing or snowshoeing to get yourself to the good stuff. Because of the low elevation start and it's western location in the Cascades, Mount Stickney makes for a good winter ascent. According to the Cascade Alpine Guide, Stickney was first named Prospect Mountain but later dedicated to a prospector who spent years on nearby claims. It is said he went to Alaska in 1898 and was later killed by wolves. 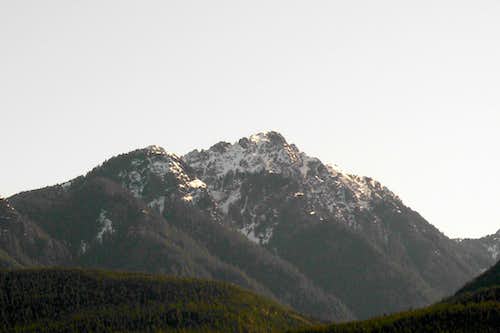 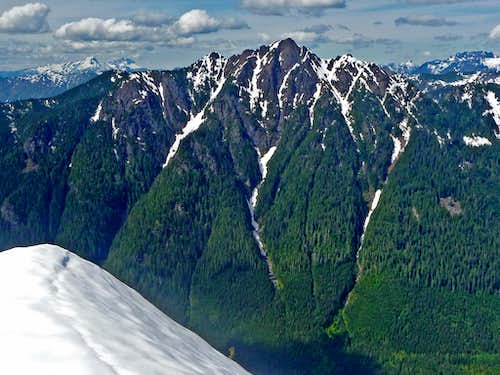 Looking from the summit of Mount Zekes, photo from Flow 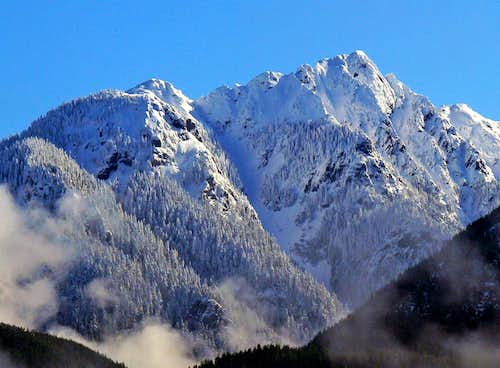 Stickney in Winter, photo from Flow

Take Highway 2 east from Monroe to Sultan, then a left turn on the Sultan Basin Road (a traffic light east of town center). Follow the Sultan Basin Road for 11.5 miles, then turn right on Olney Creek logging road until it becomes impassable, usually within a half mile (or gated at the start now Sept 2012). 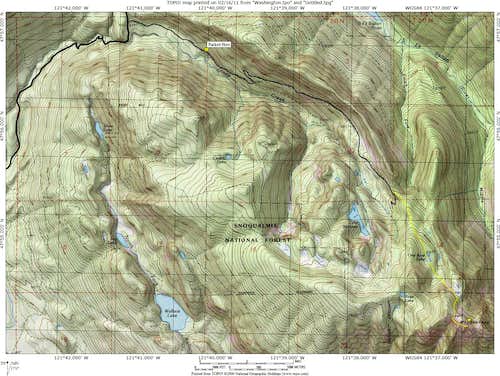 Here are the route directions according to the Cascade Alpine Guide, they are good. In winter, it's straightforward following the topography on the map. Hike the roadway about 200 yds past the ridge saddle, then turn onto a forest path to a crest; then along the ridge until the path fades at about 4200 ft. Continue SE to a pond NE of point 4875, then hike SE to the crest of another ridge. Traverse on an open slope SE and S into the rocky summit basin. Scramble a talus/dirt slope to the summit ridge, then follow the crest E to a small plateau. Walk or scoot across a short exposed ridge section to teh summit hump; walk to the top." In winter, most groups rope up for the gulley to reach the summit ridge. 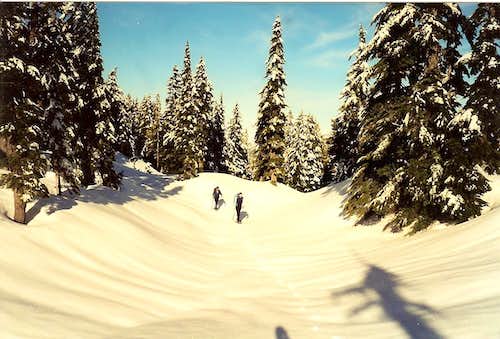 Hiking to One Acre Lake 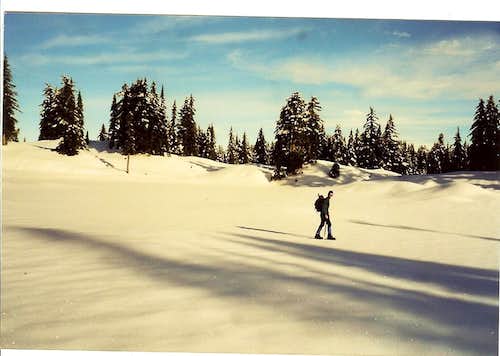 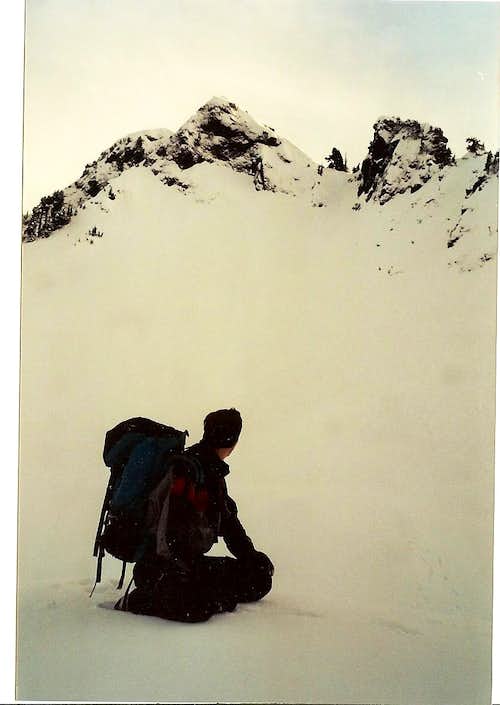 Resting for the summit bid 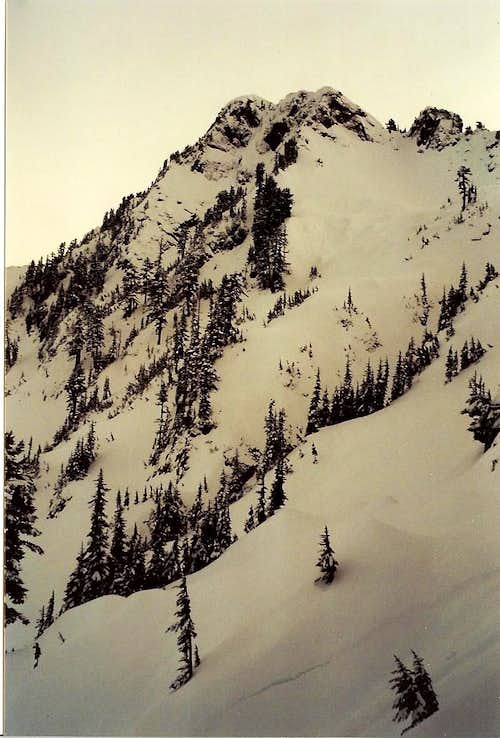 First view of route up Stickney 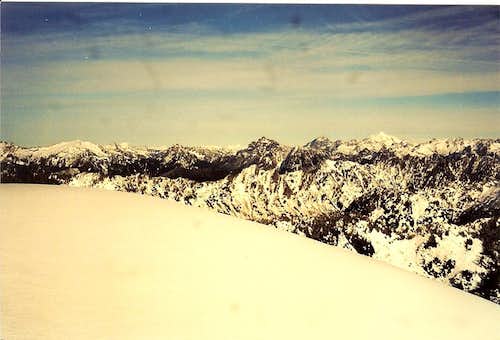 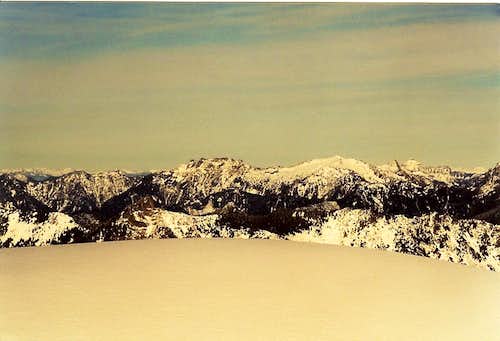 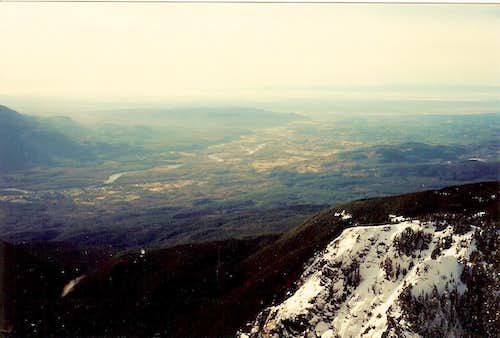 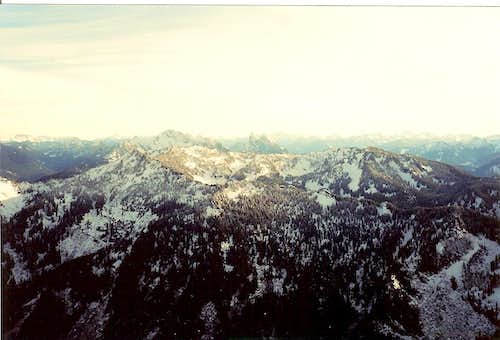 Finally managed to climb this one after several attempts. Olney creek logging road is gated at the beginning now (still). The road itself is quite rough and in the snow was difficult to follow. On one attempt I missed the first turn and scrambled up a 600-foot hill to get back to the road. If you use Gaiagps, the road on the map is not correct. IMHO this is far better in snow. The photos I have seen of the scramble route without it look rough. I was solo and handled the gully just fine, but I could see why some would want a rope for it. I have a full topo map on my site at https://hike2hike.com/mount-stickney-climb-wa and also made a video of the winter route you can find at https://youtu.be/YDtPYHcyO8o