Mount Tabor is an extinct/dormant volcanic vent (part of the Boring Lava Fields) in the SE section of Portland, OR. Portland's Mount Tabor makes Portland one of only two cities in the continental U.S. to have an extinct volcano within its boundaries; the other city is Bend, Oregon. The volcano is a highly popular city park, encompassing 195 acres and including a basketball court, play area, a restroom, picnic area, dog off-leash area (located on the south side near the Harrison entrance), picnic tables, playground, and tennis courts. There are also three open reservoirs on Mt. Tabor serving the city of Portland; they are part of the city’s historic switch from Willamette River water to high-quality water from the Bull Run watershed 120 years ago. It is named after Mount Tabor in Israel, which sits six miles east of Nazareth. At the summit is a bronze statue of Harvey W. Scott, editor of The Oregonian newspaper from 1865-1872 and from 1877 until his death in 1910. 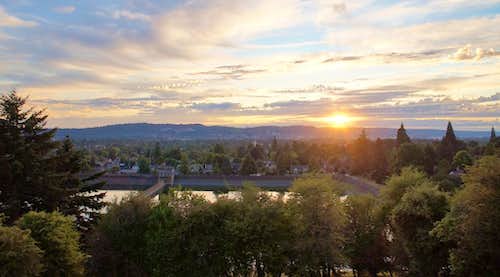 Top reservoir from the summit of Mt. Tabor

View of Mt. Tabor from the Pittock Mansion 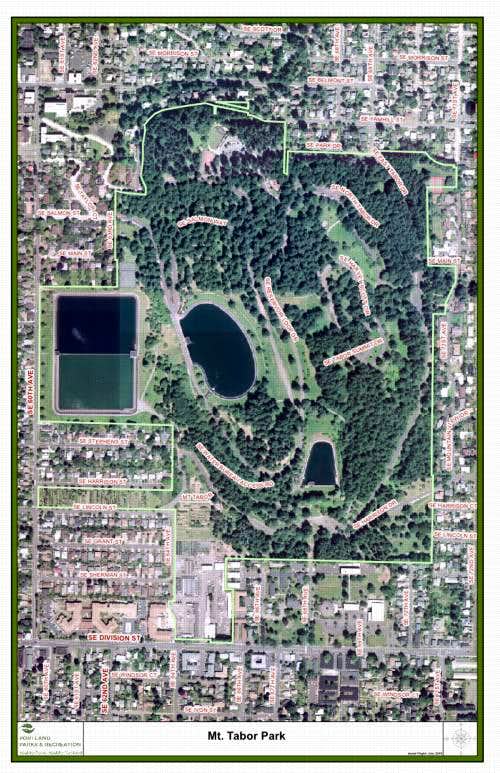 The best route is to begin on the west side of the park, on 60th Street. Hike up the stairs near Hawthorn and 60th to the lowest of the three reservoirs in the park. Turn right to circle south around the reservoir. The water is piped down from the Bull Run Watershed on the western flanks of Mount Hood.

When you reach the west side of the reservoir, take the stairs that will lead up to the next oval shaped reservoir. Turn right on the access road and look for a trail heading up uphill on your left. This trail goes over a small hill and drops down again above the third and oldest reservoir in the park. Cross the access road on the trail to continue to the summit. This side of the park provides a natural wooded setting amongst huge Douglas-firs. Unfortunately, English ivy and blackberry bushes have invaded the understory. Soon you will reach a five trail junction. In the center is an old streetlight with a mossy patina. Turn left here to reach the summit. 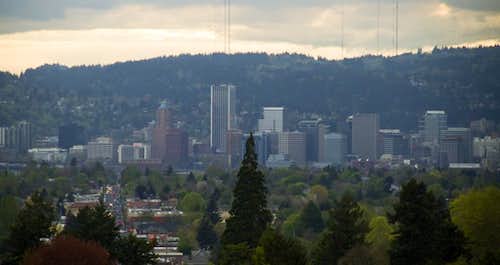 Downtown Portland from the summit of Mt. Tabor

A circular drive surrounds the top of the hill. It's is closed to cars, but there are usually plenty of cyclists, trail-runners and dog-walkers enjoying the summit. Birders with binoculars are often trying to eye the hundreds of species found in the park. From the statue of Mr. Scott, traverse northerly across the grassy hilltop amongst towering Douglas-fir trees. When you reach a bench near a large multi-trunked bigleaf maple, stop for a view of Mount Hood to the east. Continue north downhill past the playground to visit the crater, where there's an amphitheater and a basketball court. Turn west from the basketball court and look for the blue signposts to find Skunk Canyon, filled with salmonberry and small cedar trees. At the bottom of the canyon trail, follow the signposts across the access road, and past the tennis court to return to the lower reservoir and 60th Street.

All told, the hike is a quick ~2 miles RT with only 350 ft of elevation gain.

Any time of year. It can get hot (and crowded!) in the summer.

No camping is available in the park, but given that Mt. Tabor is right in the middle of Portland it's sort of a moot point.