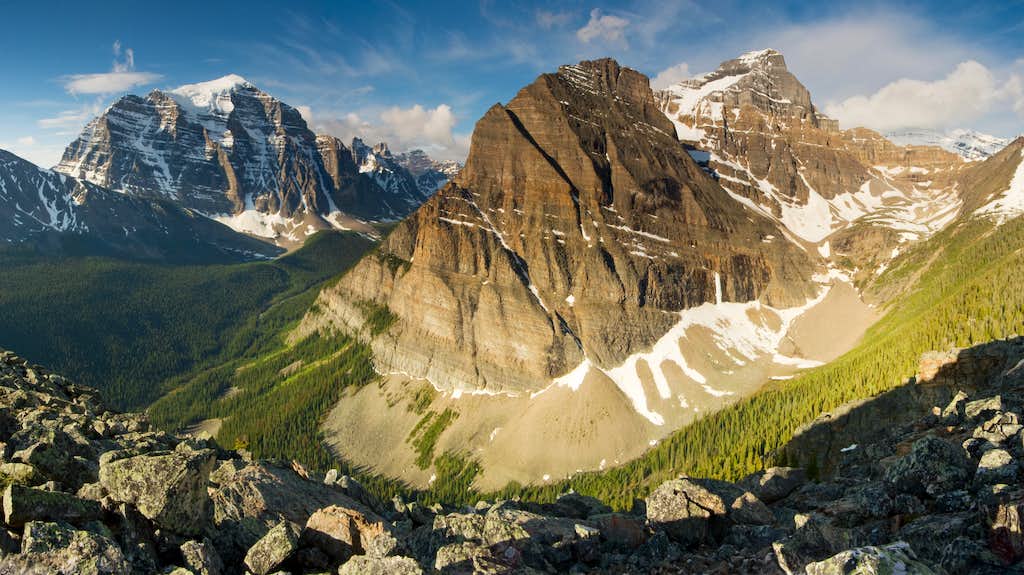 Although not as frequently scrambled as nearby Fairview Mountain, Saddle Mountain (2420 metres), provides a wonderful--and in my opinion, better-- viewpoint for the iconic peaks of the Lake Louise area. Mount Temple (3543 metres) dominates the view here, looming as it does above Paradise Valley. Pinnacle Mountain (3067 metres), Eiffel Peak (3084 metres) and Neptuak Mountain (3237 metres) are the peaks to the right of Temple in the background. Unfortunately, the pointed summit of Deltaform Mountain was hidden by clouds. The brown peaks right of centre are Sheol Mountain (2779 metres) and Haddo Peak (3070 metres). To the right of Haddo, clouds cover the upper half of Mount Victoria (3464 metres). I composed this image in the early morning of June 23, 2008. Five vertical frames make up the final image. I used a Canon XTi with a 15-30 Sigma lens to include both the sky and the foreground talus.

Makes me want to be there right now!

Thanks to everyone for their kind words. I have been a member of SP for a year, so I guess it was past time I contributed something!

What a nice shot. I'll be there in October, so looking forwards to it!

If you are there in early October, there might still be some golden larches to further enhance the scene. Throw in some fresh snow to accentuate the features of the peaks, and a blue sky day like I had...well, that's my idea of Heaven. Good luck!

By chance do you have any beta Saddle? There's no page for it here on SP and that looks like a view worth checking out.