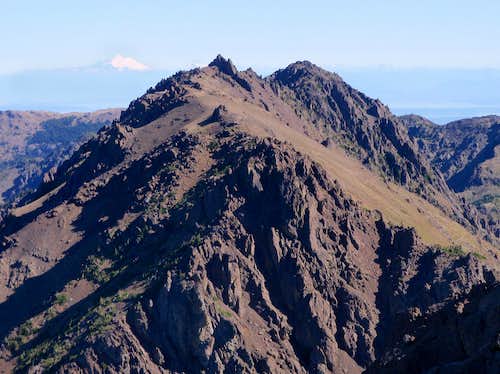 The Southwest Face With Mount Baker In The Distance

Formerly called Copper Peak, Mount Worthington was renamed by Jack Christensen for William J. Worthington and associated family, who were pioneers in the town of Quilcene in the late 19th century.  At 6938 feet, Mount Worthington is fairly high by Olympic Range standards, ranking 27th to be exact. Located on a high ridge, east of Buckhorn Mountain and Iron Mountain and west of Hawk Peak, Worthington is flanked by Copper Creek to the north and the Big Quilcene River to the south. The majority of the south face is open-sloped with plentiful scree. The north face is more rugged with scattered cliffs, steep ridges and a complex array of broken slopes. Overall, the forest ends abruptly at 5000 feet so the top 2000 feet of the mountain is completely bare. 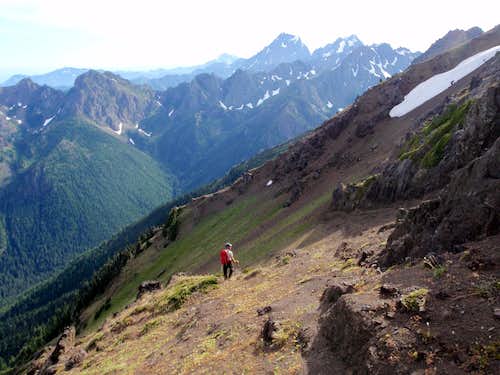 High On The South Face

The summit is a 25 foot high basalt fin formation. Without any established trails leading all the way to the summit there is no claim for a standard route. The mountain can be approached from a number of different trails but inevitably route finding and off-trail travel will be a necessity. The most straight-forward way to approach Worthington is from the Tubal Cain trail. See the route section for more information. 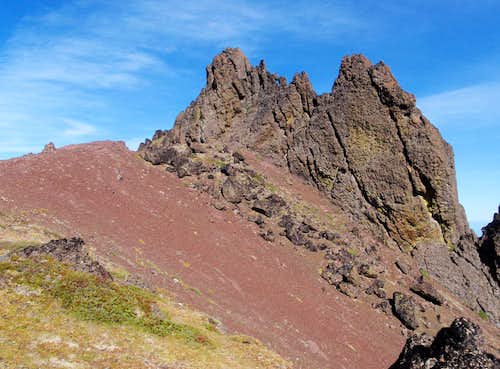 Near the base of the mountain, to the north, is the historic Tubal Cain copper mine which was in use from 1902 to 1906. The strange name is a reference to the bible (Genesis 4:22). The mine, which penetrates 1500 into the rock, was abandoned after several collapses. The 100-year-old remains of some of the miners villages can still be found in the surrounding valley.

At the base of the northeast ridge of Worthington, in Tull Canyon, is the wreckage of a crashed B17 bomber aircraft. For many hikers, this downed plane is the main attraction. On January 19, 1952 the B17 with a crew of 8 was returning from a failed attempt to rescue members of another crashed plane. During the return flight they caught in a blizzard with heavy snow and high winds. Then the navigation and radio equipment failed completely.

With no visibility, the left wing slammed into the trees and the plane crashed. The pilot was thrown free of the aircraft and the plane slid over the top of him, continuing on a downhill trajectory until coming to rest near the bottom of the northeast ridge of Worthington. Amazingly, only 3 of the crew of 8 were killed. The remaining 5 were rescued by helicopter the following day. Check out Mike Morrow's site for pictures taken by the survivors of the crash.

There are three main ways for reaching Mount Worthington. All of them involve off-trail travel. Only the easiest route, Tubal Cain, will be described here. But for those interested in more of a challenge, Worthington can also be approached from Marmot Pass (Big Quilcene trail) to the southwest or Silver Lake and Hawk Peak to the northeast (Mount Townsend trail). Both of these alternative routes contain a higher degree of scrambling and navigation difficulty. 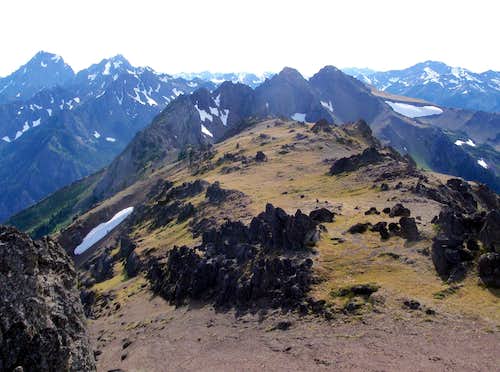 It should be noted that the only route which the Olympic Mountains Climbing Guide mentions is a direct ascent of the south face though horribly dense forest and seemingly never-ending grassy slopes with hidden small boulders. For those coming from Marmot pass, it is possible to traverse the crest of the ridge along both summits of Buckhorn Mountain to Iron Mountain and then go from Iron to Worthington, but several sections of this route are confusing and dangerous. Downclimbing the east face of East Buckhorn is exceptionally difficult. Please see the External Trip Reports section for links to more approach information on some of these alternatives. 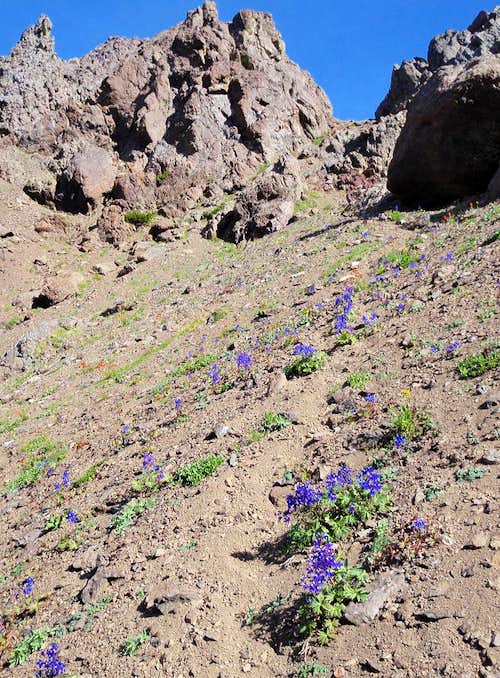 Lupine Growing In Loose Scree Below The Iron / Worthington Saddle

The next goal is to reach the col between Mount Worthington and Iron Mountain. Ascend loose scree slopes which may be snow covered depending on the season. At 5900 feet the small upper basin has a flat somewhat level bottom. This little basin is where two routes diverge. If you have the time during your return journey, Iron Mountain can also be accessed from this point. For Worthington, turn slightly more to the east and continue to ascend loose slopes to the col at 6420 feet. 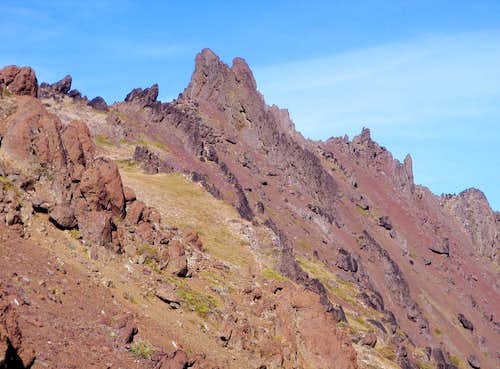 From the col, the route becomes easier again. Ascend open slopes in an northeast direction aiming for the summit block fin formation. The summit fin is a short easy scramble although there is some exposure on the summit. Starting below the southwest face of the summit fin, descend a few feet to the left of the ridge crest to gain access to a crack. Scramble 10 feet up an easy crack and then follow along the top of the fin to the summit. See this route photo. There is a register in a PVC pipe. 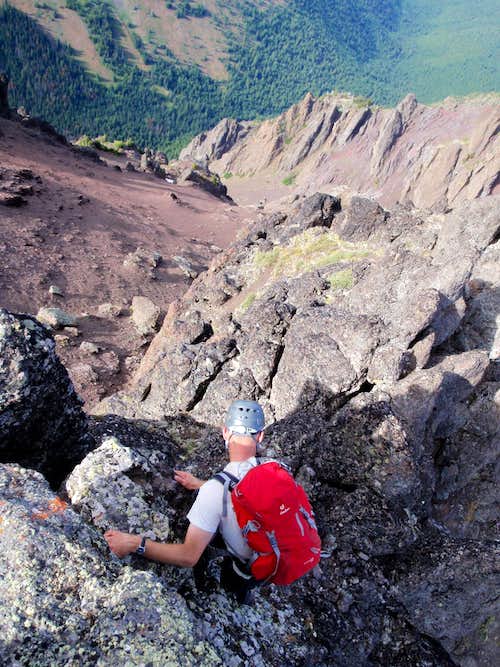 Scrambling On The Summit Fin 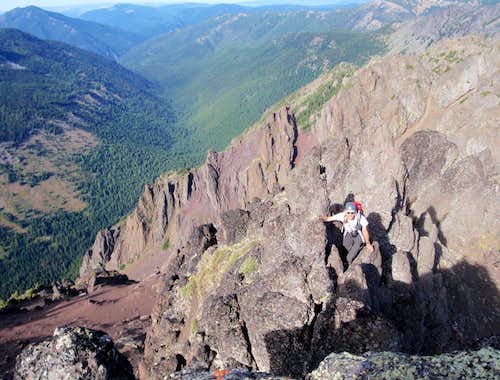 Scrambling To The Summit 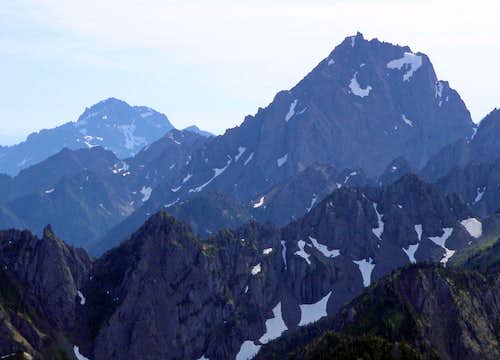 The Brothers And Mount Constance Seen From The Summit

Summit of Mount Worthington from Team Schmidt on Vimeo.