Mount Zimmer is not a difficult mountain to climb, but it is not easy, either. Unless I am mistaken, the easiest way to the summit is Class 3, and I know from experience that Class 5 routes exist as well. Before technical climbers get excited, though, they should consider that there probably is a reason this peak is not among the classic Beartooth climbs. That reason is poor rock quality.

For scramblers, though, this peak is a fine objective. Many high Beartooth Peaks have long approaches, but Zimmer is one of several peaks in the Goose Lake area. It is about a six-mile hike on a 4wd road to Goose Lake; with the right vehicle, one can drive all the way to road's end and make the one-way trip to Zimmer's summit as little as 2-2.5 miles. This relatively short access by foot or by vehicle makes the area a great place to spend two or three nights and climb several peaks.

People into lists of ranked peaks may not need to climb Zimmer, for it appears to rise only around 200' from the lowest point on the connecting ridge between it and its slightly higher neighbor to the north, Iceberg Peak. But it is worth climbing and considering as a unique peak for a few reasons: first, and most obviously, it has a name; second, it has its own distinct form; and third, the connecting ridge between it and Iceberg features a series of Class 5 notches and pinnacles that serve to provide a clear separation between the two peaks. 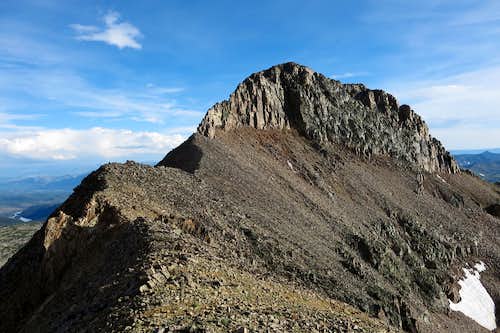 Zimmer from the Iceberg-Zimmer Traverse 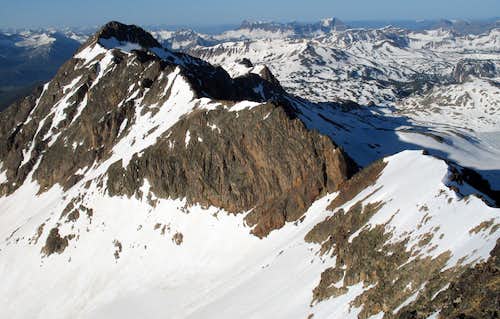 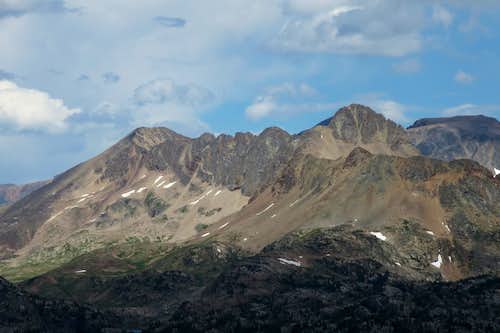 Shortly east of Cooke City, turn north onto a road signed for Lulu Pass. Drive nearly 3 miles to the intersection of the road to Lulu Pass (left) and the road to Goose Lake (right). There is some room to park here. If you do not have a true 4wd vehicle, preferably with skid plates, park.

Warning: this is a true 4wd road. Chances are, if you are in really good shape, you can hike the road faster than you can drive it.

After hiking or driving to the road's end, hit the trail and make camp somewhere before or near Goose Lake.

From the summit, I thought the easiest way up might be via Zimmer Creek and then the unnamed lake slightly southwest of the peak, but after looking at maps, I'm not so sure one wouldn't run into bad cliffs.


Instead, this page will cover one route that I know will work and one that I'm pretty sure will work if you have the right gear or a lot of nerve.

One-way distance is about 2 miles and 2800' from road's end. It might be as easy as Class 3, but go expecting Class 4.
Along the way to Goose Lake, notice the ridge to your right. Get up on that ridge either before or after passing the unnamed lake south of Goose Lake. The going will be Class 3-5; it depends on how you go. Once atop the ridge, head over the easiest ground to the steep talus slopes leading to the true summit ridge above. Views are awesome, so use them as a reason to stop and rest. 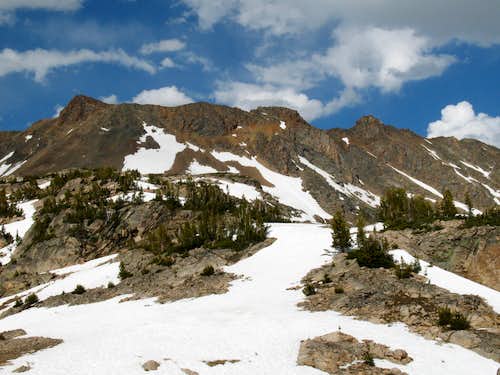 South Ridge of Mount Zimmer
After reaching the crest, follow it. When you reach a deep notch that from a ways back looks pretty bad, just scramble down Class 3 terrain. Now work toward the summit, generally staying right of the crest.
By the time you reach the notch below the actual peak, you will have two choices. The first is to ascend what looks to be Class 4 terrain directly toward the summit (it was slick from rain when I was there, so I decided to try to find something easier and safer. 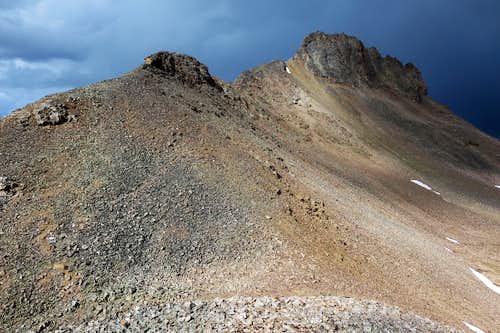 Approaching the Summit
Although I never did find anything drier, I did, after some looking around, find something easier and safer. It was by working along the east side of the summit and then scrambling S/SE to the top. That way was Class 3-- maybe a little harder due to the wetness, but still Class 3. 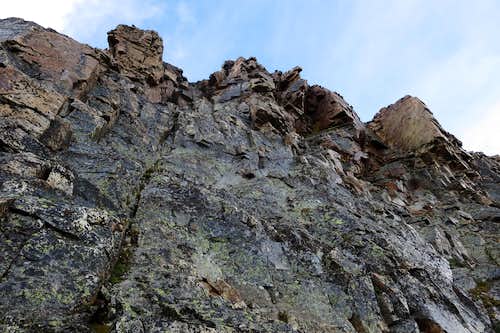 Always one to look for a different way down than I went up, I calculated I had enough daylight left to traverse from Zimmer to Iceberg, hike the easy slopes from Iceberg down to the pass below it, and then take the trail back to Goose Lake. It would be Class 3, or so I thought.

Summit View-- Iceberg Peak
Instead, it nearly turned into a mini-epic.
Between the two summits, and mostly hidden from the views atop them, are several notches and pinnacles that go at Class 5. Although it is "easy" Class 5 in the technical sense, the rock quality is horrible (what you think are holds routinely move or pull out entirely), making pro virtually useless and rappels a very dangerous idea.
Disclosure: I did not complete the traverse. After the surprisingly difficult conditions burned up more time than I had budgeted, I was looking at a cold bivy up on the ridge unless I could find a bail option. Finally, I did, at what seems to be the next-to-last notch between Zimmer and Iceberg. A really sketchy Class 5 downclimb got me into the notch, and then I joyfully found that the couloir went non-technical all the way to the basin below; this was after already doing two Class 5 downclimbs from other pillars and into other notches and down other couloirs that only cliffed out. 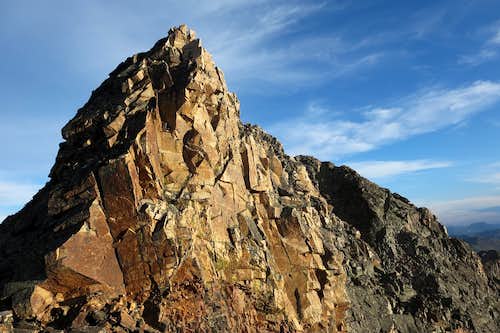 Class 5 Gendarme
I almost rapped down into that last notch. My 30m rope would have been enough, but the rap meant slinging a highly questionable rock as my sole anchor, and so I decided to trust my skills over the rock.
That was my third Class 5 section of the traverse, and the hardest. 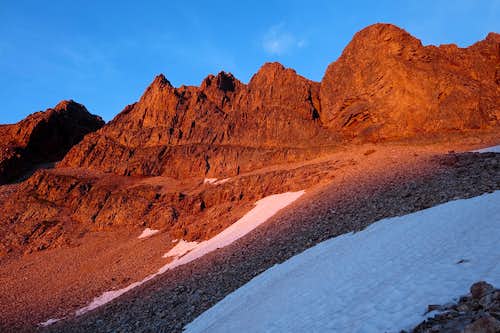 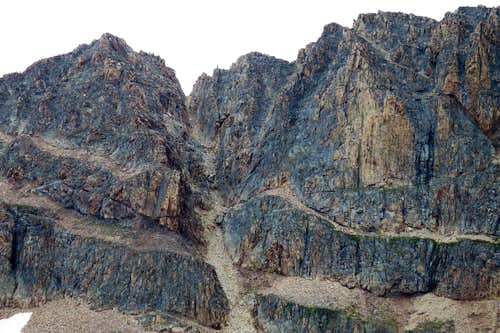 Descent Route
Note to anyone attempting the traverse: From that last notch I got into, it would have been hard getting back onto the ridge. And, coming back from climbing a different peak the next day, I saw that there was one last major notch south of Iceberg Peak. It looked to be the hardest of them all. 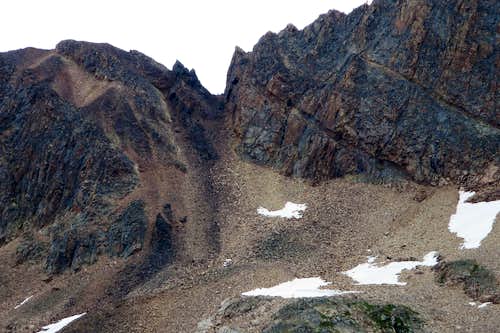 Iceberg-Zimmer Ridge
Someone has probably done the traverse. I'm pretty sure I would have had I had the time.
But the rock is really, really bad. Anchors are scary and so are the unroped options. Enjoy...

There are no fees or permits involved.

The alpine area around Goose Lake and the peaks is not prime grizzly territory, but all of Greater Yellowstone is bear country and most of it is grizzly country, so take the precautions that grizzly country dictates. Plus, the terrain around the access roads is prime grizzly habitat, and a fatal attack occurred at Soda Butte Campground in July 2010.

There aren't any campgrounds once you leave the paved road, but the Soda Butte and Colter sites are close. However, they are often closed because of bear activity or other reasons. Opportunities for dispersed camping along Goose Lake Road are legion. So are backpacking options in the basin.