Kitsuma Peak is a small summit on the Blue Ridge crest that punches well above its weight for trail quality, beautiful flora, and summit views. It can be a half-hour leg stretcher for travelers on I-40, an evening jaunt for conference-goers at Ridgecrest and Black Mountain, or part of a fine mountain bike circuit. The peak has a long tail, Youngs Ridge, where road noise is left behind and you can wander through some of the best mid-elevation forest in the area.

Kitsuma Peak stands astride the two eastern approaches to Swannanoa Gap, a key gateway in the Blue Ridge front that has channeled North Carolina's central transportation artery for more than a century. The mountain and its access trails are owned by Pisgah National Forest.

Ridgecrest Trailhead:  Ridgecrest Conference Center is just east of Black Mountain, N.C. on Interstate 40.  From the conference center, take Old Highway 70 1/4 mile east to a crossroads with Yates Avenue; continue straight across onto Royal Gorge Road and drive another quarter mile to the marked trailhead at the end of the road.
Old Fort Trailhead:  Two miles west of the town of Old Fort is the intersection of Old U.S. 70 (County Road 1400) and Mill Creek Road (County Road 1407).  The Old Fort Picnic Area is by this intersection, with a pretty entrance driveway paralleling Swannanoa Creek.  Drive in and park in this quiet and shady oasis, which has water fountains and widely scattered picnic tables.  The Kitsuma Peak/Youngs Ridge trail starts right behind the restrooms. Typical view of the Youngs Ridge Trail during laurel season
Kitsuma Peak is traversed by the four-mile Youngs Ridge Trail, which links the two trailheads listed above.
To get the full experience, climb the mountain from the Old Fort end.  This entails 1600 feet in net elevation gain (2000 feet in total climbing when ups and downs are factored in), and it takes a couple of hours.  Much of it is gentle or level walking along the top of Youngs Ridge, and the trail is never particularly steep.
For a much shorter hike to the summit, start at the Ridgecrest trailhead, from which it is just 500 vertical feet of steady, gentle switchbacks to the top.  The trail goes along noisy Interstate 40 for a few hundred yards before striking off into the woods.  The top is well under a mile from the trailhead.
The Youngs Ridge trail does not quite cross the summit, and although it offers one rocky viewpoint near its high point, you will miss out on the best views if you don't make the hundred-yard detour to the true summit.  There is an obvious, well-traveled loop trail that does this.  After getting on this loop, watch for a spot where the summit loop trail runs level on a north-south course, right by the summit knoll.  From here, a steep, downhill side trail takes you 20 yards to the impressive clifftop that makes this peak worthwhile.

The Youngs Ridge Trail has been completely reconstructed in recent years into a superb, not particularly technical mountain bike route. It has pretty good visibility and is still safe to hike despite the slight chance of encountering a bike. The work the mountain bikers have done has certainly produced a wonderful footway. But if you're up for biking it, consider making a loop trip, returning to the trailhead via Old US 70, which has been made into a car-free bike route. The map here gives an excellent overview of this loop. Go here for a detailed description.

Flame azalea
This is an excellent spring and fall hike.  It may be at its best in late May, when the mountain laurel is in peak bloom, and the occasional flame azalea spices up the forest floor as well.  Because of the low elevation, mid-summer can be hot and muggy, particularly at the Old Fort end.  Kitsuma Peak also works as a winter hike.  Snow is pretty rare.

There are no good campsites along the trail.  Camping is not allowed at Old Fort Picnic Area. 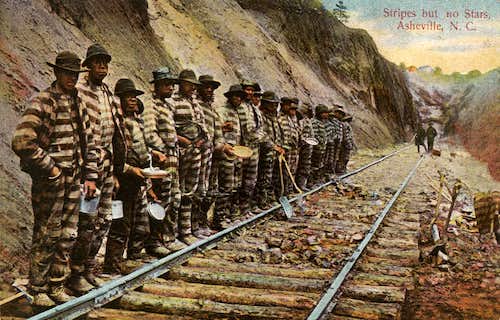 Building the railroad around Kitsuma Peak
The Blue Ridge front presented a steep 2000- to 5000-foot wall to early travelers and was a significant barrier to westward migration.  Swannanoa Gap was one of the few breaches in that wall.  The first cartway through the gap went on the south side of Kitsuma Peak and was in place by the late 1700s.  General Rutherford would have used this route when he brought 2400 pro-independence militia through Swannanoa Gap in 1776, early in the Revolutionary War, to destroy 36 Cherokee villages beyond.  By the time of the Civil War, however, the preferred route had shifted to Royal Gorge, on Kitsuma's north flank.
The great east-west rail line across the state was put through Swannanoa Gap in the 1870s, passing north of Kitsuma Peak.  The seven-tunnel, laborious ascent up Royal Gorge was built by mostly African-American convict labor.  In 1911, the North Carolina legislature commissioned a project to build the "Central Highway" across the state, and this likewise was routed on the north flank of Kitsuma Peak in the Mill Creek drainage.  It is the road that has become a paved bikeway today.

The most celebrated event on the flanks of Kitsuma Peak is a Civil War battle. In the last weeks of the war, a Union cavalry force of about 6000 under General Stoneman marauded through western Virginia and North Carolina, laying waste to Confederate supply lines. On April 19-20, 1865--before news of Lee's surrender had reached western North Carolina, and while the Confederate government was still at large--about 1,900 of Stoneman's raiders sought to reach Asheville through Swannanoa Gap. They were blocked in Royal Gorge, below Kitsuma Peak, by about 500-700 Confederates, who had managed to obstruct the Swannanoa Gap road sufficiently that the cavalry force could not easily get through. After some skirmishing, the raiders split, leaving one brigade at Swannanoa gap to pin down the Confederates while the other wheeled southward to try to breach the Blue Ridge at Howard's Gap two days later (not far from the present-day Asheville Airport). The demoralized Confederates could not mount much of a defense there, and Stoneman's men were ready to take Asheville when the war ended. The "Battle" of Swannanoa Gap is sometimes put forward as the last Confederate victory of the Civil War (a later skirmish at Palmito Ranch in Texas is said not to count, since it came after a cease fire was in place). In fact, though, the overall engagement around Asheville in late April of 1865 tilted in the Union's favor.