Martin Peak is the pile of red and orange colored schist (err...shit) immediately east of the much more famous Bonanza Peak. At 8,511 feet in elevation, it is one of the Bulger Top 100 peaks in WA, and is often climbed together with Bonanza from Holden Village. Martin has a reputation for being a very loose, grungy peak which many people will say they didn't enjoy climbing it. While the looseness of the rock can't be understated, solid rock can be found on the harder scrambling sections of the standard west ridge route. Martin is connected with Bonanza via the 6400 foot Holden Pass, which makes an excellent place to camp if climbing the pair of peaks. On the long summer days of June and July, a reasonably fit party can ascend both Martin and Bonanza in a day from camp at Holden Pass, and still have time to catch dinner in Holden. As a whole though, Martin Peak can certainly be enjoyed if you come with the right attitude, and have enough experience with loose rock, and how to best weight different hand and foot holds you will find. 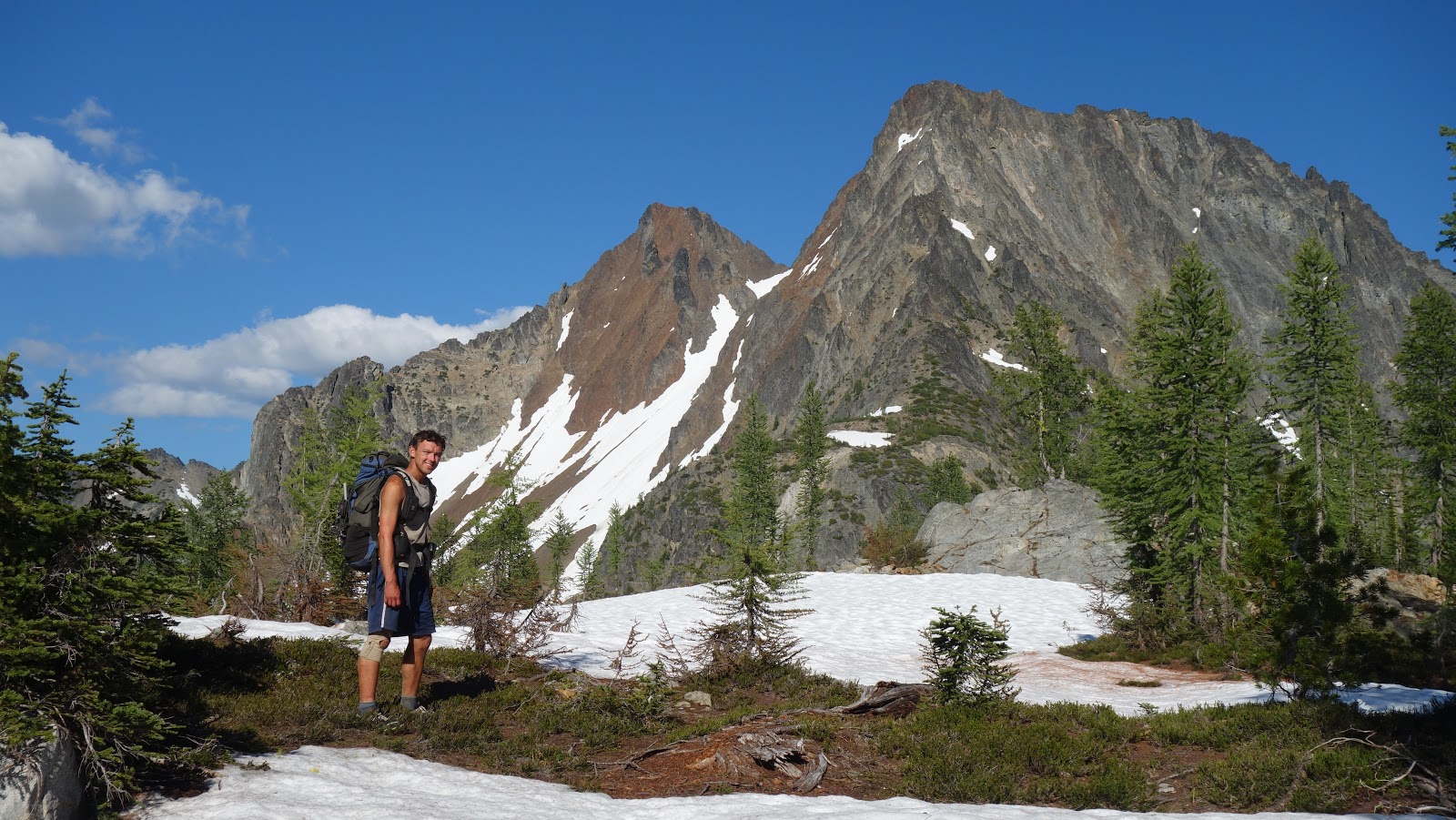 Perfect Afternoon at Holden Pass with Martin Peak behind

The most feasible way to get to Martin Peak is to take the Lady of the Lake ferry boat from Chelan to Lucerne. I have never needed to reserve a spot on either one of the boats on my weekday trips during summer, but if you are going on a busy summer weekend, it would be recommend. Sinply give them a call to reserve a spot (contact info found at bottom of the page). Although there are two boats (slow boat and fast boat) that both leave at 8am sharp from their private dock in Chelan, the fast boat typically doesn't stop in Lucerne going up-lake. Therefore you have to take the slow boat. It will take just over 2.5 hours to get to Lucerne where you will get off, and catch the shuttle bus up to Holden Village, which follows up the gravel road steeply along Railroad Creek. It is a good idea to Email the Holden registrar to let them know you are taking the bus, even if you don't plan to stay in the village. The cost for just the bus ride is $15 round trip. Usually climbers will take advantage of their meal service as well, which costs $8 per meal and is well worth it!

From the village, hike west to the far end and catch the Railroad Creek Trail for just under a mile to its junction with the Holden Lake Trail heading off to the right (northwest) at roughly 3,400 feet. The Railroad Creek Trail continues past Hart Lake and on to Cloudy Pass. Take the Holden Lake Trail for 2.75 miles until you reach Holden Lake at about 5,250 feet. The ascent up this trail is mostly gentle, and as of 2017, the fires from 2015-2016 have not yet destroyed this trail. From the lake it is 1100 feet additional gain to Holden Pass, where there are a few excellent camp spots. A well worn boot path continues to the path that should be easy to follow, despite reports from the past indicating a bad bushwhack. 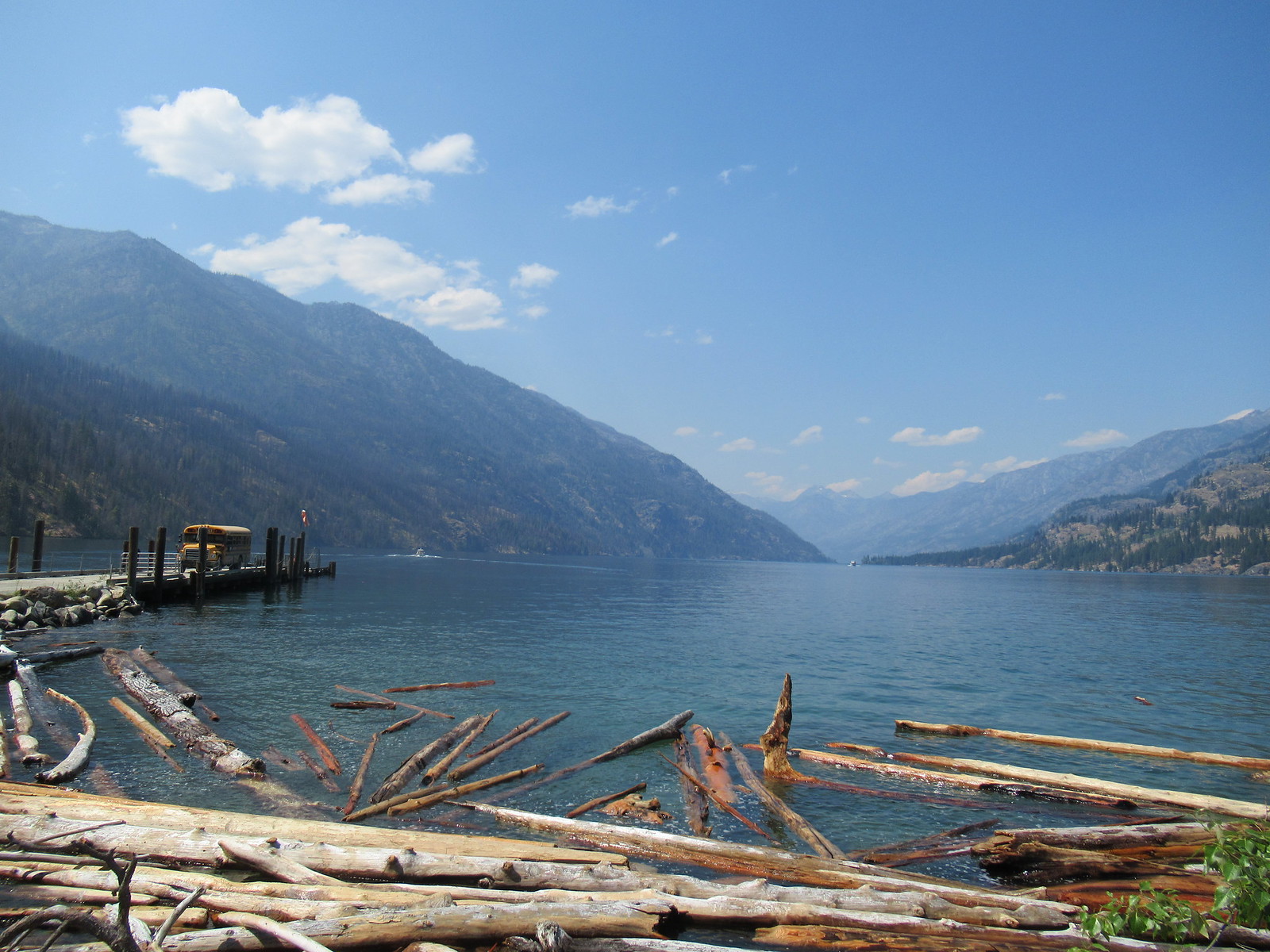 This is the standard route up Martin Peak, and the route that likely 95% of people who climb this peak will do. Since the peak has such crumbly rock, it will never be a destination for technical rock climbing, and new routes will seldom be done. From Holden Pass, hike east, up 400 feet and over two small hills along the long ridge connecting Bonanza and Martin (6840 and 6820 respectively), and descend back to 6660 feet at the small saddle at the base of Martin's West Ridge. Directly above, a large cliff blocks passage right on the ridge crest, so traverse right onto the south side of the ridge ascending horribly loose scree towards a deep gully. Climb this gully, and exit it up Class 3-4 rock on its right side just before the overhang at its top. From here (about 7100 feet), you can cut back left towards the crest and continue up easier class 2 terrain (scree) to the 7500 foot contour, where you'll traverse back right and south of the ridge again. The route for the final 1000 feet more or less connects gullies right to the south of the ridge more than it stays on the ridge crest. It is easy to see where people walk the most, and cairns mark the route. The first crux comes where the main gully turns into a brightly colored white slab, followed by an airy traverse on a small ledge. All the rock in this section is mostly solid however, making this class 4 section not too bad. More Class 2+ gullies continue above.

For the final 300 feet to the summit, you will come to a couple short, but nearly vertical steps about 6-8 feet high. They are 4th class, however slings are found just above them indicating people have definitely rappelled them on descent. Any competent scrambler can easily make it up and down without a rope however, and the consequence of a fall in this spot isn't so bad. Beyond this second crux, its a 150-200 foot Class 2-3 scramble to the summit utilizing more gullies. Be sure to wear a helmet, and don't climb above your partners while in these gullies, as they are filled with rubble.

If you find yourself approaching Martin Peak from the east via Company Creek Trail/Tenmile Creek Trail (aka Hilgard Pass), such as during a long link-up of many peaks in the area, there is a route up the NE face of Martin that requires considerable more skill on hideously loose rock and a good head for exposure. From Hilgard Pass, you can walk the ridge west towards the large basin on the east flank of Martin Peak and Martin Ridge. There is a small glacier here, but before mid-July, it is unlikely you will see any exposed blue ice. Ascend easy snow or talus slopes to a point just before the 8000 foot saddle on the north ridge of Martin Peak. It would be smart to ascend this basin when covered in snow because the talus is horrid. From the notch, look up at Martin Peak, and locate the large cliff guarding the summit on its north face. You will need to traverse around this cliff on its left side, utilizing a series of downsloping ledges on the NE face. From the 8000 foot saddle, traverse left below a large gendarme (do not cross to the west side!), and ascend/traverse across the snow finger (or in later season hideous gully) extending up towards the big cliff above. You are trying to get to the east rib off to the left, which provides a class 4 route around the left side of the cliff. Be very careful with large boulders awaiting your hands and feet as they will tumble down the mountain at the slightest touch. Don't climb above your partners, and climb one at a time if needed.

Once you cross over the east rib, you can ascent it just on the left side up blocky ledges (still very steep with deathly exposure) directly to the summit. Higher up, on the final 150 feet the rock quality increases slightly. Note that it is only 500 feet from the 8000 foot saddle to the summit, but it will take any party who isn't a solo climber at least an hour since most of the time you are trying not to knock rocks on one another.

Also note that the fires from 2015 completely destroyed the Tenmile Creek and Company Creek trails up until you reach the meadows below Hilgard Pass at 5500 feet. Numerous downfall must be navigated, as well as a plethora of dusty walking without any semblance of a trail once you pass Tenmile Falls just a mile from Holden. The switch-backing trail from the 5500 foot meadow to Hilgard Pass can be followed, although it's quite narrow. It does however make the ascent to the pass much better if carrying a pack. Without much weight to carry, heading up the scree slopes to the west from the meadow will be steeper, and looser but will cut some distance. 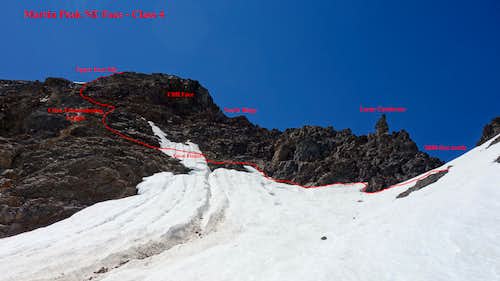 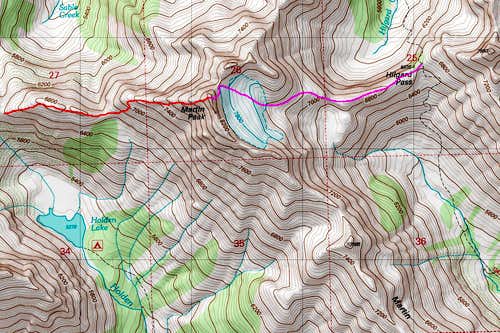 April-October would be the best months, with more spring snow in April and May, and more fresh fall snow from mid September onward. Winter ascents are rare, but have been done. The ferry service, and Holden Village do operate during the winter, so approaching up to Holden Pass is certainly a feasible task. Just be very aware of avalanche conditions.

No red tape in the Glacier Peak Wilderness. Try to leave no trace (even though that's not actually possible), camp on previously used surfaces, rock, dirt or snow, minimizing impact to undisturbed grasses/flowers. Pack out everything, don't build fires etc. etc. Good camping can be found at Hilgard Pass, the 5500 meadow below it, Holden Pass, Holden Lake, or somewhere in the burned forest along Tenmile Creek. 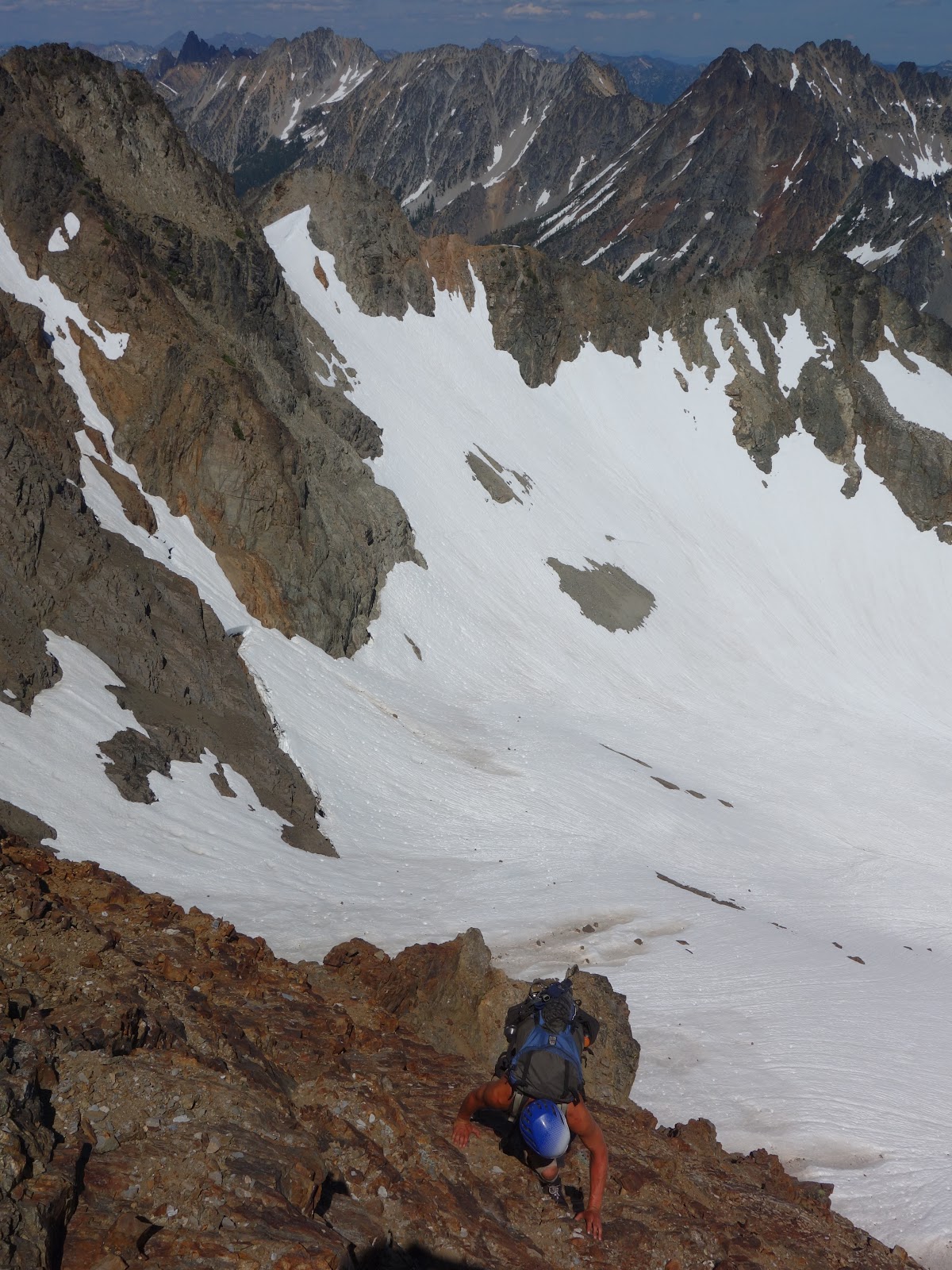 My TR of an 11 Bulger Peak link up in the GPW, where we ascended the NE face and descended the west ridge