Sopwith Camel Mountain which is named after a World War 1 British airplane is located south of the famed Stevens Pass. Why it is named that I don't know. The peak itself is ranked #89 on the Wenatchee "Back Court" Mountain List. Though it is on this list and it is located near a popular resort area Sopwith Camel sees very little traffic except for rogue backcountry skiers and peakbaggers. Sopwith Camel has both a western (false summit) and an eastern (true summit). Both summits are forested but and decent views off in different directions. If you are up on the ridge of the mountain it is advisable to do both. 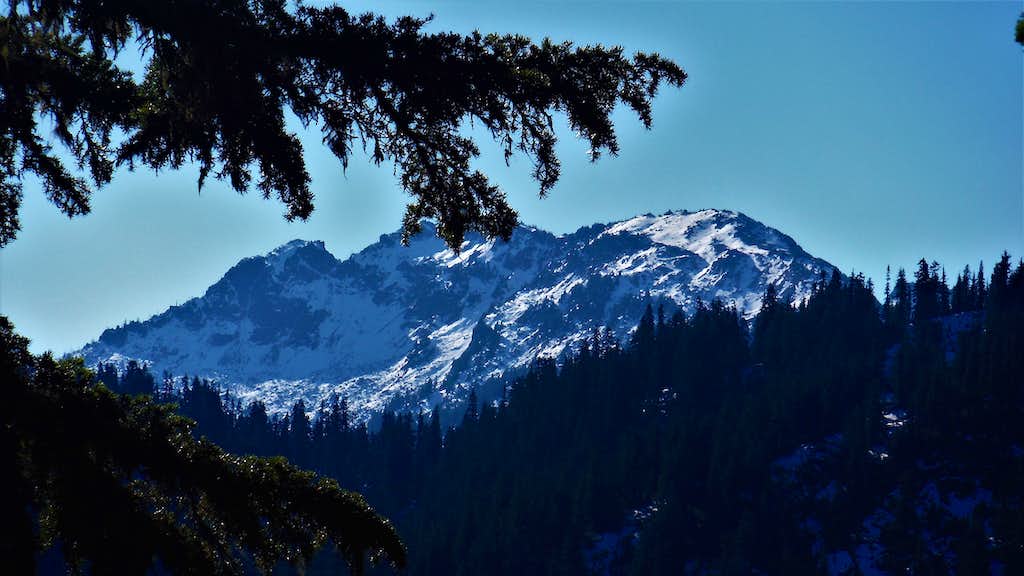 Thor Mountain from Sopwith Camel Mountain (10/31/17)
The peak is most commonly summited from the Tunnel Trail located right off of Route 2. This trailhead does close in winter when the road becomes icy and eventually blocked by snowplows. In winter this summit can be reached from the north from the Stevens Pass Ski Area and this peak does receive some traffic from backcountry skiers. The views on this mostly forested views are hit and miss and often overshadowed from views on neighboring peaks such as K9 and Cowboy Mountain. The views are though worthwhile especially if one is coming up from the steeper and scrambly eastern side. One of the ledge on the eastern side does offer an excellent view to the south towards Thor, Thunder and K9 summits. Problem is most people do not come up from the eastern side but come of from the south. Coming up this way is mostly forested and the views on the southern route are at best extremely limited.

Sopwith Camel is commonly summited with a combination of summits. I would have done this except my shoelaces crapped out. It is worthwhile to do as a solo summit and at 7 mile and 2000 feet it makes a good half day trip.

FROM SKYKOMISH ON US ROUTE 2:  Head east from Skykomish for roughly 12 miles. Right at the sharp left turn after a bridge (over Tunnel Creek), make a  right on FS 6095  which can only be done eastbound. Stay on road for 1.2 miles. Veer left onto and at 1.3 miles you'll arrive at the Tunnel Creek trailhead. 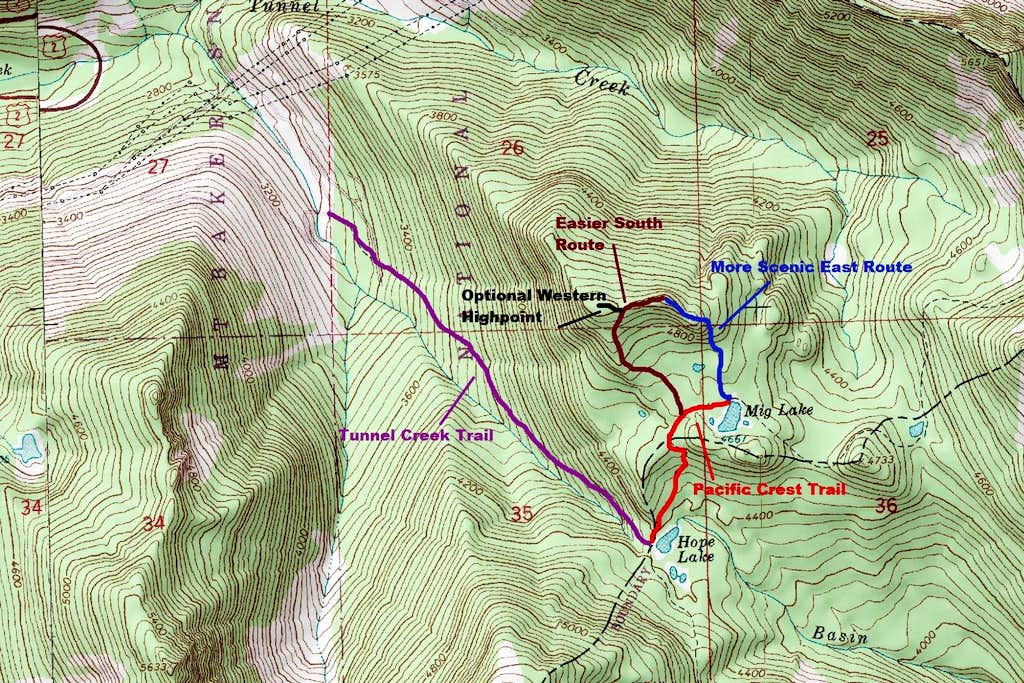 Map of the routes up Sopwith Camel
The route listed below is from the Tunnel Creek Trail off of Route 2. Head up the moderately steep Tunnel Trail up to Hope Lake. There has been a lot of work done to this trail back in 2016 and I suspect there may be more coming in the future. The trail heads up rough 1400 feet in 1.5 miles and crosses a number of waterfall while heading all of the way up to Lake Hope at the elevation of 4400 feet. From there one must take a left onto the Pacific Crest Trail and take it at its gentle grade all the way to general area of Mig Lake 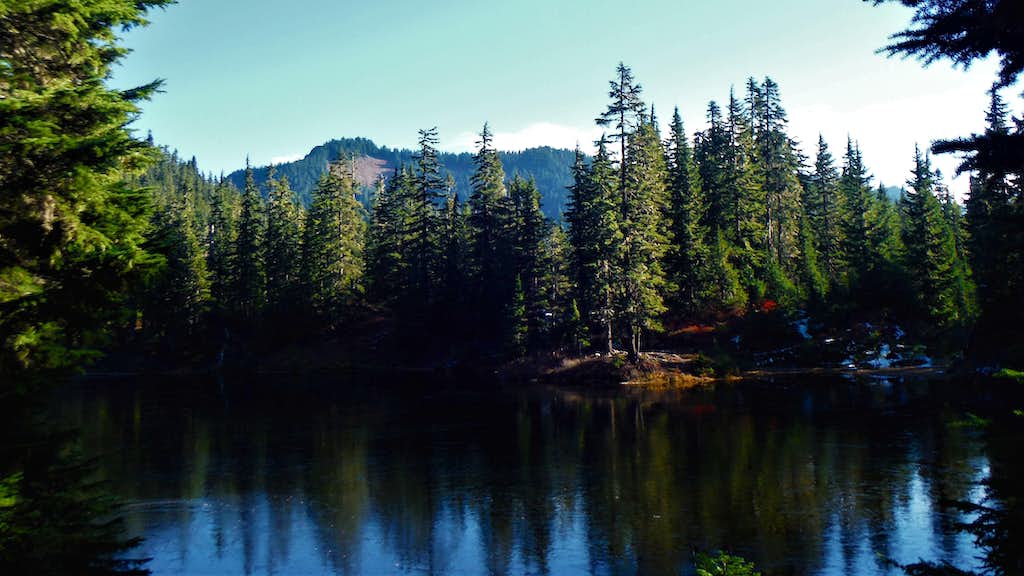 Lake Hope
Here is where thing become a little interesting. If you want the easiest general route than take the south route. This route is not very scenic but the bushwhack is not bad and there is not much in the way of scrambling. You will want to do this before you reach Mig Lake. If you just want to bag the peak this is the way to go.
Thankfully this is not the way we went up. We went all the way to Mig Lake and left the trail past where the toilets are. From there the bushwhacking is steeper and the vegetation is thick until you get close to the ridge. From there you want find the obvious ramp which leads right up to a false summit which features an excellent view to the south. From there head down the false summit and then 2nd class forest scramble and bushwhack up the true summit. There is another ledge which features an optional 3rd class route that features more good views to the south. Take that all the way to summit. This second route is a little more work but a lot more payoff. 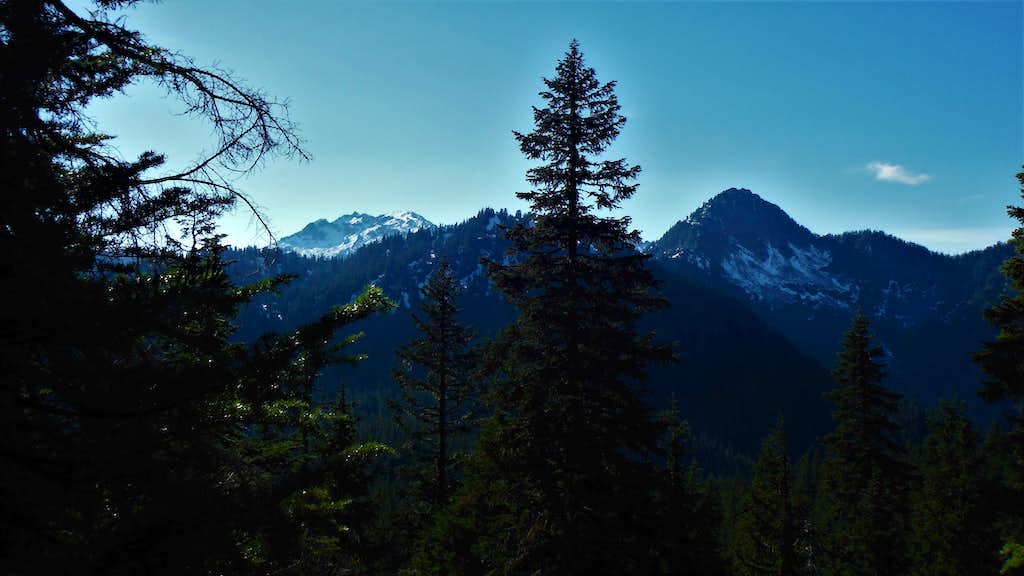 Thor, Hydrant and K9 as viewed from a false summit on the eastern route

The trailhead from the Tunnel Trail has no red tape. Come here and park as you wish. A Northwest Forest Pass is required to park up by the Stevens Pass trailhead. 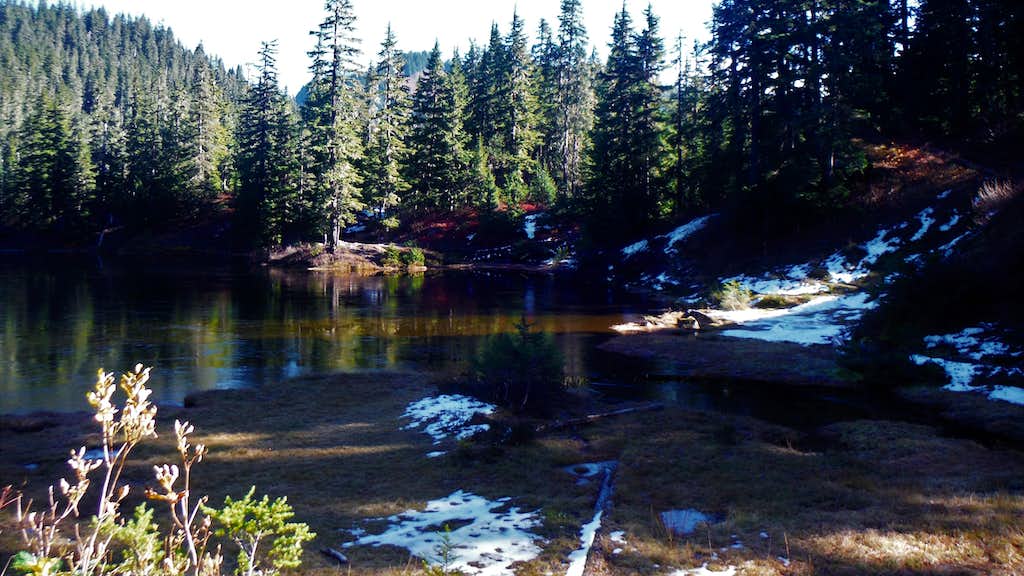 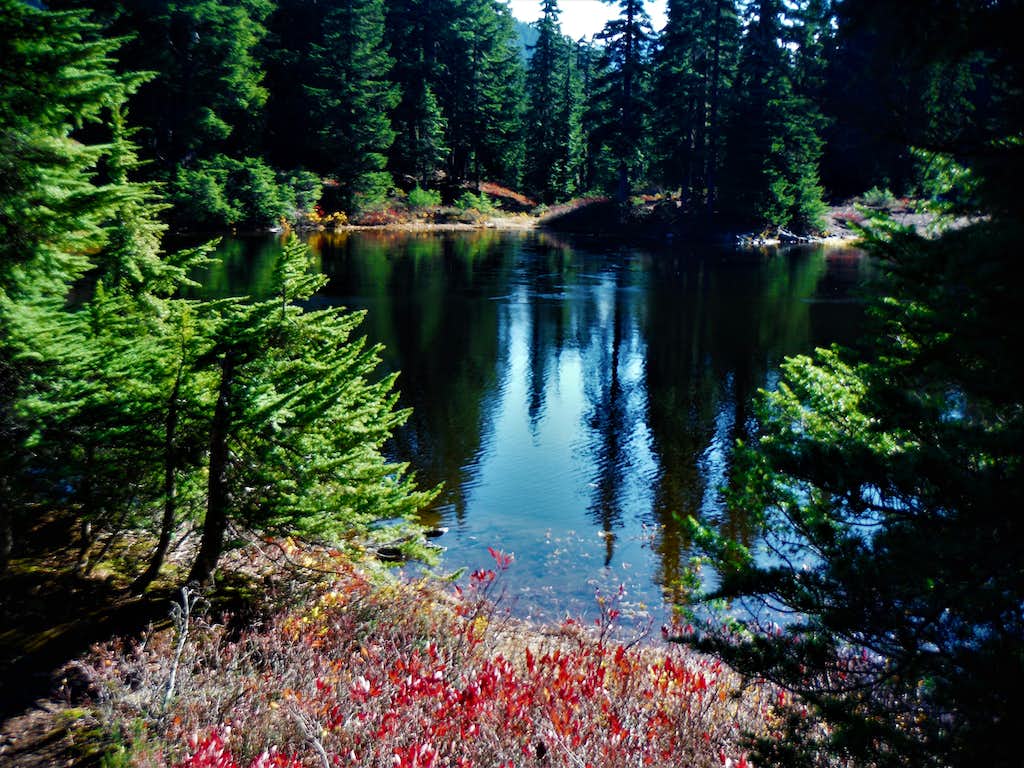 Mig Lake is a great camping spot
Nearby Mig Lake is located with excellent camping spots. There is even a toilet area near the camping area. Make sure not to produce any open flames within a half mile of the lakes. As for camping on the summit it is best to say that this summit should only be saved for bivys. I saw really good camping on the summit.