Panorama from the ridge below the summit

It is just two miles northwest of Piestewa Peak and two miles southeast of North Mountain. It can even be reached from either of those trailheads, or combined with those peaks, if one was so inclined.The primary trailhead for Stoney Mountain is probably Dreamy Draw, on the west side of Piestewa Peak. From here you can access Stoney Mountain as well as Veterans Mountain (aka Peak 1922), which are both accessed from Trail 100 (although Peak 1922 does not have a trail to the summit). There is also parking in the neighborhoods, which provide easier access to Peak 1845 to the south or Peak 1871 to the north. Stoney Mountain requires some scrambling, but overall, it isn’t too difficult. It is best hiked between November and March; although it isn’t inconceivable to hike here in the morning any time of year.

Getting There and Route Options

The main starting point is the tunnel under Highway 51, which is accessed from Dreamy Draw. Take Highway 51 to Northern Avenue and take a left. It leads right to the trailhead. At the back parking lot, you will be hiking to the tunnel, which is Trail 100. The address is 2421 E. Northern Ave.

From Dreamy Draw, continue on Trail 100 for about half a mile past the tunnel. From there, Stoney Mountain opens up ahead of you. You can do the loop. Take a right at a trail junction and continue for 200 yards. There’s a trail on the left heading up to Stoney Mountain. Take that up, but then continue down a trail on the other side and then back to the junction. It is about a 1 ½ mile loop. That makes it about 2 ½ miles total round trip gaining about 750 feet. 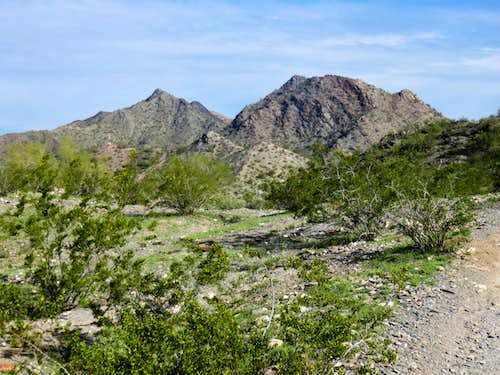 Stoney Mountain (left) and Peak 1922 (right) from trail south of Dreamy Draw
The shortest route to Stoney Mountain is off of 24th Street and Shea.  Just south of the intersection, you can park at an entrance point to the mountains. Hike up and over a hillside to Trail 100 and the trail to Stoney Mountain is right across Trail 100.  The summit is only about 0.6 miles and 570' of elevation gain.  You can also park at Christy Cove Park. Walk through neighborhoods on Christy Drive until you head into the trail system.  Go south on Trail 100.  You'll reach the summit in 1 1/2 miles gaining about 590' in elevation gain.
There are other options. One option are the parking lots north of Cactus on Cave Creek Road. From here, Stoney Mountain is about 2 miles away and you can summit Peak 1871 en route. Another option is to park near the start of the trail to Peak 1845. To do this, you need to reach the junction of E. Mission Lane and 16th Street. The easiest way to do that from the south is to take 12th Street North from Northern Avenue, to Dunlap, then take 14th Street North to Mission Lane. The trail entrance is at the south end of 16th Street. From the north take Cave Creek Road South to 13th, head east on Mountain View, and then south on 16th Street. You can take 16th Street north for a half mile from Mission Lane or 0.2 miles north from Mountain View, and park the street. Another access trail starts there, north of Cinnabar Avenue.

There is no red tape in particular. If parking in the neighborhoods, just be mindful of where you park. Dreamy Draw is open from 5am to 7pm (extended to 9pm from June 1 through September 30th).