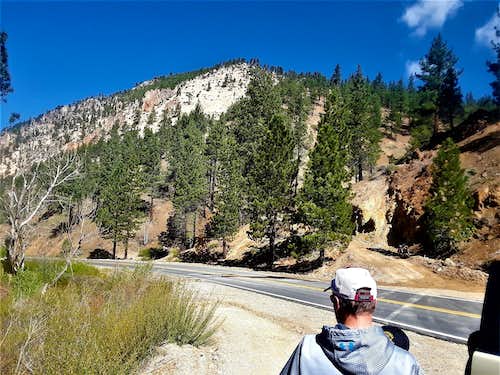 Colorado Hill from the parking area

Colorado Hill is an often-overlooked summit located near the town of Markleeville, California. The mountain has a history of mining activity going back to the 1860s and as such there are a maze of roads along its slopes. A trailer remains on its south side at an elevation of about 6,720’. This is likely from more recent mining activity (within the past 30 to 40 years). However, there does not appear to be any active mining activity on the mountain today; and certainly nothing restricts access to the mountain. Colorado Hill has over 600’ of prominence, although it is really just a much lower mountain among a series of much higher terrain. Monitor Pass, 5 miles to the east, is 840’ higher than Colorado Hill. Ultimately, what is attractive about Colorado Hill is its distinctiveness. It’s a colorful, rocky peak that stands out among nearby mountains. Because it is below 7,500’, it is accessible most of the year. Access to the main road up the peak is not closed in winter.

There are several routes up the mountain from one primary starting point. The summit can be reached in less than an hour from either of them. Colorado Hill is best hiked between late March-June and September-early November. It is recommended to leave this area alone in the heart of summer. It has a mild desert climate and it can get pretty hot.

From the Reno/Carson City area go south to Minden on 395 and take Highway 88 from Minden and go south to Woodfords, where you can take Highway 89 to Markleeville, California. About 4 miles past Markleeville is the junction of Highway 89 and Highway 4. Take Highway 89 up towards Monitor Pass. The entrance road to Colorado Hill is less than 2 miles up on the left after you pass underneath the distinctive light-colored parts of Colorado Hill. Parking is across the road on the right. This is not an official trailhead, but there is ample parking. The road up Colorado Hill is about 28 miles from the Highway 88 turnoff in Minden.

There are a couple of loop options for Colorado Hill. It is recommended to use either of the first two options to ascend Colorado Hill and take the longer, more gradual option down. The shortest route starts 300 yards from the highway. This route is sometimes hard to follow, but leads up to an abandoned trailer almost half way up. From here, overgrown mining roads switchback up towards the summit. Some of the roads end and begin again, which requires some minor off-trail hiking to ascend back up. It isn’t that hard to follow. The summit is reached in less than 2 miles, gaining over 1,300’. If wanting something less stressful, instead hike about 6/10ths of a mile up the road from the highway and take a left. This road switchbacks up for two-thirds of a mile and reaches the mined area just below the summit. It is another half mile or so to the summit from here. The summit is reached in less than 2 miles, gaining over 1,300’. For the more gradual route, at the east edge of the summit area, there is a decent road heading north. Take that road down to the main dirt road. Via this route, it is less than 2 ½ miles back to the parking area. There are additional roads further north to explore if wanting to add additional mileage. 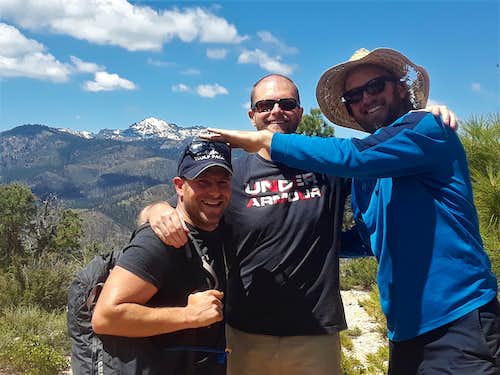 The boys on the summit

Colorado Hill is located within the Toiyabe National Forest. There is no red tape in particular. The parking area is below the gate that is closed in winter, so the mountain is open year round.