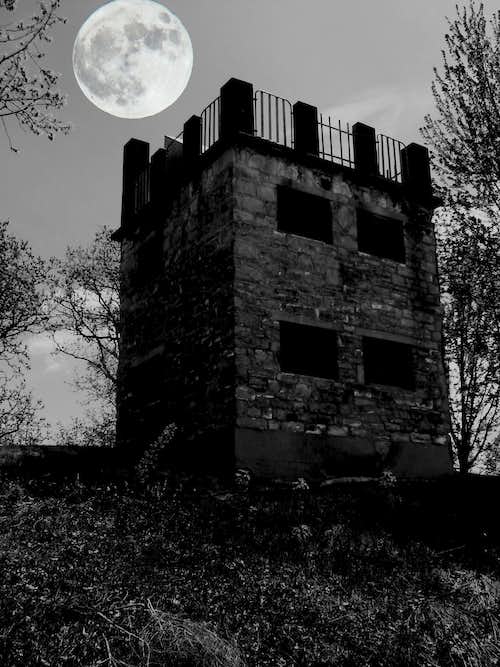 A haunted castle atop a small peak in Wisconsin?

Well…not really, but the myth has fueled some interesting claims over the years.  The only peaks in Wisconsin to boast any kind of castle at the summit are limited to just two.  The first is Holy Hill, 37 miles northwest of Milwaukee. An elaborate and beautiful castle-style basilica stands at the summit.  The second castle is a very simple structure, perhaps more like a small castle tower.  It is located atop Elk Mound, one of the highest points in Dunn County, and is next to the village that bears its name. The Elk Mound Castle offers visitors a great view from the observation deck atop the 3-story structure, plus a place to picnic when the weather allows.  The flag pole at the summit is visible from many miles away. 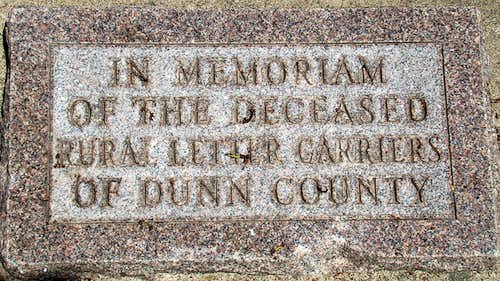 The story about the naming of the mound is that early explorers noted an elk herd that roamed the mound area, leading to a name for the 1,220-foot peak that dominates the landscape for many miles around.  The mound is also believed to have been a lookout place for both the Sioux and Chippewa tribes.  Furthermore, it is reported that the Chippewa and Black Hawk tribes met there for a war council centuries ago.

After the area was settled by Europeans, the mound and the land around it were privately owned.  All that changed in 1933, when the land was donated for a park by Louis and Marie Nelson.  In 1937, county and WPA workers joined forces to construct a castle-like structure at the summit, which was then dedicated in 1938 to the memory of deceased postal workers (possibly the only place in the USA with anything like that). 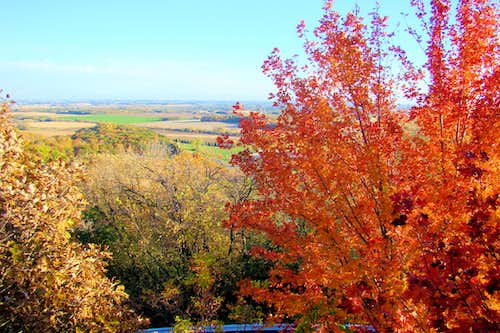 Elk Mound Park was given to the village of Elk Mound, who were forced to close it almost 50 years later in 1987 because of liability issues stemming from vandalism and deterioration.  So, Elk Mound High School students took on the task of improving the castle and the park around it as part of their long-term community service project.  They completed their task six years later.  Then, after a newly-paved road, complete with guardrails was completed, a re-opening ceremony was held in 1994.   Other improvements came in 2002 with a new flagpole and again in 2003 with electric lighting.  Somewhere along the way, a rumor developed locally during the time period Elk Mound was closed that the castle was haunted.  Though scoffed at by most people, the tale has persisted with some fanciful stories keeping the claim alive.

The mound is geologically a kame – an irregular shaped hill formed from sand, gravel and other sediment during the last major glacial period in the region.  Unlike some of the monadnocks and nunataks to the south, Elk Mound is almost devoid of rock outcroppings.  The peak is almost totally covered by dense forest.  Were it not for the castle at the summit, there would be no view of the region around it.  Some of the tree types seen on the mound include birch, maple, pine, oak, hickory, ash and aspen. Most of the wildlife seen on the mound consists of deer, fox, raccoons, skunks and wild turkeys.  Black bears and wolves are rarely seen in this area, though the Wisconsin DNR lists this as an area where black bears are common

Most of the visitors to Elk Mound arrive on Highway 12.  If you are traveling from the west on Interstate 94, you will find that about 3 miles west of Elk Mound there is an intersection with the Highway 29 / Highway 12 freeway (Exit 52).  If you turn onto Highways 29 / 12, in about one mile, you will arrive at a turnoff (Exit 61) where Highway 12 branches away from Highway 29.  Follow Highway 12 into the village of Elk Mound. 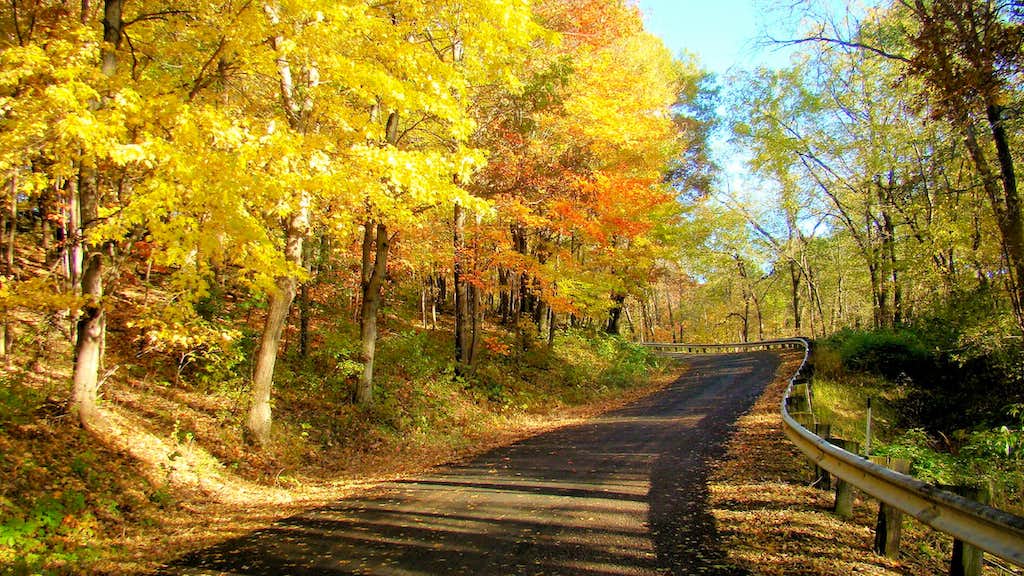 Once you arrive in the village of Elk Mound, you will need to watch for the intersection with Holly Avenue, which is also County Road H.  Travel north on Holly for about .6-mile, where you will come to a small park on the right and Elk Mound Road on the north side of the little park.  Assuming you plan to hike to the summit, you may park anywhere there is space in the small park. 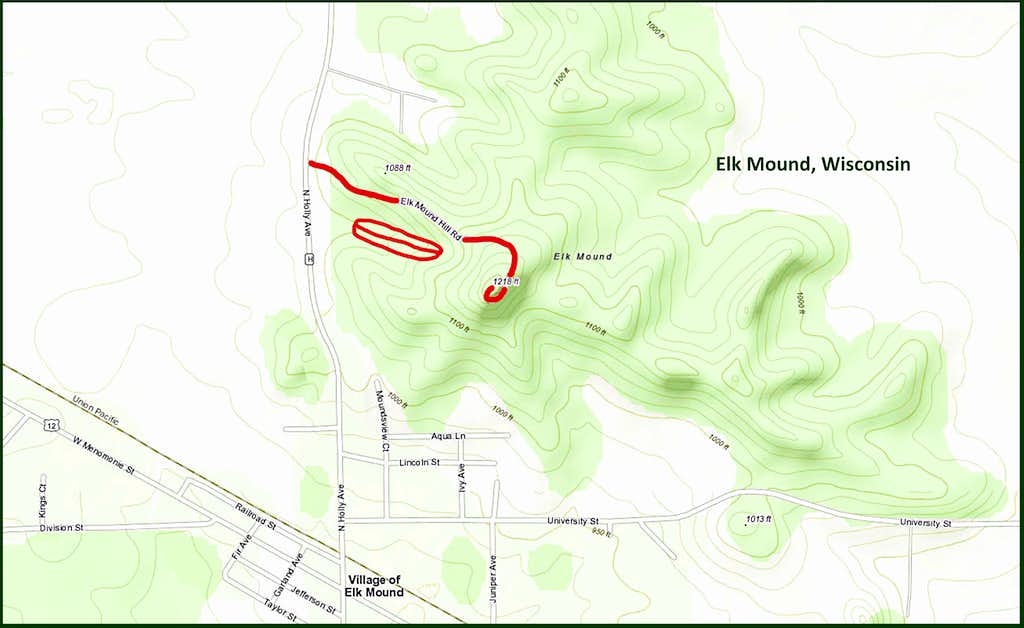 The Elk Mound Park Road is open from May 1 to Oct. 31.  During that period, if you don’t mind sharing the road with an occasional slow-moving car, you can also hike the ½ mile route up.  The other half of the year, only foot traffic can use the road to the summit.  There is a park with picnic tables and a fair-sized parking lot next the start of the road to the summit.

At the back of the parking lot, there is sort of a “Figure 8” trail that can be hiked in its entirety in about ten minutes.  From the uppermost part of that trail, a hiker-climber can bushwhack up the side of the mound to the summit.  Or, they could bushwhack from anywhere along the road through park land to the summit.  Please watch out for a few small private property areas adjacent to the park land.  The map above shows the hiking possibilities on Elk Mound. 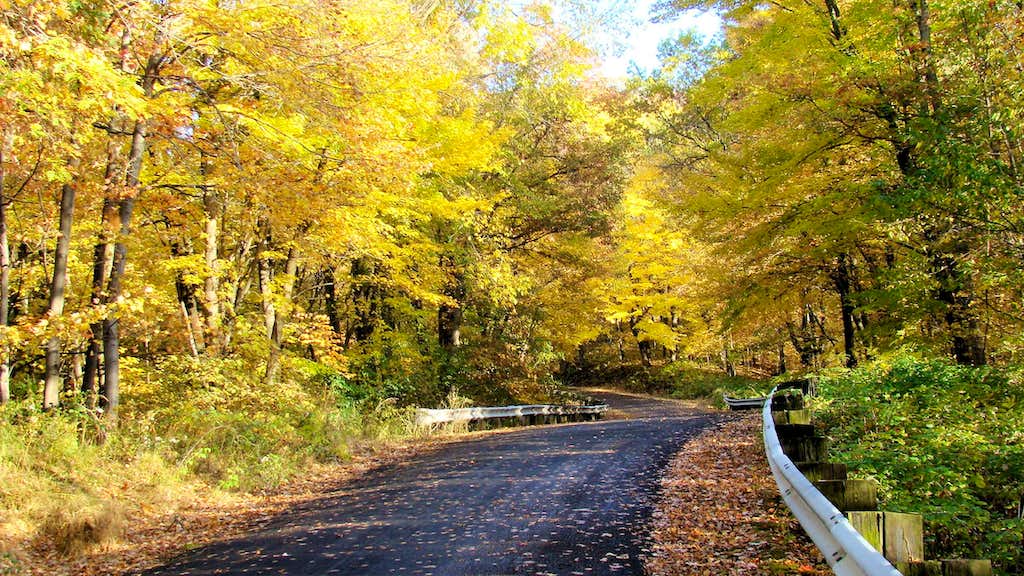 As long as you comply with the short list of posted regulations, there is no problem.  The park opens at 8 AM and closes at 10 PM, so there is no camping in the park.  This is also not a place to discharge firearms.  No permits or fees are needed to hike or picnic, but vehicles are not allowed on the summit road from November 1 to April 30.  Pack out what you bring in, especially during late fall to early spring, because trash cans are not emptied then. 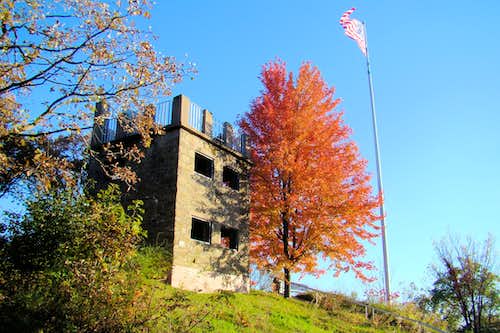 Since the road to the summit closes on October 31, there is no winter maintenance on Elk Mound.  The winter of 2018-2019 registered eight feet of snowfall here, making hikes to the summit virtually impossible.  Summer lightning or hail storms are also not the best times to be on the mound.  Not every acre in the area around the mound is off-limits to hunting seasons, so be aware of those risks.   Links that may be helpful to your planning include these: 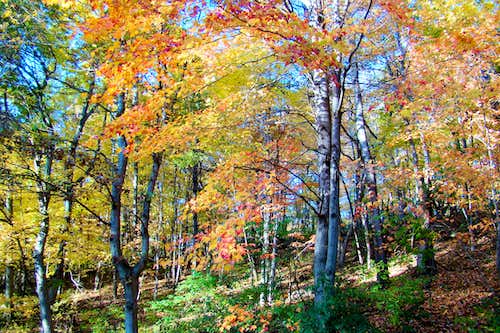 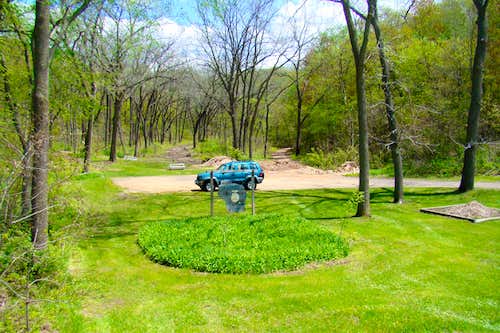 The best areas are at state campgrounds not too far from Elk Mound. 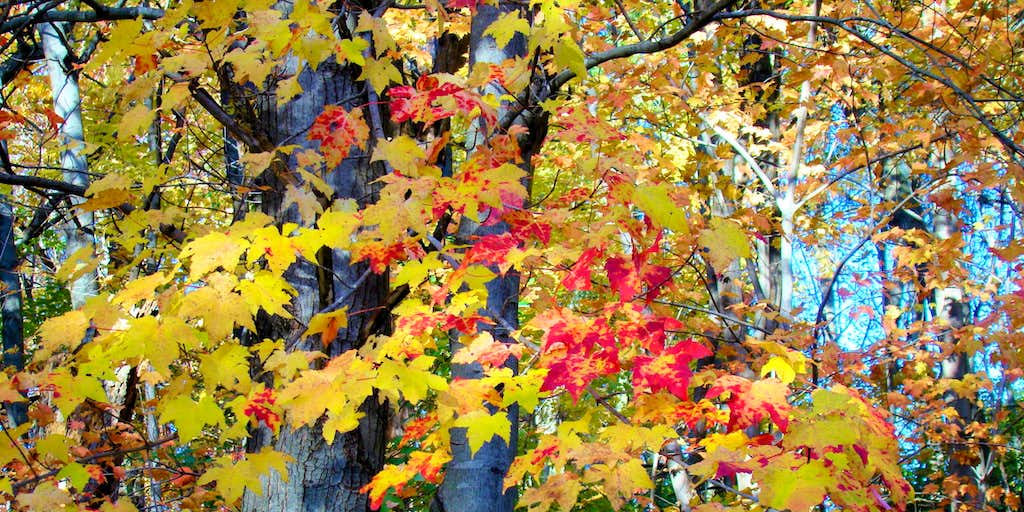