Mt Lincoln is the 8th highest mountain in Colorado and is the county high point for Park County. It is usually climbed after Mt Democrat and before Mt Bross as many climbers like to bag all three the same day. Any of the 3 mountains are pretty easy on their own... but doing all three in a day does require some effort. This was the funnest of the three with a nice little knife like ridge leading out to the summit. From the Democrat/ Cameron saddle it is a Class 2 hike right up the west ridge. There is some exposure, but little danger. Somewhere along the line I remember that this mountain was named for President Lincoln to get back at the Democrats for naming the sister mountain Mount Democrat... just a little trivia.

As of June 2005, certain landowners had blocked access to Democrat, Lincoln, Cameron and Bross because of private property and liability issues. However, according to an Associated Press article dated August 8, 2006, the town of Alma recently leased the land for these 14ers for a total of $1 a month and plans to open the trails sometime next year. The town enjoys governmental immunity in lawsuits, which limits how much it could be sued for. Great news! 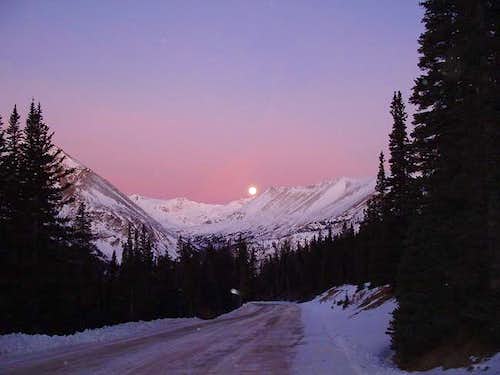 From Denver take I-70 west to exit 203, take Highway 9 south through Breckenridge to the town of Alma. Another route is Hwy 285 from Denver to Fairplay, then North 8 miles on Hwy 9 to Alma. Right across from a general store type building (Placer Trading Company) in the center of Alma head west up Buckskin Creek Road. You will know you are on the right road if you see the creek to your left. If you want to gain at least 3000 feet on the climb drive up the road about 4 miles and park at one of the turnouts. Its still a couple miles to the Kite Lake trail head at about 12,000 feet. You can drive a car most of the way, but there are a couple creeks crossing the road, and I would recommend scouting them before trying to cross them. A 4WD and good clearance can come in handy here. Once past the creeks its a short drive up the road to parking at Kite Lake. Parking is $3 in the summer. Most people start the climb from Kite Lake. Starting at Kite Lake and doing Democrat, Lincoln and Bross and return is about 5.4 miles with3450 ft elevation gain. An alternate route is the Hoosier Pass Approach and can be reached by heading north 2 miles from Alma. There a small poorly marked dirt road named Roberts Lane heads off to the left (west) and switchbacks eventually running into Mt Lincon Road. Check your topo to see where you want to park as the road leads quite a bit up to the summit of Lincoln. Road end to Lincoln, Democrat, Bross and return is 8.5 miles and 4800 ft gain.

Camping is very popular at Kite Lake and readily available. You can park your car right there at the lake and pitch your tent beside your car if you are so inclined, or trek uptrail a little to get away from the crowds. Parking as of July 2003 is $3 and camping is $7. There is ample parking and many fire pits.

The trail starts out quite wide and the slope gradual for about a mile until the climb to the Democrat/ Cameron saddle begins in earnest. There is some scree to the saddle, but mostly well marked trails. If you have climbed Mt Democrat first, return to the saddle then climb up the other side past Mt Cameron to the Lincoln summit. If you are only climbing Mt Lincoln proceed from Kite Lake to the saddle mentioned before and climb up the right ridge. The trail is well marked. There is some exposure and usually some snow around Mt Cameron, but nothing major or particularly dangerous. Mt Cameron is also over 14,000 but there is not enough vertical change from Mt Lincoln that it is normally not considered an "official" 14er. Latest weather and avalanche conditions can be heard on tape from CAIC at 303-275-5360.

Conditions on this mountain, like all Colorado 14ers, are subject to change rapidly- especially during the prime climbing summer season. The mountains are their own weather system, and weather forecasts from nearby towns often have little to do with actual mountain conditions. You can generally count on clear to partly cloudy in the morning, and heavy clouds and thunderstorms in the afternoon during the summer.

There is no substitute for getting an early start, and getting as much of the mountain "behind you" as early in the day as possible. Keep a good eye on the sky as weather conditions can deteriorate rapidly. The greatest weather danger is from lightning strikes, and climbers are killed almost every summer in Colorado by lightning strikes. July seems to be the most deadly month for lightning.

Two climbers were killed by lightning in Colorado within a couple days of each other in the summer of 2003. I think the following important information from Gerry Roach's book "Colorado's Fourteeners From Hikes to Climbs" bears repeating. Added here with permission from Gerry Roach:

Colorado is famous for apocalyptic lightning storms that threaten not just your life, but your soul as well. This section will have special meaning if you have ever been trapped by a storm that endures for more than an hour and leaves no gap between one peal of thunder and the next. The term simultaneous flash-boom has a very personal meaning for many Colorado Climbers

1. Start early! Be off summits by noon and back in the valley by early afternoon.
2. Observe thunderhead buildup carefully, noting speed and direction; towering thunderheads with black bottoms are bad.
3. When lightning begins nearby, count the seconds between flash and thunder, then divide by 5 to calculate the distance to the flash in miles. Repeat to determine if lightning is approaching.
4. Try to determine if the lightning activity is cloud-to-cloud or ground strikes.
5. Get off summits and ridges.

1. You cannot outrun a storm; physics wins.
2. When caught, seek a safe zone in the 45-degree cone around an object 5 to 10 times your height.
3. Be aware of ground currents; the current from a ground strike disperses along the ground or cliff, especially in wet cracks.
4. Wet ropes are good conductors.
5. Snow is not a good conductor.
6. Separate yourself from metal objects.
7. Avoid sheltering in spark gaps under boulders and trees.
8. Disperse the group. Survivors can revive one who is hit.
9. Crouch on boot soles, ideally on dry, insulating material such as moss or grass. Dirt is better than rock. Avoid water.


The following link is also helpful: Lightning Safety and Crouch

Also see this report by nchenkin It will make you really think about lightning safety: Struck By Lightning!

Summer is most popular and most crowded. June to August is peak season. An easy drive from Denver makes this a popular mountain, especially on weekends. Try to climb during the weekdays if possible. As always, start early, especially since climbing Lincoln along with Democrat and Bross can make for a long day. Thunderstorms abound it the afternoons in Colorado, so be prepared for weather in the summer. ATTENTION WINTER CLIMBERS: I received an email from Scott Farish about an accident he experienced on neighboring Mt. Democrat in October 2002. Please read the account WINTER ACCIDENT ON MOUNT DEMOCRAT

Post your hero summit shots and other pics of people having fun or suffering on Mt Lincoln here.

Leave No Trace
Check out the web site of LNT and learn some important minimum impact hiking tips.

Colorado Mountain Club
CMC’s web site will tell you all you need to know about Colorado’s largest and oldest hiking club.

I hiked up Mount Democrat in August 2016. (Wanted to do the Decalibron, but I got a late start.) The road is open all the way to the trail head and the Kite Lake campground. You'll need a vehicle with high clearance (not necessarily 4WD) to get all the way to the trail head. Sedans and other low clearance vehicles were parking about two miles down below a deteriorated section of road. There's a self-pay box at the trail head. $3 for day use; $12 for overnight camping. Trail to Democrat was well-marked and in good shape. Trail to Lincoln appeared to be in similar condition. Next time!

you must stay on trail from Lake Kite

https://coloradosun.com/2021/04/30/colorado-fourteeners-14ers-closure-lincoln-democrat-bross/ "Landowners who own the tops of Colorado’s Mount Lincoln, Mount Democrat and Mount Bross on Thursday closed access to the trio of Mosquito Range fourteeners. The closure triggered an upswell of lamentations from Colorado’s peak-bagging community. But the closure is expected to last only this month. "