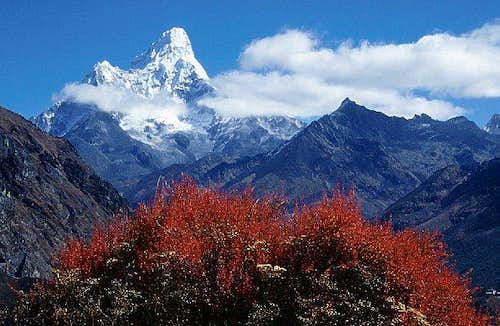 Ama Dablam is known as one of the most impressive mountains in the world, not for it's altitude, but for it's beauty, aesthetics and the pure exposure encountered high on it's flanks. Most parties attempt the SW ridge, climbing expedition style, fixing ropes, ferrying loads, and acclimatizing slowly. The mountain has gained in popularity over the past 8 years. It's common to encounter high altitude Everest veterans having problems with the technical difficulties encountered on the crux pitches of this climb.

From Steven Shrader: The climb feels like a 5.8 - 5.9 depending on conditions (Steve has summited 3 times guiding) but it's really hard to say because I (Steve) have always worn plastic boots, and all the climbing is above 6000M. I would have to recommend allowing 5 weeks for this expedition, taking into consideration bad weather, sickness, and multiple summit attempts.

Information about how the peak gets its name from dmiki - Nov 02, 2005 12:57 PM
Mother and her Necklace , Mother’s Charm Box , Mother's Jewel Box
""Ama" means mother, grandmother or even world. "Dablam" means charm box, and is a special pendant worn by elder Sherpa women that holds precious items. The mountain has a hanging glacier that resembles a dablam and the two extending ridges are outstreched like a maternal embrace." 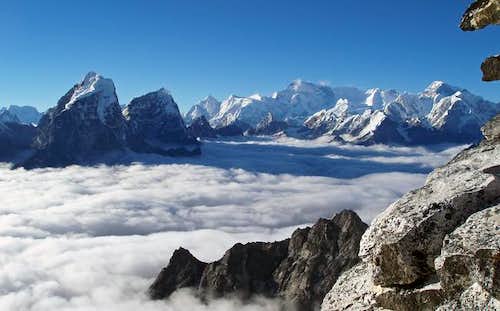 Ama Dablam, around 2 - 3 pm every day,clouds would cover the khumbu at around 4000 m leaving those of us above with a magnificent view.

To get to Nepal you will have to fly from either India, Thailand or Singapore.
To get to New Delhi India try (there are many others).
Air India
British Airways
Air France
Air Canada
Kuwait Airlines
Qatar Airways
Lufthansa
KLM
Royal Air Nepal
Once you get to Katmandu, you will have basically two options:
1 - Fly on Royal Air Nepal’s Twin Otter flights to Lukla - a small air strip about ten days from Everest Base Camp (eight from Ama Dablam Base Camp, allowing for acclimatization) 1 hour flight approx.
2 - Take a local Mini Bus hired by you or your Sherpa provider to Jiri. This is a small village at the end of the road. From here it is about a 14 -16 day trek to the Khumbu region.

If you have the time, do the walk for the following three reasons:
1 - You will have a chance to walk through one of the most lush and beautiful lowland areas in Nepal. This is an area that a lot of trekkers miss when flying to Lukla. You will also cross over two high passes with excellent views in all directions.
2 - By taking 2 weeks to arrive in the Khumbu area, and having already crossed over two high passes, you will be better acclimatized once you arrive in the high peaks area. You will enjoy this more, as you will be huffing and puffing less.
3 - You will be following the route taken by most of the early expeditions. There is a lot of history along that path. Why not soak it up? You will also have the bragging rights that you did the same route they did in years gone by.

Flying is fast and that has its advantages. If you have ever been in Lukla after several days of no flights after bad weather you will understand this. (Trekkers fight over seats to make their connecting flights home)

At the moment it is not possible to take the bus to Jiri. There are no busses going to the east of Nepal from Kathmandu because maoists shot at a public bus and killed several people, including civilians. After that, all the bus services were suspended. Nobody knows when the busses will be going again. If you really want to go to Jiri dispite of the worsening security situation (probably not a good idea) you have to hire a car.

Flying into Lukla 9,350 ft.:
(Note: walking times are approximate. A lot will depend on how you acclimatize.) Slowly descend to Phakding @ 8,700 ft, about a 2 hr walk from Lukla. You will probably overnight here.
The next morning, after about 2-3 hours, you will pass through Jorsale @ 9,100 ft. Here is where you will pay a fee and enter the Sagarmatha (Everest) National Parkland. You will then continue for another 2-3 hours uphill to the main Village of Namche Bazaar @ 11,300 ft. This is quite an elevation gain, especially for those who have flown in. You should rest here one to two days, doing small side trips etc. to acclimatize. When acclimatized, follow the Dudh Kosi along the high trail through Trashinga and the forest nursery to the small village of Pungo Tenga by the Dudh Kosi (10,650 ft). From there, it is a two hour uphill walk to the Gomba of Tengboche (12,687 ft).
This monastery was founded in 1923, but was destroyed by an earthquake in 1934, and again by a fire in the early 1990’s. It has been rebuilt with help from proceeds of the Sir Edmund Hillary fund. The next day (depending on how you are doing) follow the trail east through Deboche (12,325 ft.). Make your way to Pangboche (12,800 ft.). It is a full day hike from here across the river to base camp. 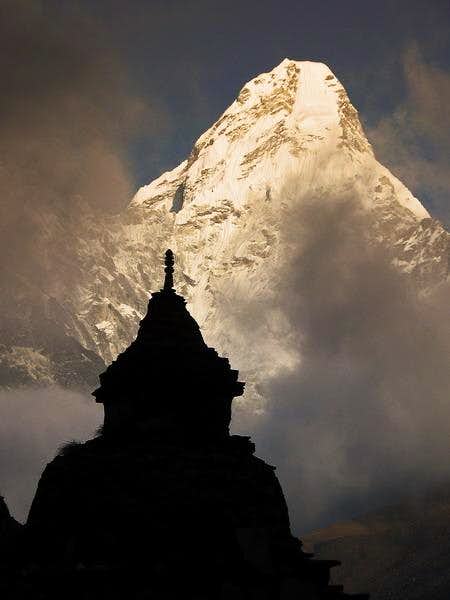 Yes there are permits required. These can be arranged by yourself or the firm that you hire to support your team. There is also an entry visa to Nepal.

The below can be of help.
Permits
The General Secretary,
Nepal Mountaineering Association
Post Box No. 1435,
Kathmandu.

As well, other fees apply; i.e. Liaison Officer, cooks, high altitude Sherpas, insurance for the expeditions employees etc. Be aware of the dates where there are no summit blackouts. You can be on the mountain, but are not allowed to summit. Rules are very strict in the Khumbu Park. You will have to make a $2,000.00 deposit for your garbage, and have it inspected to satisfaction upon completion of your expedition to get your deposit back. There are absolutely no fires allowed by westerners at Base Camp. If you burn your T.P., you loose your garbage deposit. Human waste is a major problem. This is something that should be well planned out on how to deal with so the mountain doesn't become more contaminated. One way to deal with it, leave camp, do your business on a nice saucer rock and huck that puppy. Unfortunately, the best way to deal with it is the same way Big Wall climbers in Yosemite do it and carry it down. Also, please carry all your garbage off the mountain.

For trekking: October to end of November are the most popular because of good visibility. The monsoon has cleared the air of dust. January to end of March is the next most popular as it gets hazy near the end of March due to dust from the plains of India.

October thru November
Author: ColdMountain
While trekking is most popular during post-monsoon, few climbers are tackling the peaks, except for some of the trekking peaks like Imja Tse, Mera, Pancermo, Ramdung, etc. Ama Dablam is a good climb post-monsoon, and a completely different mountain than in the spring pre-monsoon. Less snow, more hard ice, and much rock. For those hard enough to take on the North Ridge, the fall is best. The normal Southwest Ridge is a real classic in the fall, with stable rock, firm ice and flutes that are real natural works of art. The days are clear, warm, and crisp with the chance of snow later. As the season moves on, it will get much colder in the evenings (especially at base camp), making the ice harder and snow more consolidated.

Climbing: April to mid-May.
You should be prepared for all types of weather. The evenings will be cold for sure, but the daytime can be hot even at altitude. Be prepared for rain, sleet, snow, heat and leaches.

June and July
Mud, heat, rain, rain and for sure leaches.

climbers on Ama Dablam - October 22, 2004. Believe them to be of the Summit Climb group led by D. Mazur

Most of these groups guide in the Khumbu.

Hi I added the link in the link section. Alan already has a link there from before. Perhaps this is different. I will check them both out when i have a moment. Thanks and cheers

There are a lot of ways to fly to Kathmandu. I flew in from Istanbul. Also I just summited and the rocks on the Gray Tower are NOT stable. Serious rock fall danger if you have people far ahead of you. TV sized rocks came within 15 feet of me.