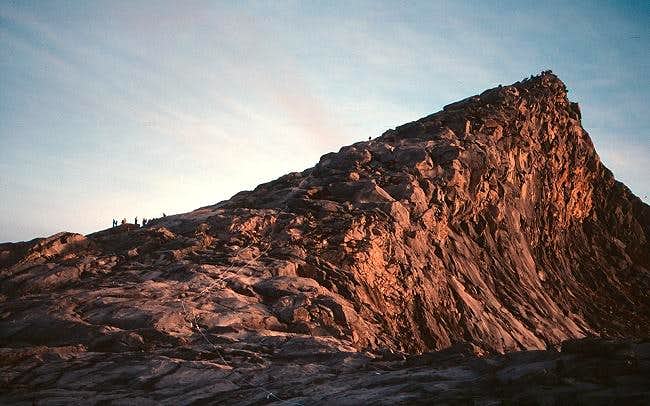 Low's Peak, the summit of Kinabalu, with the nylon rope trail marker visible.


If you do a web search on Kinabalu you will often find references claiming that it is the highest mountain in Southeast Asia. Indeed the Malaysian Tourist Board promoted that idea on posters in Singapore when I climbed the peak in 1997. At that time Myanmar was still called Burma and it was not a member of the Association of Southeast Asian Nations. However, it has long been considered part of Southeast Asia, and in the remote northern part of the country, where the Himalaya finally run out of energy, sits Mount Khakaborazi which rises to 5,881 meters (19,269 feet). It is Khakaborazi that is Southeast Asia's highest peak.

Kinabalu however, sitting on the island of Borneo in the Malaysian state of Sabah, is the highest point between the Himalaya and New Guinea, and a stunning jewel worthy of its UNESCO World Heritage status. Rising 12,000 feet out of the steamy Borneo jungles, like tropical mountains around the world its great climactic variation between base and summit supports a huge diversity in eco-systems, from cloud shrouded tropical rain forests to cloud-shrouded sub-alpine meadows.

The mountain is composed of glacier-scoured granite, and was formed from an uplift of magma millions of years ago. The glacier carved pinnacles, rising from the smooth granite dome, are a distinctive and unique feature of the peak. The highest summit is non-technical, but all other summits require rock climbing skills.  Some of these spires have fanciful names such as Ugly Sister Peak and Donkey's Ears, while others are named after omnipresent British monarchs such as Queen Victoria and King George.

The highest point, Low's Peak, bears the name of British Colonial Secretary Sir Hugh Low, who first climbed to the broad summit plateau in 1851. The actual summit was reached by zoologist John Whitehead in 1881. Two endemic Kinabalu birds, the Whitehead's Trogon and Whitehead's Broadbill are named for him. Lilian Gibbs, a British Museum botanist made the first ascent by a woman in 1910. She collected some species 1000 plants, of which nearly 90 were new to science. Several plants are named in her honor including Miss Gibb's Lipstick Flower, Aeschynanthus gibbsiae.

For climbers the routes on the peak range from the standard walk up trail to a huge and largely unexplored big wall. As noted above the highest point is a walk up, but there are many intersting sub-peaks and spires that require techical climbing. 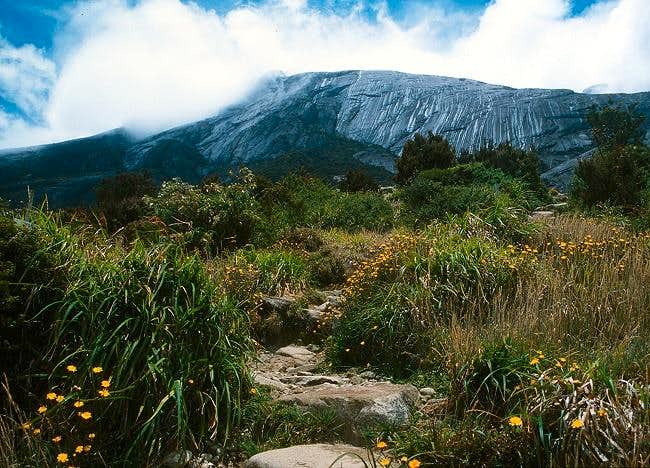 The upper montane zone, with the huge granite summit block.


The mountain's fauna includes primates such langurs, monkeys, and gibbons, although squirrels are the most likely mammal a casual visitor will encounter. There are countless butterflies, moths, and beetles, at least 40 species of frogs and toads, as well as snakes and slugs, which probably don't get the respect they deserve. More than 300 species of birds are recorded here. On my visit I was able to identify a dozen or so, including the Black-and-crimson oriole, Chestnut-capped Laughingthrush, and Black-sided Flowerpecker.

Most people begin by flying to Kota Kinabalu, capital of Sabah, where there are find many hotels from inexpensive to pricey. Depending on your flight schedule, it's not necessary to overnight in Kota Kinabalu since it's only a few hours from the airport to the Park.

From town, you can catch a bus at Padang Street (Jalan Padang) towards Ranau. The turnoff for the National Park is actually 14 kms (9 miles) before Ranau, so let the bus driver know you're headed for Kinabalu.

In my case I just missed a bus so I shared a taxi with three Malaysians. The cost was minimal and I was dropped off at the Park gate. The taxis hang around the bus station until they get enough people, then off they go. The system is not obvious (the taxis weren't marked) so ask around for other means of  transportation if you have a long wait. Note that this was in 1997, so the situation may be different today.

Update: SP member johnk supplied the following information regarding a May, 2006 trip: "also, i had no problems finding a taxi to the park. after reserving a dorm room at park HQ for the next day at sutera lodge, i walked across the street and caught a taxi to the park. "

The standard route is totally on trail. On the broad, open expanse of the summit block there is a thick nylon rope laid down to mark the route, so people don't wander off in the fog. The trailhead starts at  1,829 m (6000 feet), so the ascent involves about 2,270 m (7,500 feet) of climbing. You pass through all the main eco-systems from the dense rainforest, through the stunted montane zones, and out on to the barren sub-alpine summit. The transitions are remarkably quick. The huts are located at the upper edge of the montane.

Some further notes from my climb:
1) I was there alone (taking a long weekend from business in Singapore), so when we were signing up for guides at park headquarters I shared the cost with a Korean man and his young teenage son. The three of us and our guide more or less hiked together, which was fine as our paces were similar. In any case there are a lot of people on the trail and plenty of opportunity to meet and talk with other travelers.

2) We paid a bit extra to get a ride to the actual trailhead at the power station. Almost everyone does this. On the descent there are vehicles waiting to take you back to HQ, but these disappear in the late afternoon. Inquire about the timing on this (your guide will know) unless you don't mind walking the 4kms (2 1/2 miles).

3) I booked a room, back in the dark days of fax machines, in the Laban Rata resthouse (3,500 m / 11,000 feet), and shared that with some folks from Australia, Sweden and England. (My Korean partner was in another room)  I was expecting a primitive shack, but this is a full-service establishment, with comfortable bunks, electricity, hot water, and a sit-down restaurant. They are open at dinner hours, and then again starting at 2:00 AM to serve people heading for the top.

SP member johnk added: "it may be usful to know that the huts at laban rata are often booked 6 months in advance. it was not a problem for me, because i preferred to hike it in a day (with special permission from the park superintendent). (may 2006)."

4) Make sure you have a headlamp since you will be following the the summit block rope for several hours in the dark. Also good raingear and an insulating layer are important as it will likely be wet and temperatures could be near freezing. I carried a fleece jacket, hat and gloves that I worn under my Gore-tex shell. Several shivering people on the summit looked at me with envy, or possibly anger!


Note: according to the Sabah Tourism Board website there is a new trail: The Mesilau Trail was just recently opened and offers more opportunities for viewing flora and fauna. The Summit Trail is the main route taken by most climbers as it is a simpler and shorter approach. I have no first-hand knowlege of this trail so any further information is welcome.

The steep faces of Kinabalu offer a wealth of exploratory big wall climbing opportunities. Information about these faces is sparse and I can add nothing, having done only the standard route. (I have some friends in Singapore who may know about this stuff, perhaps I'll hit them up for beta on our next meeting).

For now I will provide a link I found, and hope that some enterprising and skilled SP member will add routes to this page. Thanks to SP member derekp62 for providing the following GPS waypoint files, which he plotted in April, 2008.

Also, check out his photo album. The mountain is located in Kinabalu National Park, a World Heritage site, and park regulations should be obeyed. A guide is mandatory for ascending the peak, and a special permit is required for technical climbing.

The  Sutera Lodge website (see below) lists the following prices as of March, 2005. Prices are in Malaysian Ringgits, which are currently at 3.8 to the dollar or 4.9 to the Euro.

Camping is not allowed in the park. There are several huts and guesthouses on the mountain, which require prior reservations. They can be booked online from Sutera Sanctuary Lodges. Prices at the base of the peak range from 12 to 1,200 Malaysian Ringitts per night, so something for all budgets! The Laban Rata accomodation, high on the mountain, can also be booked from a link on that page.

March - April is the driest time of the year, and November - December is the wettest. But depending on your luck you can hit a wet or dry period at any time of the year. Whenever you go be prepared for rain, especially on the mountain, where the weather forecast is always the same: some sun, some clouds, chance of rain, hot or cool depending on elevation and time of day.

it may be usful to know that the huts at laban rata are often booked 6 months in advance. it was not a problem for me, because i preferred to hike it in a day (with special permission from the park superintendent). also, i had no problems finding a taxi to the park. after reserving a dorm room at park HQ for the next day at sutera lodge, i walked across the street and caught a taxi to the park. (may 2006)

Thanks much for the updates. I have included them in two sections on the main page. Let me know if you have more to add.

I climbed Kinabalu by the standard route in 2006. I was impressed by how clean the trail was compared to other jungle treks I made in Malaysia. The guides and other park staff are deeply invested in keeping the park clean. It's a strong argument in favor of the guide system.