McClellan Butte is a prominent pyramidal horn-shaped summit rising above the South Fork Snoqualmie River valley of the Mount Baker-Snoqualmie National Forest. Located approximately eight miles southeast of North Bend, on the south side of I-90, the standard route for the mountain is only a short drive from urban areas yet close enough to the Central Cascades to enjoy views of many nearby mountains. With an elevation of 5162' and clean prominence of 1442', McClellan Butte is neither the tallest nor the most prominent peak of the I-90 corridor between North Bend and Snoqualmie Pass. However, McClellan Butte offers a decent combination of an easy YDS Class 1 hiking trail and a final YDS Class 3-4 (depending on conditions) summit scramble, with an outstanding view overlooking much of the South Fork Snoqualmie River valley. These aspects help make McClellan Butte one of the most popular mountain hiking and climbing destinations in the region. 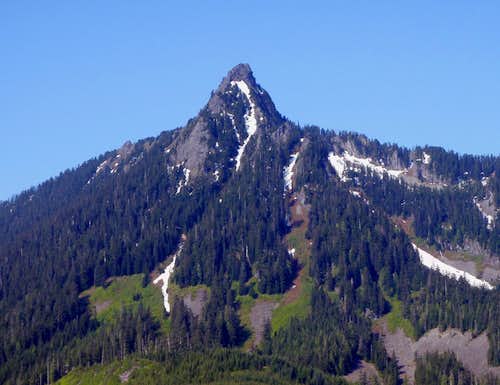 McClellan Butte was named after George B. McClellan, a Civil War general and a surveyor during the mid-19th Century. McClellan surveyed the Cascade Mountains during 1853, in search of the most viable mountain pass that could be used for the proposed trancontinental railroad system. Although McClellan's survey basically ignored nearby Snoqualmie Pass, which would be the actual mountain pass eventually used by the Pacific Railroad, his efforts and dedication did not go unnoticed and "McClellan Butte" was named in his honor. 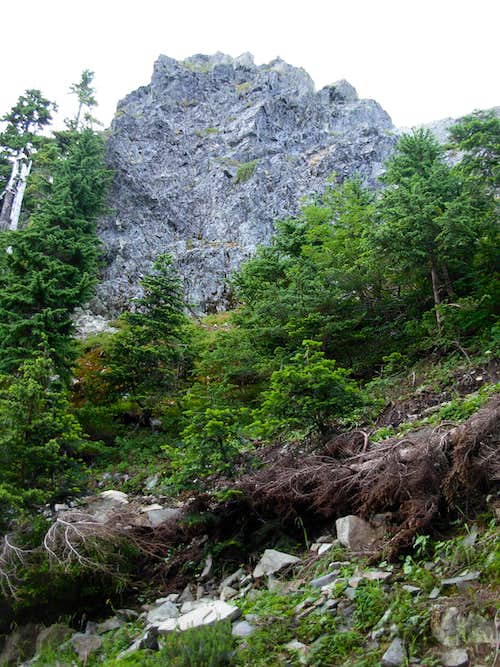 The McClellan Butte Trail (#1015) has approximately 3300' elevation gain in 4.6 miles of maintained/easy-to-follow YDS Class I trail from the trailhead to the summit block, then with a short distance and elevation gain (~100') of scrambling to the summit. The first half of the standard route travels through a mixture of old-growth and second-growth forest, and some of the largest-diameter evergreen trees in Washington State can be found on the mountain slopes. The second-half of the standard route travels past at least five avalanche gulleys, all of which require extra caution when traversing during snow-covered periods. The final 0.6 miles of the McClellan Butte Trail circles around the southwest side of the mountain ridge to the rocky summit block. 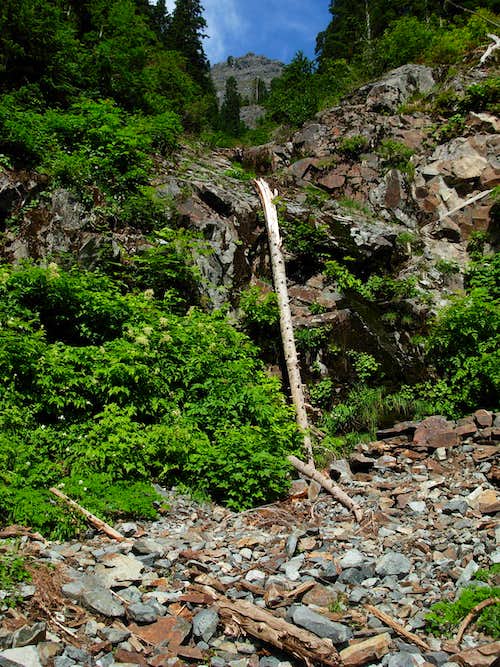 Looking Up A Steep Avalanche Gulley

The final rocky summit slope has plenty of natural handholds and footholds available for climbing/scrambling. However, this section has a lot of exposure and a fall might likely be fatal. Traversing the final summit slope is not recommended when the rocks are wet. Roping and belaying is not typically necessary, but common sense and extra caution are always needed for traversing this section of the mountain. 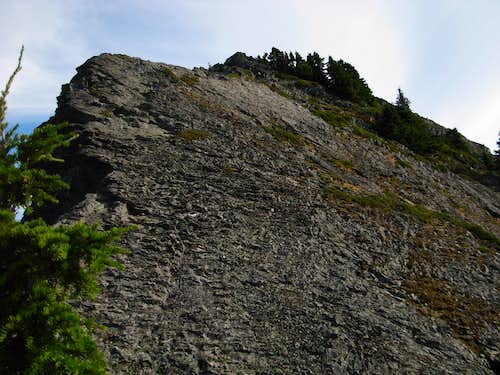 Animals are commonly found on the mountain slopes. Mammals include mountain goats, cougars, black bears, squirrels, and pikas. Birds include eagles and pileated woodpeckers. Amphibians include frogs and salamanders (in the meadowy sections of the mountain). 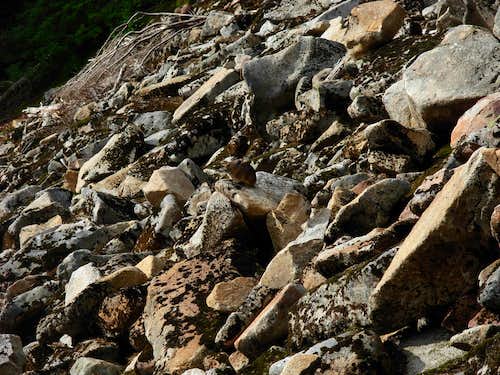 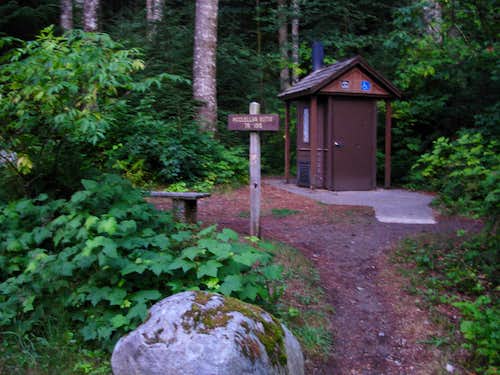 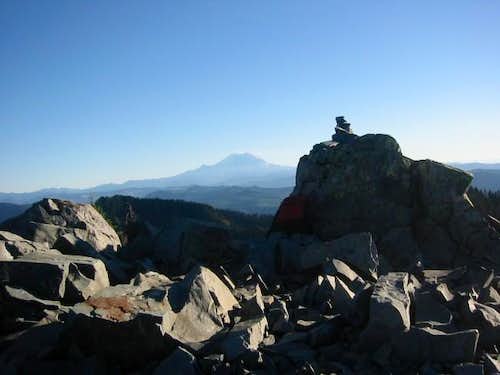 Some hikers have been known to eliminate 1.5 miles hiking distance (each direction) by taking Exit 38 off I-90 and following Forest Road 9020 south until its intersection with the McClellan Butte Trail. However, the Mount Baker-Snoqualmie National Forest greatly advises against using this method and only wants hikers to use the official parking area for McClellan Butte Trail #1015. The Mount Baker-Snoqualmie National Forest emphasizes that Forest Road 9020 might be gated and locked at any time, at drivers' own risk. Plus, parking space is limited and unobstructed Forest Service access to the road is required at all times.

A Northwest Forest Pass is required to access this area.

The McClellan Butte Trail is typically not recommended during months of snow-cover, due to extremely high avalanche dangers. For current trail conditions, contact the the North Bend Ranger Station at 425-888-1421 (Seattle 206-622-8378).

The prime timeframe to climb McClellan Butte is between mid-July and mid-Autumn, while snow is not present on the mountain and/or avalanche dangers have passed. During snow-covered months (usually between mid-Autumn to mid-Spring/early Summer), extremely high avalanche dangers exist on the mountain and especially where the McClellan Butte Trail crosses several steep avalanche gulleys. The use of an ice axe and crampons is highly recommended on the mountain during periods when snow is present. As previously mentioned, it is not recommended to climb the final summit scramble during wet conditions, as the rocky slope can be slick, mossy, and unstable in places. Roping and belaying is not typically necessary for the upper summit slope, but common sense and extra caution is required during the final ascent and descent. 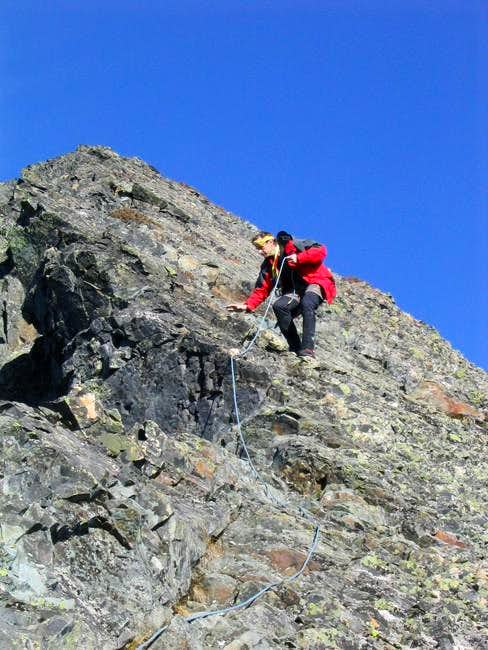 With that mentioned, McClellan Butte is still a semi-popular climbing destination for experienced climbers during snow-cover in Winter and Spring months as both a training climb and a conditioning climb. 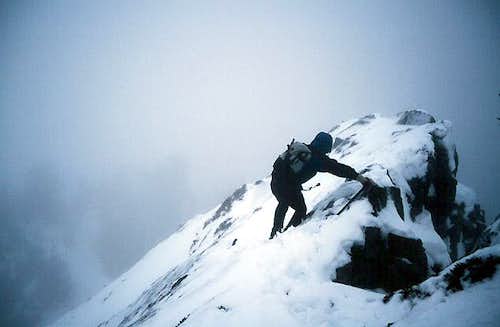 Camping is not permitted on McClellan Butte or at the trailhead.

However, Tinkham Campground is an official established campground located only a short distance (less than one mile) along Forest Road 55, from the turnoff for McClellan Butte Trailhead.