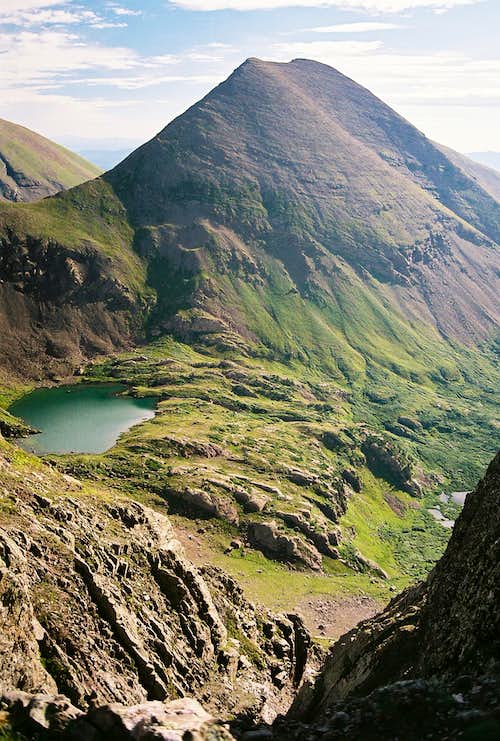 Humboldt Peak rests 1.5 mile northeast of its more famous neighbors, Crestone Needle and Crestone Peak. These conglomerate peaks reside within Colorado's linear Sangre de Christo Range. This fantastic stretch of mountains starts where the big and bulky Sawatch Range ends, just south of Salida, Colorado. Continuing south for 220 miles into New Mexico, the Sangre's host some of Colorado's more adventurous climbing. In contrast to the class 3,4,and 5 climbing within the Crestone Group, Humboldt offers a class 2 hike. As such, Humboldt Peak serves as the "introduction to the Sangre de Cristo" mountains for many a peak hunter.  The standard West Ridge route is a perfect introduction for hiking Colorado's famous fourteeners. Although not technically difficult, Humboldt requires a long approach and plenty of vertical (4,464 ft.). Be in shape so you can really enjoy this epic hike into a beautiful basin.

Humboldt Peak was named for noted German geologist and naturalist Alexander von Humboldt, who was an international celebrity in the early-to-mid 1800’s. He advanced studies in the fields of plate tectonics and biogeography, and even held an altitude record for reaching 19,286 feet on the 20,703-foot Mt. Chimborazo. This record lasted for 36 years. Although Von Humboldt was an expert in western U.S. plate tectonics, it is apparent that he never visited his namesake mountain. (Courtesy of SenadR)

Much of the information on this page is courtesy of Kane Engelbert.

Special Note: I have the honor of recently adopting this page from long-time SP member Alan Ellis.  From a base in the US state of Oklahoma, Alan has contributed much to the content and community of SummitPost.  I have enjoyed the honor of climbing with Alan and his wife Jackie, and am proud to assume responsibility for this page.  Climb on, Okies!


Getting There via South Colony Lakes TH 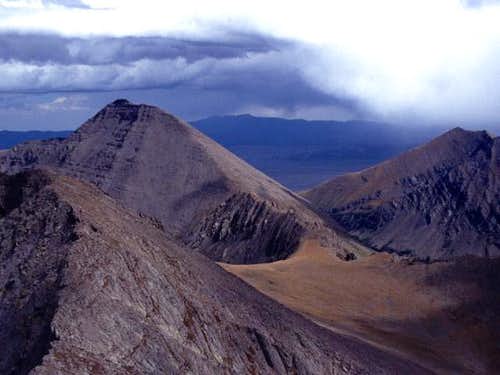 Humboldt Peak from the east ridge of Kit Carson Mountain, September 11, 1999. Photo by RWSchaffer
Humboldt Peak is located in south central Colorado approximately 12 miles southwest of Westcliffe. There are several trailheads, the most popular being the South Colony Lakes trailhead on the east side of the range near Westcliffe. The peak is rarely climbed from the west side of the range.

From Westcliffe, Colorado: Drive southwest on highway 69 about 4.5 miles to Colfax Lane (CO119) where there is a Forest Service sign. Turn right (south) and go another 5.5 miles until the road ends, then turn right (going west) on South Colony Road (Forest Service Road 120) for 1.5 miles where there is a fairly large parking lot on the right. Low-clearance vehicles can park here but recent improvements in the road (July 2006) allow 2WD vehicles to continue for another 2.6 miles to a new gate and parking lot (30 vehicles) located approximately a half-mile past the Rainbow Trail marker. The road is closed at the gate and the parking lot. From the gate west of the Rainbow Trail, it is a 4.5 mile hike to South Colony basin. From the new gate, follow the old road for another 3.5 miles until the road turns into a trail. Upon arrival at lower South Colony lake, the trail forks and a small wooden sign (photo) will greet you. The sign says, "Crestone Needle Standard Route," with an arrow pointing to the left. Take the right fork and head toward the upper lake to begin your climb of Humboldt. 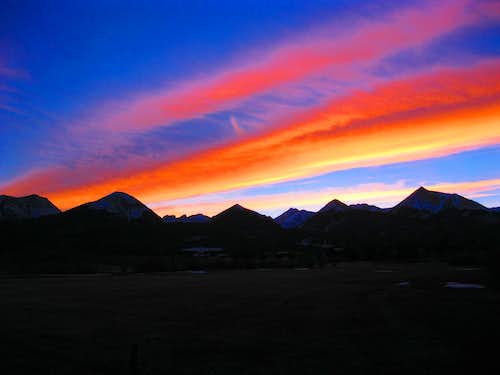 Fiery Sunset over Sangre de Cristos | rockthrowjoe
Humboldt Peak is located in the San Isabel National Forest inside the Sangre de Cristo Wilderness Area. No permits or fees are required. Although the entire range, the mountain, and South Colony Lakes are in the wilderness area, the Forest Service road (FR120) is not. No camping within 300 feet of the lakes or streams. Rangers make daily trips up to South Colony Lakes and camp in the area looking for violators. 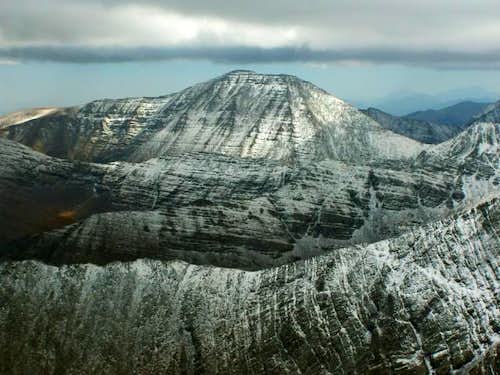 Humboldt Peak from the north. Photo by LarryV
As with most Colorado high peaks, late June through mid September are best for summer season climbs. Heavy snow can linger well into June and the first snow falls in September. The mountain has also been climbed in the dead of winter by experienced winter mountaineers. September can be a wonderful time to climb. The weather settles as fall high pressure systems move through and provide several continuous days of cool, clear skies. Violent afternoon thunderstorms are a daily occurance. Start very early. Storms typically hit early afternoon and can last until after dark.

In May the road is free of snow up to about 9,500 ft. Keep in mind these are the Sangres and these mountains typically lose snowpack faster than other ranges in Colorado due to it's dry climate.

There are several Forest Service campgrounds nearby. The closest is Alvarado, located on CO140, 5 miles west of highway 69, and one mile north of the Colfax Lane turnoff. Alvarado has 47 sites and can accomodate up to a 35 foot RV (no hookups). Alvarado is at 9000 ft which is a good place to spend the night and acclimate. Alvarado campground host: (719) 489-2744. There are other Forest Service campgrounds in the area. None have showers but most have rest rooms and drinking water. Call the Forest Service at (719) 269-8500 or (719) 783-2079 for more information on other FS campgrounds nearby. Here is an excellent link for Colorado Camping Reservations. An additional reservation fee of $8.65 is charged for this service.

Eberling Mobile Home and RV Park: In Silvercliff on the east side of Westcliffe. (719) 783-9778. Coin operated showers and laundromat. 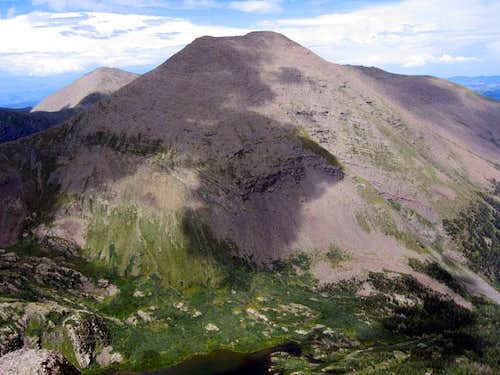 Humboldt Peak as seen from the summit of Broken Hand Peak. Photo by Ryan Schilling 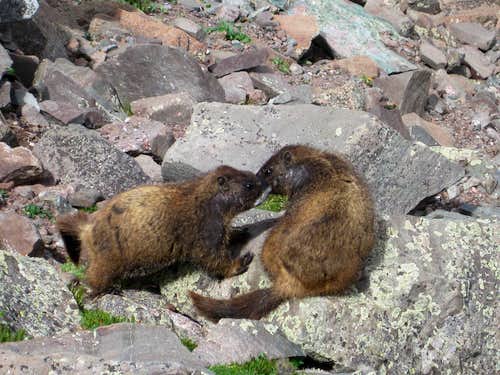 Westcliffe has a grocery store on the west end of town.
Pay showers and a laundromat are available at the Eberling Mobile Home and RV park in Silvercliff on the east side of Westcliffe.

In Tribute To David Worthington, aka "TalusMonkey"

This page is dedicated to David Worthington, also known by many as "TalusMonkey." David was a very experienced climber who was tragically killed on Humboldt Peak on May 7, 2007. In brief, David lost control of a glissade while descending the south face of Humboldt Peak in winter conditions. Search and rescue efforts were valiant; however, David succumbed to his injuries by the time he reached the hospital. See this link for a pictorial of the rescue attempt: www.hikingtherockies.com

David completed Colorado's 58 named 14ers in 54 weeks (Aug 2005-Aug 2006) which is an incredible accomplishment. He was an avid participant of www.14ers.com where he had climbed with many of the site's members. 14ers.com has set up a memorial website for him: http://www.14ers.com/talusmonkey.html

David was best known for his experience in the mountains, his love of the outdoors, and his summit antics which usually included dancing and a can of Colt 45. The mountains will not be the same without him and he will be greatly missed.