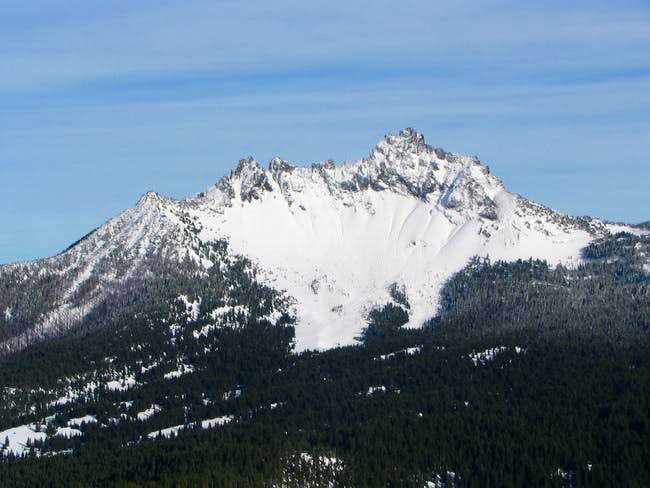 Three Fingered Jack, rising between Mt. Jefferson and Mt. Washington, is one of the oldest high volcanoes in the Cascades. It has some very poor, rotten, friable rock. It is characterized by a high ridge above a base of scree. On a clear day, the summit has excellent views up and down the line of peaks from Hood in the north down to Southern Oregon. It is a fairly popular climb in the area although not without some exposure involved in the climb. You need to bring your own water in and try to be sensitive to the erosion going on if not climbing or descending in snow.

The South Ridge Route is the most popular and the only one really recommended. I do not know anyone who has done anything other than the South Ridge Route but other routes are described in Jeff Thomas' "Oregon High", although the rock quality is reportedly very poor.

Originally named Mount Marion, it was renamed in the early 1900's. The two most popular theories about the name are that it was a) named after a local trapper in the area at that time and b) named due to 3 prominent pinnacles at the summit. The latter sounds more probable but who knows?

From Portland, take I-5 south to US 22 in Salem, OR. Take US 22 east towards Bend until it merges with 126/20 (Santiam Pass Highway). Just west of the pass and just east of the Hoodoo Ski Area you will see the Pacific Crest Trailhead lot on the north side (left) of the road. It is well marked. Pull in here, the trail begins from this lot.

If coming from the east (Bend), take US 20/126 west until just after the pass and look for the signs and lot on the right side of the road.

If possible, try not to plunge-step down anything but snow as the sand/rock field at the base of the mountain is rapidly eroding.

Although some people climb in the winter, the best time is from June to October. It is harder obviously in the winter as the technical parts of the climb are icy but the loose rock would be better frozen in snow.

Free camping is allowed in the area - follow guidelines at the trailhead to have low impact on the land. Most people camp at or near the trailhead for the PCT on the Santiam Pass Highway.

Click here to link to a campground page through a local ski area that is just across the highway from the trailhead that can provide info on many area campgrounds.

For good info try these websites, addresses and numbers: