Mount Greylock is located in the Berkshire Mountains, and is the highest mountain in Massachusetts. At 3,491 feet, Greylock wouldn't seem to be too remarkable, but this is actually one of the most scenic mountains in the Eastern United States. It is so inspirational that legend has it, Mount Greylock's long, saddle-like shape inspired Herman Melville to write "Moby Dick". He was known to have great fondness for the mountain, even setting up a special observation deck at his home (near Pittsfield) so he could view Greylock whenever he desired.

When you travel to Greylock, it is obvious why people believe the legend and why Melville went out of his way to keep the mountain in his sites. Greylock can be seen for miles around, and is a quite impressive site given that is rises nearly 2,700 feet above the surrounding town of Adams, Massachusetts. Furthermore, it's very colorful, and has a steep slope that shoots up into the sky, unlike most mountains you'll find of this height in New England. This is because Greylock is a Monadnock - a lone, isolated mountain rising steeply above the surrounding area.

You can either drive to the summit, or take moderate-to-long day hikes (the shortest taking less than 90 minutes to reach the top). The summit offers great views of the Green Mountains to the north, Catskills to the southwest ,and the Adirondacks to the northwest. On a clear day, you can even see the White Mountains of New Hampshire. However, the summit area itself is very large, and once on top, you need go to different look-out points to see the Eastern, Western, Southern, and Northern views.

As for the summit tower, I do not recommend wasting your time to climb it. The windows are grimy, making the view very poor, and the view points at the sides of the mountain are much clearer and more interesting. There is so much to take in at the summit it is better (and more enjoyable) to take the time to walk around it to see all the splendorous views.  As of May 2016, the tower is under repair. 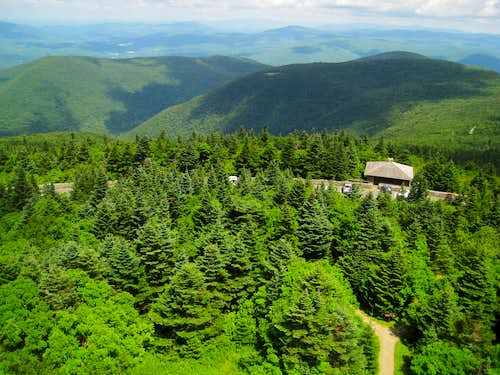 Mount Greylock is located in Berkshire County in the Northwest corner of Massachusetts. It is rather isolated from major cities. The nearest "city" is Albany, New York. Getting to Greylock from most major urban areas requires getting to Lanesboro, Massachusetts (which is to the south of Greylock). Coming from the North, you will want to reach the town of North Adams. Once in North Adams, the routes are more self-explanatory (see the route pages to the left for options from North Adams), but from Lanesboro the options are more complicated. They are explained below.

Option #1 - If you want to drive to the summit, watch for the Mount Greylock Reservation and Visitor signs on the right of Route 7, two miles north of Lanesboro. Turn right at North Main St., the visitor center is on the right just before entering the gates to the reservation where you can obtain maps and trail information. Continue on Rockwell Rd. for 9 miles to the summit.

Option #2 - If you want to hike the Hopper Trails (explained in the route pages to the left), you will stay on Route 7, to the West of Greylock.

Option #3 - If you want to hike the Cheshire Harbor Trail or the Thunderbolt Ski Trail (explained below), then head east from Lanesboro to the town of Berkshire, and get on Route 8, to the east of Greylock. Go North to find the trailheads about 8 miles up the road in Adams (elevation 799 feet).

FROM MASSACHUSETTS
If you want to take the MASS PIKE, take it to exit #2 in Lee. Follow Rt. 20 to Rt. 7, pass Pittsfield, and go another 6 miles to Lanesboro.

To take a scenic (and more direct route) from Boston, take Route 2 across the state. It is about 130 miles to North Adams, but is more scenic than the MASS PIKE. From North Adams, you can travel South on Route 7 or Route 8 for whichever trail you want to hike.

FROM GEORGIA
Yeah, I said Georgia! The Appalachian Trail starts in Georgia, and only about 1,560 miles later, you will reach the summit of Mount Greylock. Or, if you want a shorter (albeit more dangerous route), you can start at Mount Katahdin in Maine, and hike about 600 miles to Greylock on the Appalachian Trail Southbound. Note that these two ways will probably take a large chunk of your year, and for those of you like me without as much time on your hands, I suggest the many day hikes listed in the routes sections.

If you like to avoid the crowded lifts and lodges during ski season Mt. Greylock offers excellent backcountry skiing. In the fall of 1934, thirty Civilian Conservation Corps members cleared this 1.6 mile trail 2,175 vertical feet down the east side of Greylock with a maximum gradient of 35 degrees.

Trail Description:
On the northern side of the town of Adams, bear right onto Friend Street, follow this Friend Street (which will become West Road), and then approximately 1.5 miles will be Thiel Road. Turn right onto Thiel Road, pass through the Jaeschke's Apple orchards and into the Geylock Glen. Thiel Road continues straight past the intersection with Gould Rd. and you can park at the end to access the Thunderbolt Trailhead. Hike up the steep trail, and at 1.6 miles you reach the ridge crest and meet up with the Appalachian Trail. Turn left (south) on the AT, to reach Greylock Summit.

This site has a more detailed description of the trail.

There are no permits or fees required to hike Mount Greylock.

The Rockwell and Notch Roads to the summit and the Lodge are closed form Columbus Day to Memorial Day. Camping is only allowed in Sperry campground and designated campsites. There is no camping within the Hopper Natural Area except for Wilber's Clearing Shelter.

There are no parking passes required, but you will be charged $2.00 to park at the summit parking lot. Overnight parking is only allowed on Hopper Rd., Sperry Campgroad, the Visitor Center, and Bascom Lodge. Great care should be taken while hiking in the sub-Alpine forests of Greylock, Fitch, and Saddleball Mountains. These are the only boreal forests in the state, so protect the trail that pass through these unique forests.

While the summer is the most popular season for hiking on Greylock, the fall and winter colors are very rewarding, and the mountain is far less crowded. The summit in winter may be forbidding even for such a small mountain, and one should expect high winds and zero visibility. If hiking Greylock in winter, it is best to use the Appalachian Trail or the Cheshire Harbor Trail, both of which are well-maintained, and accessible all year long.

Mount Greylock is generally a day hike. However, there is camping along the Appalachian Trail which travels 90 miles through Massachusetts. There are also multiple campsites at the Mount Greylock State Reservation. There may be fees for some campsites, and the most popular spots may require making reservations. Camping is only allowed in designated areas.

For more information on campsites, or to make a reservation, visit the Mount Greylock State Reservation information site.

For those of you who don't like "roughing it", there is a hotel at the summit called the Bascom Lodge, which is open in the warm-weather months.

For spring, fall, and winter conditions, you can call the Mount Greylock State Reservation at: 413-499-4262 or 413-499-4263 or you may call the Massachusetts Department of Conservation and Recreation at: 617-626-1250 for more information if these numbers cannot be reached.

Being that Greylock is a tourist destination, there is plenty of information about it on the web. The purpose of this page is to explain how to hike Mount Greylock, provide information on routes up the mountain and directions to get there, and to provide quality photos of the hiking experience. If you would like more historical information or other information not on this site, I suggest you take a look at the links page on the left.

Greylock is really the highest point in a large saddle that includes several notable summits, which are the highest mountains in Massachusetts. These summits include Saddle Ball Mountain(3,247ft.), Mount Fitch(3,110ft.), Mount Williams(2,951ft.), and Mount Prospect(2,690ft.), all of which can be traversed including Greylock along the Appalachian Trail (which crosses the Greylock summit). These five mountains form a large glacial cirque on the western slope of Greylock called the Hopper. The Hopper is a National Natural Landmark which contains ancient old growth Spruce. Greylock and Saddle Ball Mountain are the southern most mountains in the Northeast that are home to Boreal & Sub-Alpine forests.

Greylock and the surounding mountains are protected by The Mount Greylock State Reservation. The reservation incorporates over 50 miles of trails including the Thunderbolt Trail, a ski trail which descends Greylock's steep eastern slope 2,175 vertical feet in 1.6 miles. The origin of the name comes from a roller coaster at Revere Beach near Boston. The first Massachusetts United States Eastern Amateur Ski Association downhill championship race was held on the Thunderbolt Trail in 1935. National Downhill Champion Joseph H. Duncan of Colorado called it: "undoubtably the most thrilling wooded run yet built in the country-it beats anything in the Rockys."

Unfortunately, Greylock has a road to the summit along with a memorial tower. The Bascom Lodge (the hotel on the summit) was built by the Civilian Conservation Corps (CCC) in the 1930's.

Update: There continues to be a fence around the tower, with some kind of work being done. - 19 May 2016