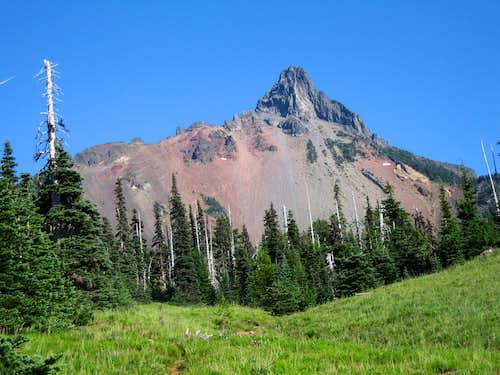 From the West: Photo by markmay

Mount Washington is the central plug (volcanic neck) of an extinct shield volcano. Details of the mountains origin, eruptive history, geology, and geomorphology can be found at this USGS Mount Washington page

The mountain is located in the Mount Washington Wilderness of the Willamette National Forest. The main access to its slopes is via the Pacific Crest Trail.

Because of its beauty, easy access, and relatively simple summit route, Mount Washington is a very popular destination and the normal route can be crowded, especially on weekends.

Summit views are excellent with Mt. Jefferson and Three Fingered Jack to the north and the Sisters complex to the southeast.

The first ascent was made via a north ridge variation in 1923 by Armin Furrer, Leo Harryman, Ervin McNeal, Phil Philbrook, Ron Sellers, and Wilbur Watkins. The original ascent route no longer exists due to rock fall.

Starting up the N Ridge

The rock on Mount Washington has a reputation for being extremely poor. Jeff Smoot describes only the North Ridge route in his CLIMBING THE CASCADE VOCANOES guide stating that most people probably would not want to climb any of the other routes anyway due to the poor rock.

All routes on the mountain are Class 5 with the North Ridge being the easiest. The ridge is wide and several variations are possible ranging from about 5.0 to 5.3.

In A CLIMBING GUIDE TO OREGON (1975) by Nicholas A. Dodge, 12 different routes and several variations are described. The routes include lines on all sides of the peak.

At least one guiding company takes clients on two routes other than the North Ridge, those being the Southeast Spur (5.5) and the West Ridge (5.8).

This video provides a good idea of what the approach, the climb, and the descent are like - just don't pay too close attention to some of the sappy dialogue.

There are two common approaches to the mountain from the north, via the Pacific Crest Trail from its trailhead or via an unofficial trail connection to the Pacific Crest Trail from the Patjens Lake Loop Trail starting on the west side of Big Lake. The approaches are about the same distance. Which you chose to use may depend on if and / or where you camp. 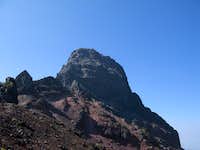 Closer view of the
North Ridge

Take USFS 2690 to just before Big Lake, turn left on road 500 (sign for PCT trailhead). It is about .5 miles to the trailhead. There is ample parking at the trailhead with no NW Forest Pass required.

Follow the PCT south for about 3.5 miles, to a climbers' trail which goes uphill to the east. The climbers' trail is usually marked by a cairn and is just after a large rock on the left side of the trail. If you reach Coldwater Spring, the only year-round water source on this section of the PCT, you have missed the climbers' trail and hiked about 10 minutes too far. About 150 feet after leaving the PCT, the climbers' trail splits. The right fork can be used to gain the west ridge or routes on the south face. The left fork gains the North Ridge. The trail is very well worn and easy to follow. 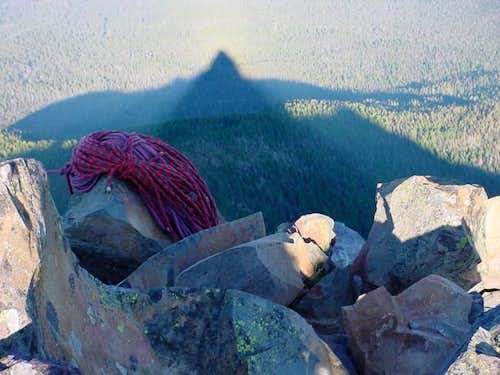 Take USFS 2690 to the trailhead (about 4 miles from the pass) which is located on the west side of Big Lake.

Follow an unmarked trail along the lake for two or three minutes, to a junction with a second trail called the Patjens Lake Trail. Continue around Big Lake until the trail leaves the shoreline. At an obvious junction, turn left (east). (Continuing straight will lead away from Mt. Washington to Patjens Lake.) Head east for about five minutes. Several spur trails will join the trail from the west, but continue east until the trail splits. Take the right fork for two or three minutes to a clearing with a pile of dead logs on its south side. (The left fork continues around the east side of Big Lake). Turn right (south) in the clearing and follow a wide trail for five minutes to its junction with the Pacific Crest Trail (PCT). From here it is about 1.75 miles to the climber’s trail described above.

To more easily gain climbs on the east side of the mountain follow US 20-126 to the Big Lake turnoff as before. Turn south on USFS 2690 and drive about 3 miles. Turn left (east) on USFS 811 and follow a rough dirt road 3 miles to Hortense Lake. Follow a trail south for about 2 miles to Cache Creek. Leave the trail and travel cross country up Cache Creek and through meadows above to the east side.

The mountain is located in the Mount Washington Wilderness of the Willamette National Forest.

A wilderness permit is required between Memorial Day and October 31. They are available free at the trailheads.

Summer and Fall after the rock and the PCT are relatively free of snow.

There are numerous campgrounds in the area.

See this map with locations and links Forest Campgrounds

Within the wilderness, there is no water available except at Coldwater Springs which is about 10 minutes past where the climbers trail joins the PCT.

There are free campsites (no water or facilities) at the PCT trailhead on the north boundary of the wilderness. Many 4WD and trail bike (the noisy motorized variety) enthusiasts use the PCT trailhead camp areas so beware.

Camping and lodging are also available in and close to nearby Sisters.

For conditions, you can contact the McKenzie Ranger District.