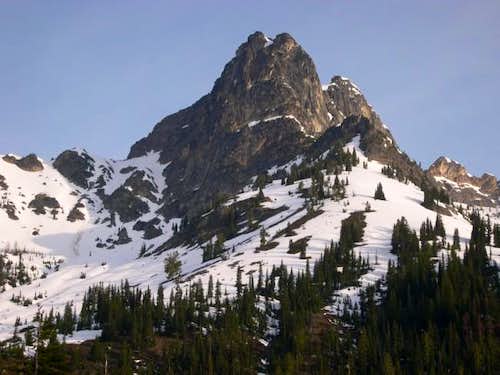 Cutthroat Peak from the highway (south). Photo by rpc

From the SSW
Summit of Whistler 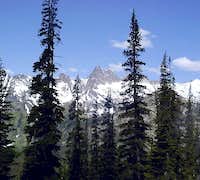 Cutthroat Peak is located about two miles west of Washington Pass in Washington's North Cascades. This rugged mountain appears to be a stand alone tower from most vantage points along the North Cascades Highway but, the mountain actually has a north and a south peak. The south peak is the higher of the two at 8,050 feet. The USGS quadrangle map erroneously has the name of the peak written next to the lower 7,865 foot north peak.

Kenneth Adam, Raffi Bedayn, and W. Kenneth Davis made the first ascent of Cutthroat Peak 22 July 1937 via the West Ridge.

Paul Ekman and Joe Weis made the first winter ascent of the peak 1 January 1977 via the South Buttress. 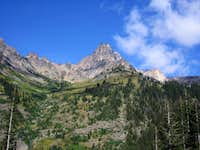 Most of the approach from the highway

The peak is easily accessed from the North Cascades Highway. There is a broad shoulder with adequate parking located about one half mile west of the Blue Lake Trailhead on the west side of the pass. There is a climber's trail starting from the west side of a group of trees near the eastern end of the main pull off where most people park. It is usually marked with cairns and may take a little searching to find. The trail leads into the basin south of the peak.

Washington Department of Transportation web site with information and updates on the spring opening of Wasington Pass:

No permits are required to climb Cutthroat Peak 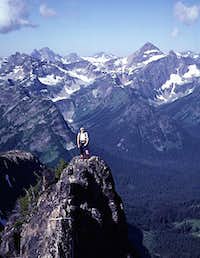 On the W Ridge

The rock on Cutthroat Peak is generally of the same excellent quality as that of its neighbors in the Liberty Bell Group.

North Ridge Grade II and up to 5.7 depending on the variation taken. The easiest route avoids the pitch out of the notch between the North Peak and the main peak which is described as a 50 foot 5.7 lieback.

East Face Couloir Grade III to IV steep snow and ice. This winter / spring route ends at the notch between the North Peak and the main peak. It consists of 5 pitches of snow and ice with potential avalanche danger.

On the S Buttress

Southeast Corner (Firefighter) Grade IV, 5.11c. Starts in the 200 foot dihedral on the corner. Six to seven pitches ending on the false summit.

South Face of South Buttress Grade III, 5.7 & aid. Climbs the narrow and smooth face of the buttress to its top.

South Ridge Moderate class 5 from the notch between the North Peak and the main peak.

Northeast Face A complex route with climbing up to 5.8.

Best climbing is July - September after the snow retreats and the pass is open.

Some folks "bivouac" at the Blue Lake Trailhead.