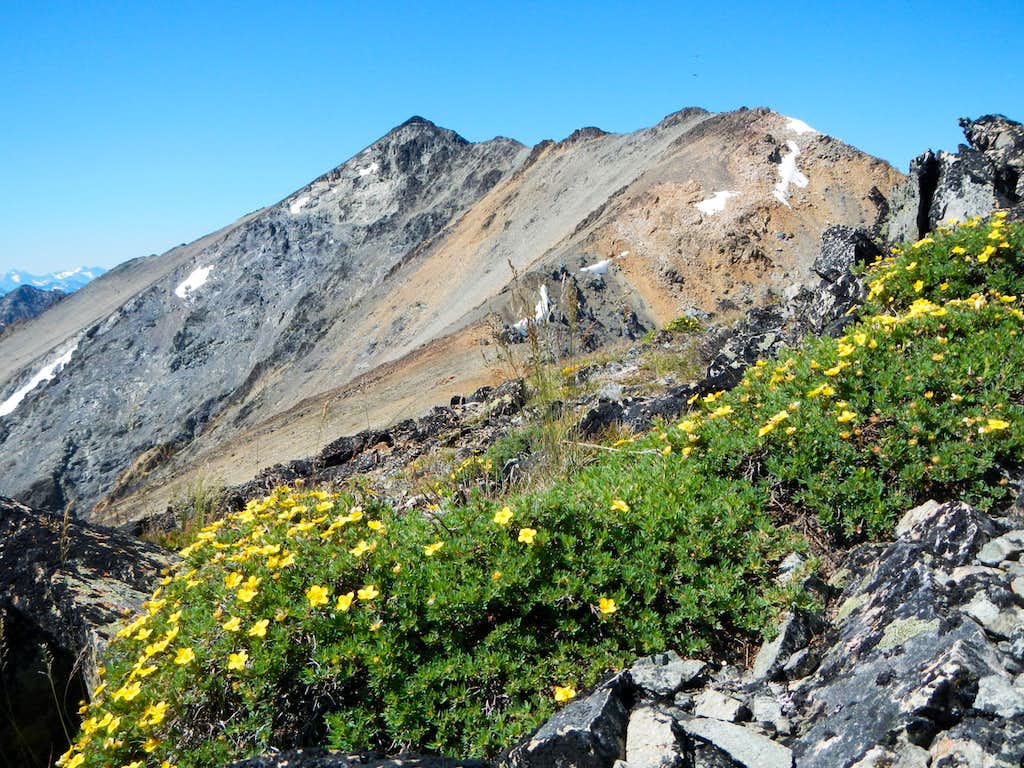 Bare slopes on the upper mountain
Robinson Mountain is a massive broad peak located at the southern edge of the Pasayten Wilderness. It is the 35th highest peak in Washington State or 30th if you don't count volcanic sub-peaks. It was named after early settlers in the area, brothers James and Thomas Robinson who stayed in a cabin on Robinson Creek during the wnter of 1887. The first ascent took place in 1904 by Edward C. Barnard and company (USGS survey party). 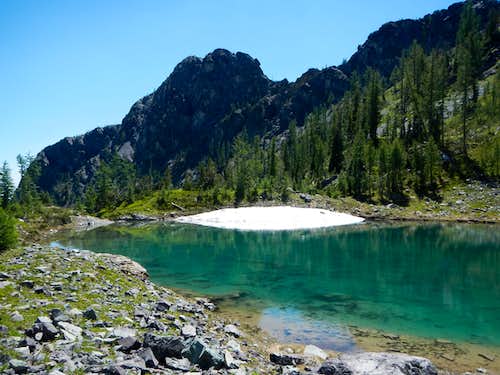 The Tarn
The south face of Robinson rises 4500 feet above Robinson Creek. From the summit 3 main ridges extend to the west, the north and the southeast. At 2 miles distant the west ridge rises in another named point, Devils Peak. The north ridge curves around to the east and joins Beauty Peak. The southeast ridge is the standard route of ascent, accessed by Beauty Creek. This ridge scramble is a mile long and has several sections covered with loose rock, but the difficulty does not exceed class 3. 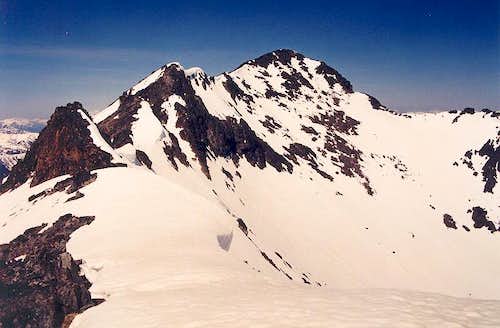 Conditions in June
During mid and late summer the upper mountain will be dry above the tarn, but early in spring there will be some snow on the route and possibly cornices along the ridge. If you plan to climb in summer, make sure to carry a lot of water.

This route is long despite the overall distance of 10.5 miles round-trip.  Much of the terrain requires slow travel.  Most parties will wish to camp either at the tarn at 6750 feet or in the meadows between Robinson and Beauty Peak. Only the most fit hikers should try to climb Robinson in a single day. 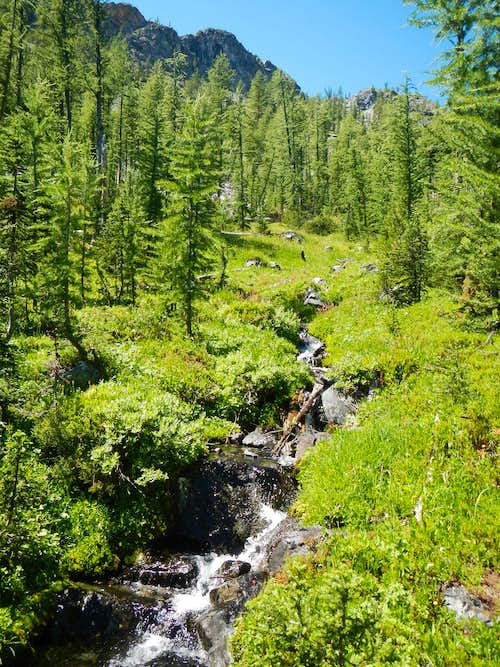 The Upper Stream
Beginning at Robinson Creek trailhead, hike 2.25 miles to the bridge over Beauty Creek. After crossing the bridge, walk another 30 to 40 feet and watch carefully for a boot path ascending from the right side of the trail. Follow this path for another 1.5 miles until it crosses a large stream where you will have to duck under some large bushes and small trees. 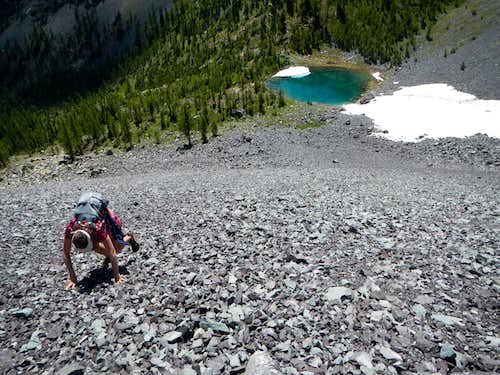 Crappy Scree Slope
On the north side of the stream there will be some steep grassy open slopes. Ascend here off-trail in a westerly direction. If small cliff bands are encountered, they can be avoided by moving to the north where there is more tree cover. But don't venture too far from the stream. 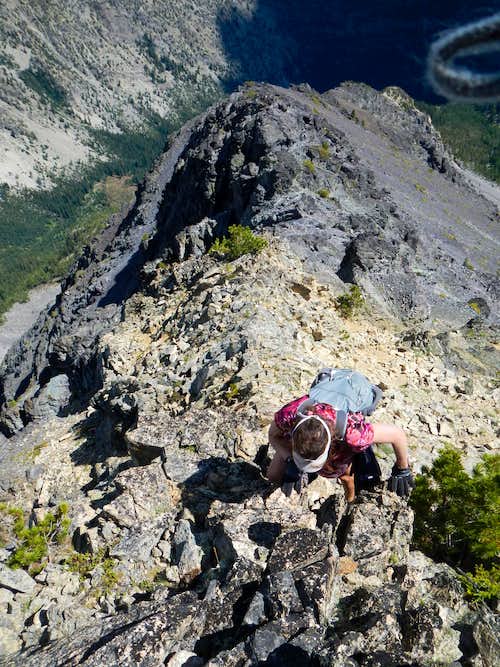 A steep section on the southeast ridge
Around 6000 feet the angle of the slope lessens and small scrub trees are encountered. The easiest way through the trees is to stay close to the stream. Follow the stream to a small tarn in a rocky basin at 6750 feet. This basin is located between two spur ridges. Ascend the loose scree slope (snow covered in early season), north of the tarn, to a gap in the southeast ridge. This part of the route is not much fun. 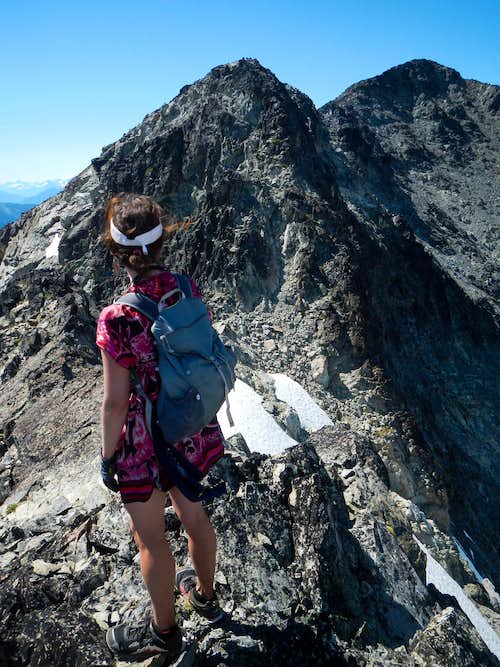 The crux section and the summit at right
From the gap, turn left and ascend more scree and continue to follow the ridge for one mile until you reach the summit. There are several false summits and a few class 3 sections, but most of the ridge is class 2 walking. The crux section is narrow and exposed and comes just before the summit. Some of the smaller points along the ridge can be bypassed on the left (southwest) side. 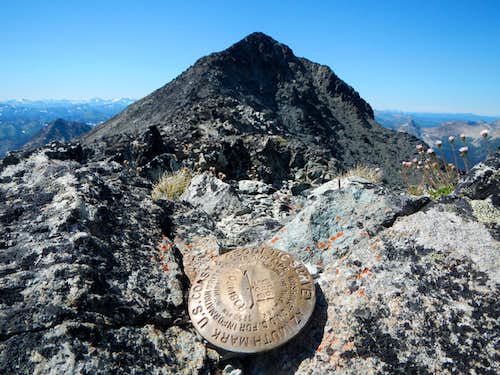 A distant benchmark points toward the summit
As of July 2014, the summit register tube was empty except for a few scraps of paper. If you are planning a trip up there, please bring a new small notepad to leave in the register.

Take Highway 20 to the town of Mazama and turn north on Lost River Road.

After 0.4 miles turn left to stay on Lost River Road.

Turn right at the sign for Robinson Creek trailhead and continue 0.2 miles to the parking area. 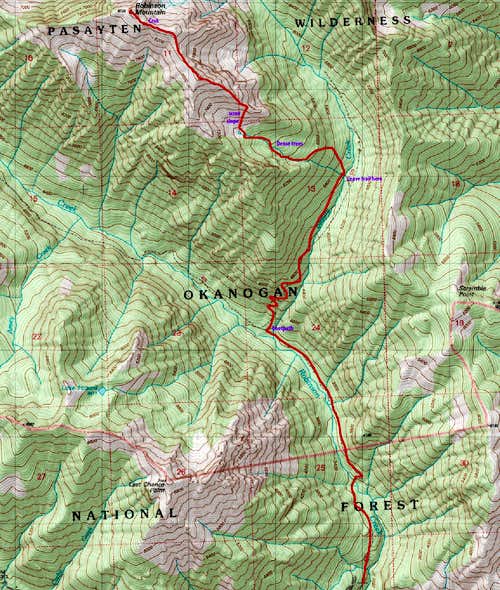 To park at the Robinson Creek trailhead you must have a Northwest Forest Pass.