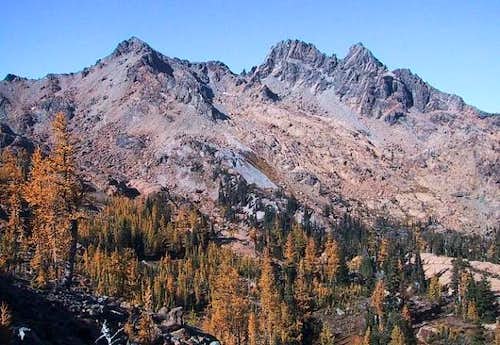 Ingalls Peaks from the southeast.
Left to right are the South, North and East Peaks.
Photo by Dean 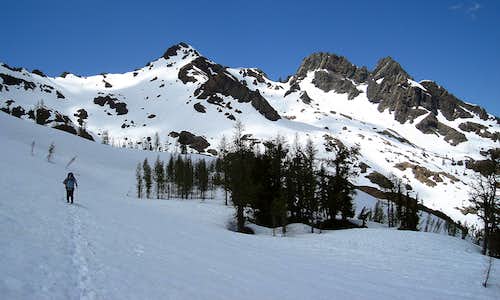 July 2 on a heavy snow year.

Ingalls Peaks are located just west of Mount Stuart in the Stuart Range of the North Cascades. There are three peaks, denoted as South, North, and East Ingalls Peak.

Though not high in elevation and not composed of the same excellent granite as the main peaks in the range, the peaks are an extremely popular destination and some fine climbing is to be found. Because of relatively easy short access and the short routes on the peaks, this area is extremely popular and can often seem overcrowded. On weekends, there will almost certainly be more than one party on the popular routes, especially the South Ridge of the North Peak.

The South Peak can be ascended without difficulty. The North Peak's easiest route is Class 4. The East Peak is the least accessible with its easiest route being easy Class 5.

The main climbing attraction is the classic South Ridge on the North Peak.

The Mountaineers climbed "Ingalls Peak" in August of 1925. It is not clear whether this ascent was of the South or the North Peak. The first ascent of the East Peak was made by Stan Butchart and Gene & Bill Prater in November, 1952.

The following section describing the three peaks includes a list of the routes on each.
It is not intended to be a guide – just a list of possibilities.

Several routes are described in detail with photos in the route pages attached to this page. (Links below and in sidebar.)

Also, numerous other guidebooks describe the South Ridge Route on the North Peak. 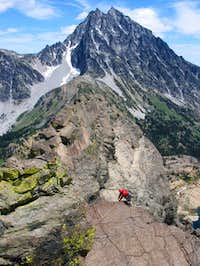 The North Peak is the highest and the most common mountaineering objective of the three summits. The easiest route to the summit is class 4, but the majority of climbers are there to do the classic South Ridge. The rock on the South Ridge is excellent and offers good protection. Its popularity is quite justified.


Routes on the North Peak:

Southwest Face Grade I Class 4. This is the easiest route on the peak and has several variations. There is much loose rock.

South Ridge: Grade II 5.4 to 5.6 depending on variation. This is the classic route in the area with good rock and well worthwhile. Expect company on weekends.

Southeast Face Grade I 5.3. Ascends the prominent shelf on the face to an open book that leads to the East Ridge.

East Ridge Grade II 5.7. Follows the ridge from the notch between the North and East Peaks. Probably the second most popular route in the area. 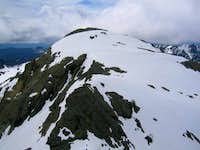 The summit of the East Peak is the least accessible of the three with its easiest route being
Class 5.

An ascent of the East Peak combined with a climb of the East Ridge of the North Peak makes for an enjoyable and interesting traverse. (This can also be done in the reverse direction.)


Routes on the East Peak:

Southwest Face Grade I Easy Class 5. Ascend the face above the notch between the East and North Peaks.

The South Peak is the least interesting of the three from a mountaineering standpoint, but the views from the summit of the other peaks and the surrounding area are excellent and well worth the hike to the summit.

The easiest route is via the north slopes from the col between the North and South Peaks. In the spring with good snow conditions this is little more than a hike up easy snow slopes. Moderate scrambling routes can be found on other slopes of the peak if desired.

Just east of Cle Elum, Washington east of Snoqualmie Pass on Interstate 90, take the Wenatchee exit and follow the signs to Wenatchee on State Route 970. Drive about 5 miles and turn left on the Teanaway River Road. Follow "North Fork Teanaway" signs for 23 miles to the road-end at the trailhead parking lot. 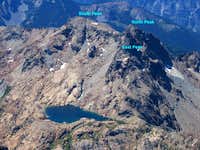 From the pass you will be able to see Ingalls Peaks to the Northwest. Follow the trail to the left as it makes a high traverse around the valley below. There are many campsites here along the trail which should be used since camping is prohibited at the lake. The trail continues to Ingalls Lake, but is left for the ascent to the peaks before the lake.

The peak is located in the Alpine Lakes Wilderness Area and a Northwest Forest Pass is required for parking at the trailhead.

No permits are required for camping, however no camping is allowed at Ingalls Lake. It is recommended that you camp along the trail before reaching the Lake.

This peak is best climbed in the summer months after the rock is snow-free and dryed. Once again be aware that the area is popular with campers and climbers alike. It is best done during the week.

Camping is allowed in the area without permit but it is located in the Alpine Lakes Wilderness Area, so wilderness rules apply. See the Red Tape section for a link with details.

Camping is not allowed at Ingalls Lake. There are designated campsites along the main trail on the way up to the lake.