"Is there anything else in the Alps - including the Julian Alps - which would be able to compare with the mysterious folk tales of Martuljek group? ... Certainly there is no other mountain land like this." Tom Longstaff in his letter to Julius Kugy. 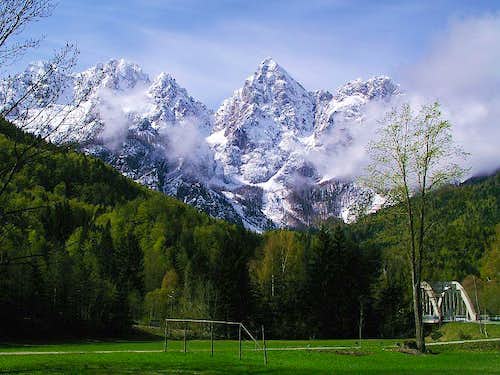 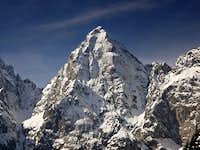 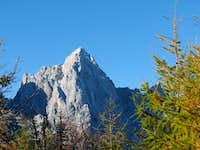 The name Špik is pronounced 'shpik' and is in Slovenian language written with a caron above s.

As a mountain group Martuljek is certainly the most beautiful one in Julian Alps. Exhibited just above the main valley of Sava river it represents an ideal of a mountain harmony. The peaks in Martuljek group are very wild. Julian Alps have been for decades almost entirely explored and on many peaks marked paths lead. But not in Martuljek. Although being the closest to renown tourist resorts, among high peaks only on Špik a marked path leads (and on Škrlatica and Dolkova Špica, which are not in a narrow Martuljek group).

Špik itself is an ideal of a sharp pyramid peak. Although not the highest in the group, it attracts all views. Its 1000 meters tall north wall seems unclimbable. But, as usually in the Julian Alps, the southern face is not so remarkable. This is where the normal route climbs up comfortably, only the last part is rocky and steep.

Being so prominent, in the Špik north wall an important episode of rock climbing history took place. In 1926 the Direct Route (even now a solid UIAA 5th degree) was climbed by a young lady Mira Marko Debelak and her climbing partner Stanko Tominšek - an act which echoed loudly in the alpine world - it resulted in proclaiming of Mira Marko Debelak as the first woman overall to be a member of the prestige Great Britain Alpine Club.

Towards the east, Špik is bordering on the neighbouring Mala Ponca on Špikova škrbina (Špik Notch), which can be reached only by climbing (easy though). On the west, the first neighbour of Špik is the 2-headed summit of Frdamane police. Towards the south, a strong side ridge of Lipnica goes down in the Krnica valley.

As the normal ascent route is not difficult, the first climbers on top were unknown locals. Recorded is however the first ski descent from Špik: Tomaž Jamnik, Peter and Slavo Markič, Nejc Zaplotnik March 12th, 1978. Today the descent is rated III-, one passage S4.

Despite not being the highest summit in Martuljek group, Špik offers a very nice panorama. The view on Martuljek wilderness towards the east and south-east is stunning. Every single tower in the ridge from Rokav to Škrlatica can be seen. The Škrlatica north face is just in front of us. Towards the south, across Krnica valley, two giants of Julian Alps are standing: Razor and Prisojnik. The view towards the west and the north is opened and we can distinguish many peaks of Julian Alps, Carnic Alps, Hohe Tauern and Nockberge. In a clear day also Dachstein can be seen.

Travelling by the main valley of Sava River will bring you to Martuljek village. There, where the main road is crossing the river, is the most beautiful view on the Martuljek group. Martuljek is also a trailhead for some marked (and non-marked) paths into Martuljek group from the north. But they all end beneath high walls and only a few not so hard climbing passages are reserved for expert mountaineers. From the north, only a few peaks of Martuljek group can be reached by not climbing harder than UIAA 1st or 2nd degree.

Špik from the north 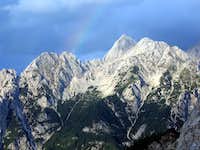 Špik from the west

To climb Špik by a marked path, you must drive in the Sava valley to Kranjska Gora (a well known tourist resort) and there hit the Vršič Pass road (towards the south). After Jasna lake, by a bridge over Pišnica creek, a narrow road turns left into Krnica valley. You can park by the bridge or reach Krnica valley from the Vršič road higher on.

To climb Špik's north wall, you depart from Martuljek village. Two marked paths lead towards the south into the Martuljek National Parc. The first one follows the picturesque creek, the other one goes above it. They join above the lower Martuljek waterfall and only one path goes on towards the alpine meadow. But already after 10 minutes, the path branches again. You turn right following the path to the Bivouac under the Špik (Bivak pod Špikom, 1424 m). The other path goes by the beautiful Upper Martuljek waterfall and reaches the Bivouac No. III (Za Akom, 1340 m), which is important for climbs in other Martuljek walls. 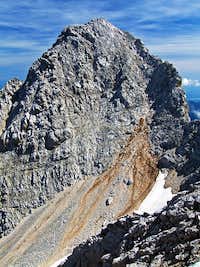 The upper cone from the south, from Lipnica

From the west and south two marked paths ascend to the summit of Špik (see the map). They are both steep, on a few places secured with pegs, but not too difficult.

1. Kačji graben route (west): It starts in Pišnica valley and climbs up a long gully up to the summit rocks. Except the final, rocky part and a few rocky passages in the middle, it can also be done with skis (a demanding ski tour, rated as an alpinistic ski tour: Grade III-, one section S4. T. Jamnik, P. Markič, S. Markič, N. Zaplotnik, March 12th, 1978).

2. Lipnica route (south): The path starts at Koča v Krnici (hut), goes up the dry creek of Gruntovnica, then over screes and around the needle of Gamsova špica, 1955 m, up the ridge (steel ropes) to the summit of Lipnica, 2418 m, a bit down to the notch and by the summit rocks on Špik. 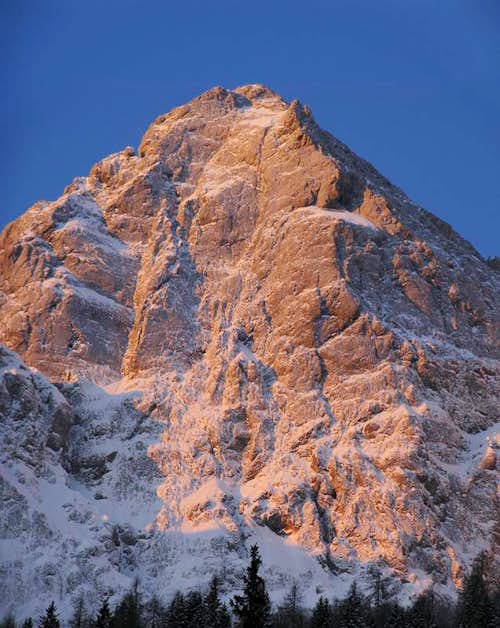 The red numbers by route names are referring to the picture below. The best months are in summer and autumn. In spring (if there is enough snow) you can do a demanding ski tour from just the summit (or a little below it). In winter conditions to climb Špik you need a complete winter climbing equipment. Weather: see here. Even better site is wunderground - here's the direct link to Kredarica station, 2515 m (below the Triglav summit).

In Sava valley there are many huts and hotels. In Kranjska Gora, for example the hotels: Lek, Larix, Kompas and many family hotels. A few general facts for tourists and about camping you can find here.

In old days, in a cave below Široka peč, a giant with the name Iceman (Ledenec, led=ice in Slovenian) was living. Everything was trembling before him, but he only feared of sun and fire. So, he ordered to other giants, his servants, to bring him big boulders, so he can build a mountain, reaching above the clouds. Other giants were afraid of Iceman, so they started to work. And the Iceman was laughing so loudly that the neighbouring summits were collapsing and his servants had enough boulders to bring. But one day other giants had enough. They collected a huge heap of woods before the Iceman's cave and set a big fire. The Iceman died in smoke and started to melt. And still today from the mountains of Martuljek a strong creek is flowing. It has two waterfalls, because also the Iceman had two legs. And the creek will flow as long as the Iceman does not melt completely. Above the creek still today the mountain is rising, reaching with its sharp peak above the clouds. It is called Špik. From the book: Stritar Urška and Andrej: Z otroki v gote (With children on mountains). Ljubljana, Sidarta, 2013.

The path is very exposed to the sun. Therefore bring enough water with you. The last drinkbale water can be found when you start from the Kocha v Krnici just after you exit the forest and enter the rocky path, on the right. The stream is very loud usually and therefore not difficult to find.

Further up, there are two - three additional summits. Gamsova Spica has a nice forrest good for a break. Be very silent there because you can see gams (gams = mountain goat). Also, there is a splendid indentation in that particular summit with a great view.

Still necessary to cross Lipna Spica and Lipnica before the summit pyramid itself.

Also, if you wish to enter excellent walls of Shkrlatica, Rogljica, Rakova Spica, Mala and Velika Ponca you can start from the Kocha v Krnici and thereafter leave the path to Shpik on your left and come to Bivak I which is a good starting pointing for further alpinistic explorations.