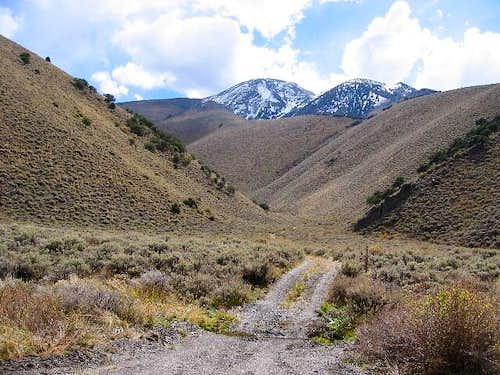 
Surely the person who named this Bunker Hill was a person who understated things. This is really much much more than a hill, this is a full fledged mountain that soars over 11,000 feet high. It is also a sought after mountain since it is one of Nevada's 17 county highpoints and also scores high on prominence coming in as #78 on the top 100 Nevada prominence peak list.

It is a major summit in the Toiyabe Range of Central Nevada, and as mentioned above, the highest point in Lander County, Nevada. If it were closer to a population center, it'd see tons of ascents yearly but due to its remoteness, no more than a dozen people climb it yearly. The log, as of 2002, contained names as far back as the early 90s, and averaged out to sometimes less than 10 visits a year. It is a testament to the grandness of the Toiyabe Range that a peak as massive as Bunker (and it is when you see it) is just one of four highly prominent peaks in the range, the most prominent being Arc Dome to the south. In dry conditions this is a fun, non-technical day hike amid high open sage slopes. There is no trail, but cross country navigation is very easy - a great 'beginner' peak for cross-country landform navigation.

From Reno, it is about a 170 mile drive along US-50 to get to the community of Austin, tucked into a canyon on the Toiyabe Range's west slopes. From Austin, drive 14 miles east up and over the passes to NV-376. Turn right (south) onto NV-376 and follow it about another 14 miles to the community of Kingston. Although there are many roads in this area, stay on the main paved local roads into Kingston and drive past the general store and into the mountains (this will be obvious when you are there). The road turns to good dirt. Follow this dirt road about another 9 miles up to a pass about 4 air-miles north of the summit. The last little bit may be too steep and rocky for most passenger vehicles. Snow lingers into June. Have maps handy.

From Ely it is about 140 miles or so to Austin but you don't need to go into Austin, just take the Nev. 376 turnoff and go about 14 miles to the turnoff at Kingston.  There is  gas in Eureka or if coming south from I-80, gas up in Battle Mountain, 90 miles away from Austin.  From Las Vegas, head up through Tonopah and turn off from Nev 376 to the Kingston area as mentioned above.  Roughly 90 miles from Tonopah to that turnoff but there is gas in Round Mountain and Carvers.

Note on getting to Austin itself: if you like solitude and stark desert beauty, this road has both. There are very few towns along the way. If coming from Fallon, gas up there since it is over 100 miles to Austin from there

No permits are required. No private property is crossed. The Forest Service in Austin (west side of town, signed) appreciates if you stop in before or after to say hi and to offer reports on conditions. They have an optional log that can be signed.


When To Climb / Weather 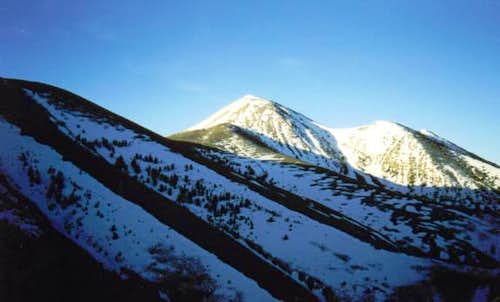 
Best time is late June to about late September. Snow lingers until June and can make some sections where crampons, ice axe and common sense would be handy. Thunderstorms can make a visit to the summit a bit dicey so pay attention to the weather and plan accordingly. I went in mid-May of a light snow year (2002) but even then still had to contend with some icy bits and some slushy steep sections near the top. We also barely got off the mountain before a big thunderstorm hit it.

Low-impact camping is allowed. Some pullouts are found along the dirt road nearing the trailhead - I found some secluded spots in an area of reeds that had obviously been used in the past for camping.

There are several small campgrounds in the Austin area and the closest to the trailhead is: Kingston Campground.

Austin has a few cheap motels and groceries - limited, but reasonable. For the size of the town, it's pretty much the only sizable place for hundreds of square miles. Kingston is barely a blip - a few homes, some prefab, and no real business district. 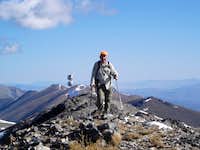 Me at the summit

The Forest Service in Austin may have updated info as provided by hikers. Due to the small numbers who climb it you may have to judge for yourself.

The standard hiking route is from a saddle at 8,660 feet, located about 4 air-miles north of the summit. 4wd is not needed in normal conditions but the last mile or so of road is rocky and steep enough to scare off the little passenger vehicles. In that case, park early and hoof it from where you park! Those with good 4wd vehicles can drive up another 700 vertical feet to a knob at 9,335 feet just south of the saddle.

In any case, the route generally traverses south along the west-facing slopes of the main range before reaching a significant saddle at about 10,100 feet due north of the summit. The slopes are mostly open, sage-covered with few stands of trees. Game trails help. Route finding is easy. If there is snow, beware that it can be icy in the mornings and that crampons may be needed (I needed them).

From the saddle, hike directly up the talus slopes. At first, vegetation and tufty grass makes for easy stepping. Soon, the slope steepens for about 200 feet. The rocks can be loose; step carefully. Finally, the slope moderates, and the first of a series of three summit bumps appears. Find a decent use-trail that skirts these subsidiary humps and hike to the furthest of the three bumps, the true summit of Bunker Hill.

Options: a few canyons that jut off the main ridge allow for a variation of ascent or descent options. Some have very sketchy trails and may be brushy. However, if driving to the main saddle is not possible, consider hiking up one of these side canyones, and achieving the main ridge from there. Suggestion: do not attack Bunker from directly below. This route looks way too steep and messy. For the record, I descended via one of these side ridges and canyons out to the main road with little difficulty, other than having to battle some brush here and there.

There is a developed campground, open during summer and early fall months only, in Kingston canyon just below Groves lake( which has some fair fishing). Also there are several areas along the creek that camping is allowed.

as of july 12, 2005, there is signage approx. 1/2 mile beyond lake for Bunker Hill Campground. it has a relatively new brick toilet house. there are some primitive sites along the road towards the peak. no tables, fire rings, etc. since i didn't check back in w/ the rangers, i am unaware of their future development plans.

No gas in Cold Springs

All that remains of the gas station at Cold Springs is a burned out gas pump. The nearest gas is in Austin, NV. There are two stations, both with prices at about what you'll find way down the road in Fallon. As always, while in Nevada, plan ahead & watch that gas gauge!