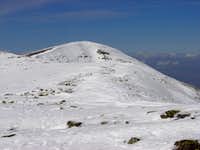 Moncayo from Morca
One of the most popular mountain of Spain, the Moncayo is the highest point of the Sierra del Moncayo and the Sistema Ibérico, a lot of ranges of the north of the country that spreads over the provinces of Burgos, Soria, La Rioja and Zaragoza. Others ranges of this system: Sierra de la Demanda, Picos de Urbión,... This solitary mountain has a good time for his privileged and isolated position of a few unique views, in the clear days, which they include from the Pyrenees in the north up to the Guadarrama in the south. The mount dominates and separates the Castilian plateau of the depression of the river Ebro and presents step by step a gradation bio-climatic very diverse: from remains of glaciars in the summit north-east (circus of the Cucharón, San Gaudioso and Morca), up to leafy forests of beech, holly-oak, oak, pine and juniper in his hillsides. The Dehesa del Moncayo is a natural space protected from 1978 with more than 1.388 hectares. More info add by Diego Sahagún. May 24, 2004: In 1998 the new PORN (Plan de Ordenación de los Recursos Naturales) of Comarca (region) del Moncayo was past, increasing the area of Parque Natural to 9.848 Ha / 24,335 acres), wich includes: Dehesa del Moncayo, an important zone of the oakwood known as Monte de la Mata, pasture and altitude brushwoods (Collado de Bellido, Collado del Muerto, Muela del Horcajuelo), and the limestone areas (Muelas del Morrón, Plana de Valdeascones and Peñas de Herrera. A protection ring was also approved with a surface of 24.396 Ha / 60,284 acres and Refugio de Fauna Silvestre was created in the area of vultures called El Val (140 Ha / 346 acres). In the summit there is a nice statue of the Virgin of Pilar, the patron virgin of the region of Aragon, in which one finds Zaragoza, and patron virgin of the Spanishness (Spain and iberoamérica). This image is of great devotion and many people attract. Magic and mysterious watchtower, this singular mountain has been surrounded with a legendary halo. Writers of the height of Antonio Machado or Gustavo Adolfo Bécquer remained impressed by the secret magic of the natural environments that coexist in the range of the Moncayo and it was in these places of the System lbérico where they placed good part of his magnificent literary works. Under this mount ,and in nearby Veruela's Monastery, Becquer wrote his famous Rimas y Leyendas ("verses and legends") while he was trying to recover of the tuberculosis, which would end up by killing it, in the pure airs of the Moncayo. Traditionally in Zaragoza when it blows of a cold air of the west it is called a " Wind of the Moncayo" Name: derived from "Mons Caunus" (in latin of roman civilization) or "Monte Cano" (White Mount) because to have always the first snow of the season in her top. Other summits: really the Moncayo is a large range and in the principal ridge it can identificated some summits: easternest is peak Lobera (2226m), eastern is Morca (2280m), central is San Juan (2283m, near of the col of normal route), western is peak San Miguel (2316m, the highest point and the real summit of Moncayo), and westernest is Peña Negrilla (2118m) with the litte Punta Norte (2065m). 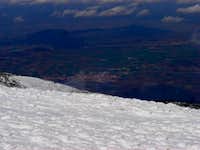 Agreda
Normal route is from the Sanctuary of Virgin of Moncayo. Approach: *From Zaragoza: Road N232 to Tarazona. *From Pamplona: Highway A15 to Tudela (pay) or N121+N232. From Tudela take N121 to Tarazona. *From Madrid: Take N-I to the north in direction to Burgos. Before Burgos and Aranda de Duero, take direction to N-121 to Burgo de Osma and N-122 to Soria. Follow the N-122 to Agreda and Tarazona. From Tarazona to Sanctuary: take to the south for local roads to San Martin de la Virgen del Moncayo. The road follow to the former sanatorium of Agramonte (and the center of natural interpretation of park) where the signal indicated to the right: sanctuary 12 km. Initially for road and then for track up to the parking close to the sanctuary. Other routes: Agreda or Cueva de Agreda (Soria) across Collado Castilla, Collado Bellido across Peña Lobera from Sanctuary, Collado Castilla from Sanctuary, Collado de Morca from Cueva de Agreda, village of Litago... really a lot of routes but except the people of Soria that use the route of Collado Castilla (east of the summit) the 99% of the persons follow the normal route from sanctuary. I'll write another route someday but I don't know if it's interesting for SP, I prefer the walk of some routes before it. The normal route of Moncayo is really the only route for many mountaineers and it's not true, but probably the others routes are more confuses (not signals, map very necessary). 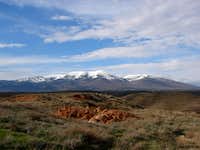 Range of Moncayo
No permits required but the mountain is in the Natural Park of the Dehesa del Moncayo. Rules: (Author: Diego Sahagún.Date: May 24, 2004). According to the PORN (Plan de Ordenación de los Recursos Naturales). Decreto 73/1998, 31 March, Gobierno de Aragón. - PRUG (Plan Rector de Uso y Gestión) will establish the usage restrictions of the forest trails and roads in the Park. - The entry in non-motor vehicles or on foot, and the introduction of non-stock usable tame or non-hunting usable animals can be regulated in the PRUG. - The only permited recreative or sport activity in the Park is hiking. - It is specifically forbidden: car, moto or bike races; low flights wich could be birds' disturbing; rock climbing and similar activities in non authorized spots. - The new tourist, recreative or sport uses will be submit to Dirección General del Medio Natural's authorization. - It's not allowed to camp outside Campamento Fernando el Católico, Aula de la Naturaleza de Añón and the camp or bivy areas wich PRUG stablishes. More information in Centro de Interpretación del Parque Natural, placed in Agramonte (Zaragoza). Opens all days from 15 June to 14 September and in weekends and holydays the rest of the year. Tel: 976 19 21 25. In summer the row of people who climb can make desist to the most authentic mountaineers that look for the tranquility and loneliness in the mountains.

All the year. In winter is a good climb with crampons and ice-axe for mountaineers. In summer the view is more clear (but there are more people). A good season is the beginning of spring with snow generally and not many people. In this season of the year there is the one who climb with skis in the haversack to descend from the summit.

Bar/Restaurant in the Sanctuary. No camping or huts. Housing: In the nearby villages of Tarazona, Agreda or Tudela. They are big populations with abundance of hotels, lodgings, bars, restaurants... it is not necessary to recommend any especially since there is no generally problem of housing.

The fog is frequent many days of the year though it's does not suppose a great risk though conceals the general view. I.N.M.Spain Meteored Journal ABC