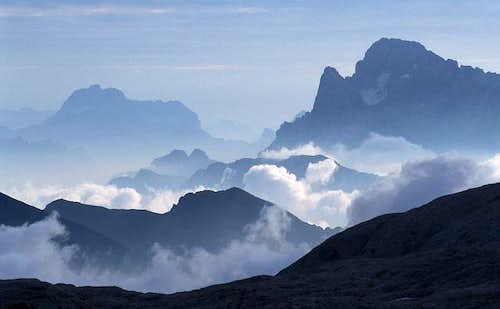 a Dream Mountain of the Dolomites

Monte Civetta stands in the first line of the wildest Dolomites mountains - mainly because of it's huge north west face that is a symbol of the Dolomites and an eyecatcher in the Agordino valley.
Less impressive and less known is the east side of the mountain looking down into the Zoldo valley. But this is the side for the normal climbers. There is a little terrace at about 2900 m. Here Rifugio Torrani is situated so you have the oppurtunity to sleep high at the mountain.
Monte Civetta is the climax of a long ridge that carries several minor summits: SW of Monte Civetta is Piccolo Civetta; NE are Punta Tissi (2992 m) and Punta Civetta (2920 m).
Civetta is also the climax of Civetta mountain group theat exeeds between the pass roads over Forcella Staulanza and Passo Duran. There are some more interesting mountains and endless climbing possibilities - so have a look at the Civetta group page. 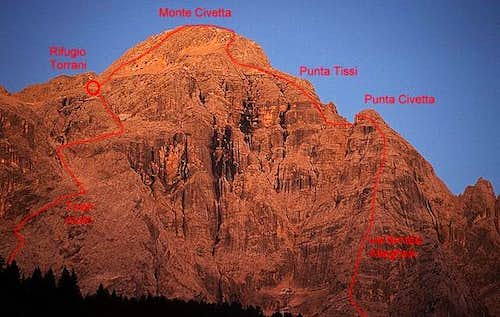 Three routes can be done by normal climbers:

- Sentiero Tivan: this is the route of the first ascent. Marked route with some cables and some easy scrambling, but definetely no hiking! Danger of rockfall. Nowerdays this route is mostly used for the descent.

- Via ferrata Alleghesi: This is the most popular route - a cable route, not extreme but not easy. It follows a pillar to the side-summit of Punta Civetta (2920 m), then along the main ridge to the main summit. Easier parts of the pillar (UIAA II) are not fixed. Sometimes crowded

- Via ferrata Tissi: this is a difficult ferrata that leads from the south to the plateau with Rifugio Torrani. It concentrates on a 300 m high, almost upright step. Some danger of rockfall.

All routes require good - dry - conditions and stable weather. In any case one should avoid getting into a thunderstorm

was probably done by the hunter Simeone di Silvestro in 1855 on the Tivan route. On May 31st 1867 he led the englishman Francis Ford Tuckett and his swiss guides Melchior and Jakob Anderegg to the summit again.

the biggest rockface of the Dolomites

Civetta north west face is probably the biggest rock face of the Dolomites, with a maximum height of 1200 m and a length of 3 km. The first direct ascent was done by Gustav Lettenbauer and Emil Solleder in 1925. This is nowerdays considered as the first climb in the entire alps in UIAA grade VI.

In the 1930ies some other routes in grade VI here and on other summits of Civetta group were opened, so climber and author Domenico Rudatis called the area as "kingdom of the 6th grade". Developping did not stop decades ago - there are also some modern climbing routes here.

Routes of the NW face are:

1. to Monte Civetta or Piccolo Civetta:

Of course the face claimed victims among the alpinists - one of the most famous was german climber and poet Leo Maduschka in 1932.

a) Rifugio Torrani (2984 m) - 250 m below the summit. Reaching the hut is part of the climb, there is no easy access. If the weather is stable staying the night there is a great experience 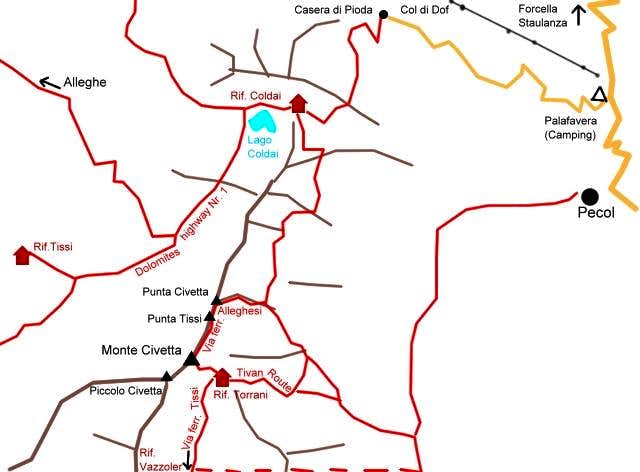 For hikers Civetta is a mountain to admire, not to climb. Easy but very impressive is the traverse along the NW face from Rif. Coldai to Rif. Tissi and Rif. Vazzoler. This is also part of the Alta Via Nr. 1, one of the most popular long hiking routes of the Dolomites

July to September, as long as there is no snow.
The normal route has already been done with ski - but this is only something for local experts...

no normal goal for a winter ascent

Best campsite on the east side is Camping Palafavera. The Dolomites are a holiday area so you can find many hotels or bed&breakfasts in the villages of Zoldo Alto or Alleghe.

At the mountain normally the huts are used. But camping is also allowed and some climbers do it to have a shorter approach to their routes.

The normal routes require gear for a via ferrata. For the more difficult climbing routes you will know what you need. I hope that routes are posted in the future - there the necessary gear should be mentioned.