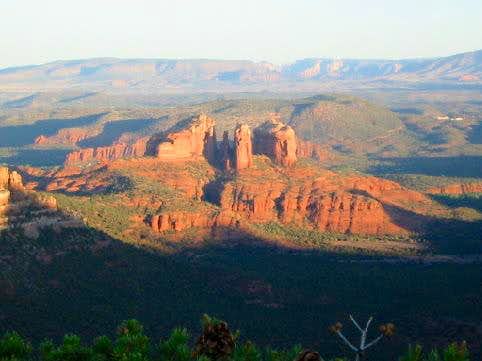 The Red Rocks Sedona area has probably more climbs than any other city in the nation. This place could easily be a paradise for rock climbers. But they are the worst climbs in America. The rock is all crumbly sandstone, a rock climber’s nightmare. Cathedral Rock is not exempt from this. Just as beautiful they are, they are dangerous. Cathedral Rock sticks up just over 900 feet from Oak Creek. The first 600 feet of the climb is on a trail with minimal climbing. The last 360 feet is up crumbly sandstone. This is some of the worst rock to climb on in the nation. There have been those that attempted these spires and have died trying. There are many climbs that can be done on these rocks, and none of them are safe. There are many people that climb up to the rocks, but only few actually attempt to climb them. These rocks are not recommended to be climbed. Even if you do the first 600 feet, the hike is worth it and the views are breathtaking. Hiking distance one way is only 0.7 miles.

Summer is not recommended. It’s too hot. Autumn-Spring is the best time. These rocks will occasionally get snow on them in the winter.

There is none in the direct area. The closest campsites are in Oak Creek Canyon. There is a fee to camp.