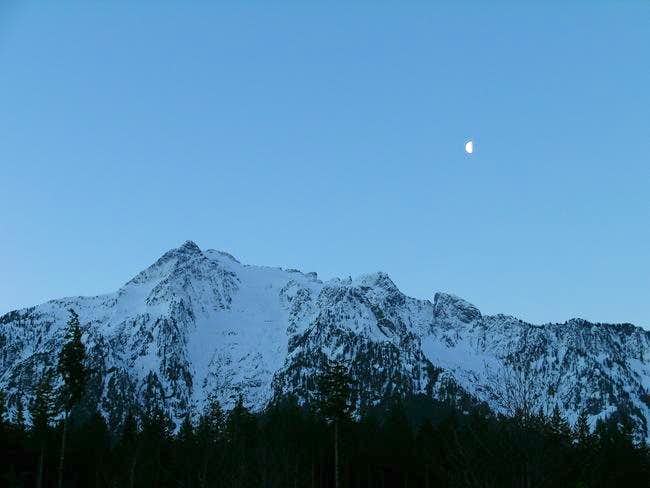 Whitehorse Mountain has it all: The mountain itself is spectacularly beautiful, especially from the little town of Darrington at it's base: The views from the summit are world class in all directions; the hike in and the climb are difficult enough to be forever memorable; and the solitude, especially considering this mountain's proximity to habitation, is remarkable. On this last note: During my five trips up Whitehorse's slopes over the past few years I've yet to encounter a single other hiker or climber save a herd of mountain goats in one of the meadows! As if that isn't enough, there are stories of a mad Bulgarian hermit that lived for years in a campsite on the mountain's lower slopes and there was even a TV movie with scenes filmed on the summit icecap. (see below: Misc.) Other accounts vary slightly but I measured the round trip as a relatively short 10.6 miles, but in this distance, starting at the 912 foot trailhead you will gain over 5,900 feet to the summit and another approx 1000 feet due to several ups and downs in the middle portion of the trail for nearly a 7,000 foot total gain.

Note: The USGS map for the area misplaces the name several hundred yards to the NE and doesn't even place an elevation on the location of the true summit. Nevertheless, the contour lines on the map are correct and in the right place to indicate the actual summit. See the Topozone link on this page.

From I-5, 40 miles north of Seattle, take the Arlington/Darrington exit #208. Head east on Hwy 530 approx. 26 miles to Mine Rd. (aka 387th Ave. N.E.) turning right on the paved road toward the mountain. After 5/10 mile continue on the now gravel road taking two left forks. (See update below) This road becomes increasingly rougher as it goes up the hill but should be easily navigable with care by most two-wheel drive vehicles. At 1.8 miles from the highway the road levels out and there's room for a half dozen cars or so at the trailhead. When the Trail Pass system first went into effect this trailhead was posted but it no longer is as of this writing (7/28/04). This is forest trail #953 also known as the Niederprum trail and also as the Whitehorse Mountain trail.

Also, this road is a bit overgrown in a couple of places and will scratch your car up some.

4/7/2008 road update: The bridge over Moose Creek 1/2 mile south of hwy 530 has been closed and barricaded due to "unsafe" conditions. You can still walk across. This will add 2.6 miles RT and an extra 400 vertical feet to your already epic quest. Enjoy!

This trail is truly in another league from all the trials I've run/hiked/jogged or climbed over the years. Above about the 1.1 mile mark there appears never to have been an actual trail cut into the slope but rather a path of least resistance up the mountain and across the steep meadows. The result is some ankle straining traverses and an exceptionally tough climb. Full description under “routes.”

The trail enters the wilderness area about a half mile from the trailhead so the usual rules apply. Currently, no parking passes or fees are required.

Locals tell me that winter ascents can be made directly up the Wellman basin on the north face of the mountain once the snow is deep enough to cover the brush and small trees. The adjacent basin, Snow Gulch is also sometimes used for winter ascents/descents and is at least as steep as the Wellman route. These are shorter routes but with an average slope of over 50 degrees it looks pretty grueling. (And that's degrees, not percent!) If that's your thing, though, enjoy!

mpaul_hansen has contributed the following: "The CAG - Cascade Alpine Guide - warns rightly of avalanche danger. A 1970 spring-time ascent could have been tragic. A 0.4 meter slab cut loose after it was traversed [when ascending]. When descending the slide path was noted and all concluded; anyone on that slope during the slide would have been hurled over the lower cliff area."

The usual wilderness area rules must be observed in the area. Find out about any fire season closures, etc., by contacting the Darrington Ranger station at 360-436-1155. See section below, "Accommodations" for motel camping info.

Interestingly, David Janssen, (TV series: The Fugitive) starred in a TV movie filmed on the upper slopes of Whitehorse in 1980 called High Ice. Some accounts rate this as "forgettable" but others such as IMDB.com rate it as "6.0" meaning, arguably, not too bad. I've yet to find a copy to view so I personally can't say. In any event, at the worst, it should be good for some summit shots and views of the general area.

According to Fred Beckey in his "Cascade Alpine Guide" book 2 ("The Mountaineers Books, third edition, 2003), the mountain was named after an incident when an early pioneer's horse ran away. To quote Beckey, pg. 129: "During the search, a neighbor noted the image of a horse in the form of a snowpatch on the mountain, and pointed out in jest, 'there it is above us.'" Some locals I've spoken to claim they've seen the entire mountain resemble an image of a horse during certain snow conditions but I've yet to see the resemblance. Regardless, it's a good name for a beautiful mountain. Beckey also states that first ascent was by Nels Bruseth in 1909.

The Darrington Motor Inn is the only game in town and it's a surprisingly good deal. The water from the tap is very cold and good enough to bottle and sell. The water pressure is incredible through unrestricted showerheads that you will very much appreciate after your trek up and down this most formidable mountain. Room have good beds, mini fridge and 36 channel cable TV. Call for reservations at 360-436-1776. First floor rooms have sliding glass doors and small decks where you get excellent views of the mountain. This is the only motel in town so call ahead. If there's a forest fire or anything that would bring some extra population to the area you will be out-of-luck. (Not that I haven't had to sleep in the car a few times myself!) There are several motels along the freeway as well.
There is an IGA store next door to the motel so basic provisions can be had. For those desiring some local flavor, there is Skidder's Restaurant & Lounge, a half-mile south of the motel at 1015 Darrington St. and there's the Red Top Tavern just across the street to the NW of the lounge. There's a small restaurant about a mile west of town on Hwy 530 and one gas station a couple of blocks from the motel with a small convenience store. There's also a gas station at the junction of Hwy 530 and Mine Rd.

Believe a scene of Whitehorse Mtn from the US film "War Games" was shown, but gave film viewers the false impression that the rugged landscape was from Colorado, USA, not the N. Cascades of Washington, USA.

The CAG - Cascade Alpine Guide - warns rightly of avalanche danger. A 1970 spring-time ascent could have been tragic. A 0.4 meter slab cut loose after it was traversed [when ascending]. When descending the slide path was noted and all concluded; anyone on that slope during the slide would have been hurled over the lower cliff area.

The movie scene showing Whitehorse Mtn in the background was very brief. The foreground shot was of a main character in the movie, making a call from a phone booth. The phone booth, now removed, was several miles west of Darrington, WA., on the south side of the paved highway - SR 530.

If more information about the movie [depicited a false warning at NORAD of a nuclear attack ] is verified; will certainly forward this via another post.

Just a note that the Bulgarian hermit of legend was arrested back around 1998 for a high number of burglaries around southwest Darrington area. His name was Mincio Vasilev Donciev and he was a convicted murderer who had also tried to kill his ex-girlfriend in King County. Here's a decent article about the situation and his capture. http://klipsun.wwu.edu/archives/sept98/Bulgarian.html Sadly the police dog that bit him ended up loosing his job because of it. Unjustly in my opinion because, from what I have been told, Donciev had a pistol at the time of his capture and was actively fighting with the arresting Deputies. Off topic from climbing but part of the history.

Almost all the links on this page are dead.

I was able to find what I think is the working current link, for the broken link in the "External Links" section: http://www.mountainwerks.org/cma/2004/whitehorseg.html

Thanks for the note. I fixed a few things. dn