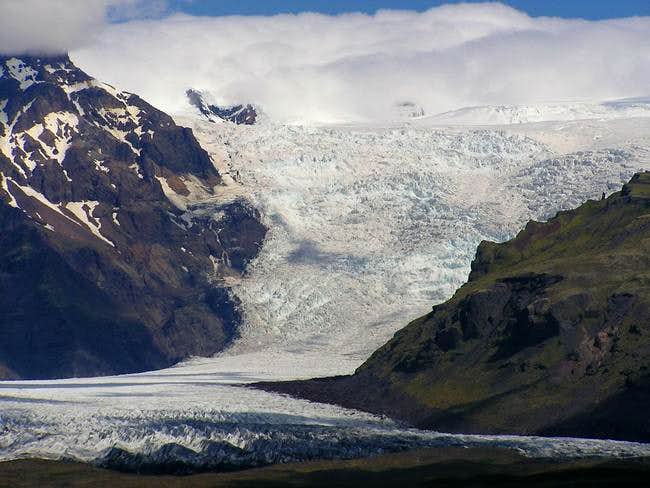 Hvannadalshnukur (pronounced KWANNA-dalsh-nyooker) is the highest peak in Iceland at 2110 meters. Prior to 2005, it had been stated to be 2119 but an official survey in 2005 revised this. It is actually the highest point on a crater rim of the volcano, Oræfajökull, located in extreme southeast Iceland only a few kilometers from the Atlantic Ocean. The volcano itself is massive, the largest post-glacial volcano in Iceland and, according to my research, only exceeded in mass by Etna as far as European volcanoes go. But this fact pales in comparison when you consider that Oræfajökull is but a small part of the massive glacier, Vatnajökull.

Vatnajökull (meaning Lake Glacier, named after sub-glacial lakes under its center) is the largest glacier in Iceland and the largest glacial ice cap in Europe. At approximately 8500 square kilometers, it is larger than all of continental Europe's glaciers put together. To give American's some idea of the size of this chunk of ice, it is a bit larger than the state of Connecticut. This glacier takes up 1/12 of the country of Iceland and contains approximately 3300 cubic kilometers of ice. The average thickness of the glacier is 400 meters with the greatest thickness being over 1100 meters. It is interesting that scientists believe it was not formed during the last great Ice Age but during a cold period about 2500 years ago.

Vatnajökull has had five recorded eruptions with the latest three coming in 1996, 1998 and most recently in 2004.

The 1996 eruption caused large floods taking out bridges and cutting off eastern and western Iceland from each other for a time. Oræfajökull has had two recorded eruptions in 1362 and 1727. The 1362 eruption was the greatest tephra fall in Icelandic history and caused the area's abandonment (the name means something like "glacier wasteland").

Hvannadalshnukur sits adjacent to Skaftafell National Park. Created in 1967, it covers 1700 square kilometers and lies on the west side of the peak between three of Vatnajökull's 46 outlet glaciers (Skeiðararjökull to the west, Morsarjökull to the north and Skaftafellsjökull to the east). To the immediate north of Skaftafell is a finger of land with amazing hikes and sites (see section below for details or click on the link in this paragraph). Skaftafell itself has worthy climbs of both technical rock and glacier and is an oasis of color and life in an area of southeastern Iceland that is so close to a massive drainage of the giant glacier where a huge amount of flat stream-filled sand dominates the coast. Skaftafell enjoys better weather and more sunshine hours than anywhere else in southeastern Iceland as it is protected from wind and rain by the volcano. Trust me when I say I spent several days in the park getting sunburnt while clouds and 60 mph winds whipped up on the mountain.

The climb to the highest point in Iceland is not technically challenging but as you would imagine there are a large number of crevasses to deal with when you have glaciers that come down to sea level. There are two main routes and they both have about 6600 feet of elevation gain and take a long day to accomplish. Both start on the western flank of the mountain. The Hryggjaleið route from the Virkisjökull glacier is used only until about mid-July and is then closed due to crevasses and an icy surface. The more-standard Sandfellsleið route starts a bit further south and is open most of the year. The latter route takes about 12 hours (8 hours up, 4 down). Even though it is not particularly technically challenging, please don't underestimate a climb of Hvannadalshnukur. Weather on the glacier can be particularly bad and completely opposite of what is happening below in the Park. Crevasses abound and guided climbs are recommended unless you have an experienced team in glacier climbing.

The first ascent of Hvannadalshnukur was on August 17, 1891 when a British man named Frederick W. W. Howell was guided up by locals Pall Jonsson and Thorlakur Thorlaksson. 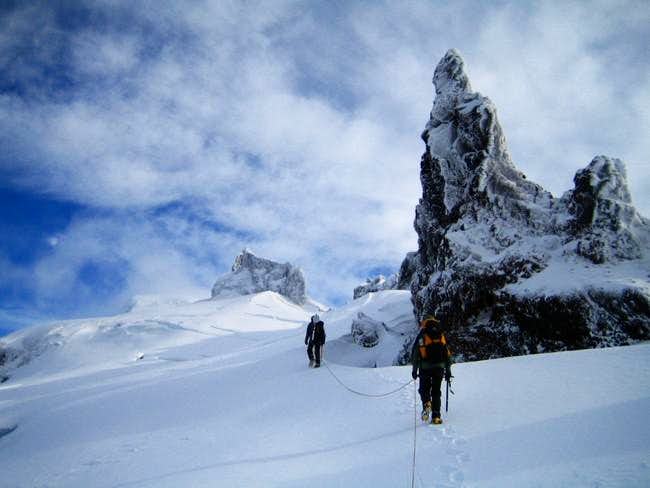 Once you get your supplies, head out the parking deck and turn right (north) and exit out onto the large east/west road on the north side of the mall called Miklabraut. Take the road east and follow signs for Highway 1 (also known as the Ring Road).

Take Highway 1about 320 kilometers east to Skaftafell National Park. Turn left at the sign for the Park and go about 2 kms. to the Visitor Center and Campground.

There is no red tape and no permits are required. If you are not going on a guided climb, it might be a good idea to check in with Icelandic Mountain Guides at their tent in the campground in Skaftafell. They can give you up to date weather reports and route information. If they are not in their tent, (you can't miss it in the campground) they are usually back there by about dinnertime. 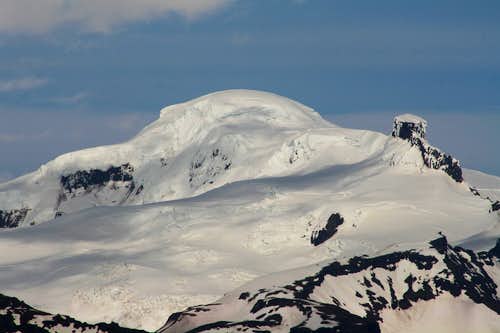 May to September with July and August being the most popular and best weather climbing months.

The closest campground around is in Skaftafell National Park. Click here for camping info and travel facts. Cost is about $8 per day and you do not need a reservation. Excellent services including showers, stove fuel, food, etc.

Also, nearby is Svinafell Campground

It used to be that the only guides on Hvannadalshnukur were Icelandic Mountain Guides. Unless you have an experienced team in glacier travel, it's recommended to use a guide service. The glacier is riddled with hidden crevasses and even the guides say they won't go up alone there. Icelandic Mountain Guides go up almost every day as long as there are at least 2 clients. Cost is about 23,900 kronur currently (currently about $190). If you really want to go up privately, they will accomodate you but they have to make up their losses for the day and the charge is approximately 76,000 kronur (about $605).

Pros of using this guide service is that they are very good guides and know the mountain extremely well, especially in finding hidden crevasses.

Cons are that you could get put on a 60 m. rope with 7 other people and depending on their skill levels and endurance, your climb could be cut short. It's a crapshoot but the guides tell me they summit about 85% of the time.

Other guide services that are now providing climbs are (and I have no experience with these while I did use the one listed above as I was solo in Iceland at the time):

Hikes within Skaftafell include trails to Svartifoss, a recreated ancient farm called Sel, a forest of aspen and pines called Lanbhagi as well as many glacier hikes.

Probably my favorite side attraction in this area is Jokulsarlon, a lake by the ocean that is at the base of the Vatnajökull, about an hour east of Skaftafell on the Ring Road. No matter what books or website say, the glacier is not retreating from warming temperatures, the salt water comes in on the tides and melts away the glacier from below. This causes the glacier to calve off icebergs which float around in this lake until they are small enough to be carried out to sea. Boat trips around the lake can be taken right off the highway and cost about $27 for about an hour of a tour.

Company that does guided tours around Iceland

Other Guiding Company offering trips to Hvannadalshnukur: Glacier Guides (www.glacierguides.is) They are located in the national park (the strawbale house with the turf roof at the edge of the visitor center parking lot) They offer trips to the highest summit as well as other peaks in the area. tel. +354-659-7000 www.glacierguides.is info@glacierguides.is

Thanks for updating me with that. I appreciate it.

Is there a cotation for this Ice or Ice/Rock course (F/PD/AD) ? Is this a +2000m height difference course ?

There are more than one option for camping nearby, including Svinafell which has tent area as well as guest huts with bunk beds. Ski touring is also an option. Thanks for the write up Brian.