Mount Chapin is a part of the trilogy which makes up the southern part of the Mummy Range. It is the smallest of the three including Mount Chiquita (13,069ft.) and Ypsilon Mountain , (13,514ft.). Located within the northern confines of Rocky Mountain National Park , this mountain is another on the majestic list of peaks that dot the park. This peak is usually climbed with the other two on a nice day of bagging three summits on one trip. This trio of peaks may seem like an easy loop to accomplish, but as with any summit attempt in the Rockies, these peaks are no slouch. A number of people have disappeared and lost there lives in the Mummy Range, so do prepare before heading out. Know the terrain, know the weather, know not just your physical limits, but also that of your partners, and lastly know where you're going.

Mt. Chapin is similar to the other peaks of the Mummy Range in that it has a steep south face with a gradually building northwestern side. The southern face is comprised of sheer cliffs and ledges which drop nearly 2,500ft. to Fall River below. Views from this summit extend for miles in all directions. To the northwest you can see the Medicine Bow Range of Wyoming. South of the summit is the beautiful Longs Peak Massif with many more beautiful peaks all around including Trail Ridge with Sundance Mountain . 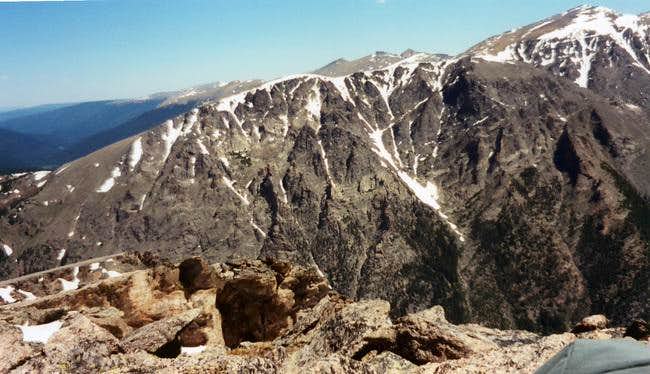 From Denver:
Route 36 is the best way of entry to Rocky Mountain National Park from Denver. Route 36 leaves Interstate 70 and 270 from downtown Denver just northwest of Aurora.
Route 36 access from Denver International Airport:
In the airport follow the only road out which is Pena Boulevard. You will head west for four miles and then the road will turn south for about three miles where you will meet I-70. Get onto I-70 west and continue through northern Denver until you reach I-270 where you will need to exit. I-270 will merge momentarily with I-76 after about a mile. A mile after the merge you will reach the exit for Route 25. Exit here for the north and proceed on this road to the first exit, which will be for Route 36 north. Once on Route 36 follow it the entire way to Estes Park.
From inside Rocky Mountain National Park:
Take Route 34 out of Estes Park to the junction with the Fall River Road. From here you'll head down a hill and you'll have the trilogy of peaks in sight. At the bottom of the hill you'll meet Old Fall River Road, which is one way and heads up to Trail Ridge. Continue up this road around Chapin to Fall River Pass which is the trailhead.

For climbing this peak, you must have your pass for Rocky Mountain National Park. The only seasonal closures would be due to snow across the Trail Ridge or Fall River Roads. If closed, all climbers should have snow gear and plenty of extras for the long hike. For wildlife conservation, the park asks that you do not approach any animals. Check the ranger station for all other national park restrictions that apply. Also, follow the “Leave No Trace” program and you'll be fine.

The best time of year for climbing this peak is from June to September. Snow can be and probably will be encountered even in some parts of those months, but snow is definite outside of the given time period.

For updated mountain weather conditions in Estes Park, Colorado go to:
weather.com
You can also ask at the ranger station for an updated weather forecast in advance of your climb.