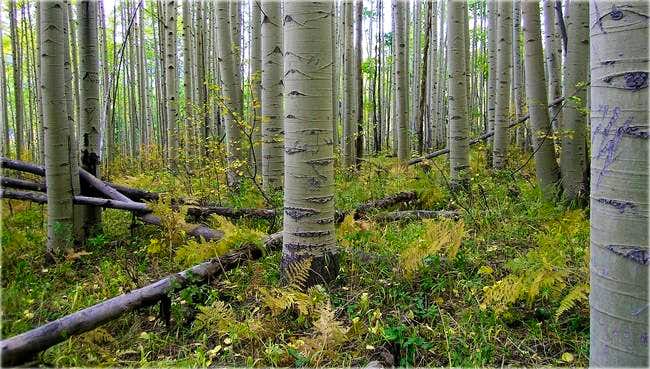 The West Elk Wilderness comprises a rugged, remote and mountainous area west of Gunnison Colorado. This wilderness encompasses 176,000 acres of Gunnison National Forest, making it the fifth largest wilderness in Colorado. This region lies south of Kebler Pass, which runs from Paonia State Recreation east to the tiny ski resort of Crested Butte and south to the Curecanti National Recreation Area. The volcanic ridges and long valleys of this pristine area offer an extensive selection of hiking and climbing. Because the area lacks fourteeners, centennial thirteeners and numerous alpine lakes you will get the benefit of hiking alone and away from the typical recreational visitor. The West Elks are outlined with tiny undeveloped towns like Crawford, Hotchkiss, Paonia and Somerset; thus freeing this wilderness from any major metro area. 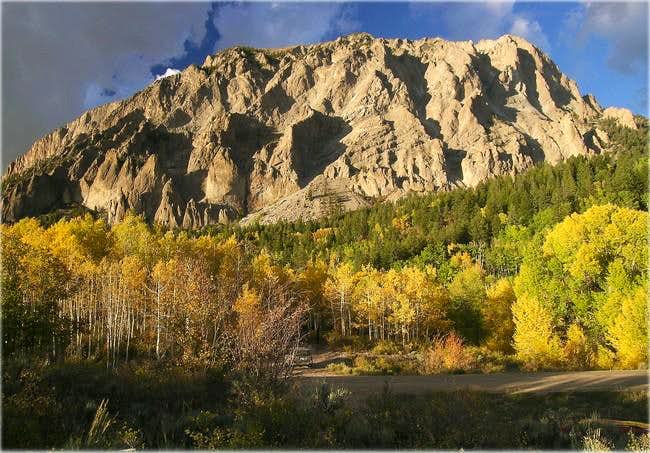 When it comes to experiencing the brisk cool temperatures of fall, golden aspen colors and clear blue skies, nothing beats the scenic West Elk Loop (Kebler/Ohio Pass) drive on Colorado Rd-12. Along this improved dirt road, visitors are graced with a perfect view of miles upon miles of flowing aspens. Peacefully tucked in the world’s second largest stand of aspen are symmetrically perfect mountains like the Beckwith’s, Mount Owen, and the Anthracite Range. It’s not long before this flowing beauty is suddenly interrupted with a wicked, 2-mile long showpiece of Eocene roughness called Marcellina Mountain (11,348-ft.) If there were ever a visually angry and menacing mountain, Marcellina would be the one.
Rising 2,800-ft directly above the Kebler/Ohio Pass Road and 4,500-ft just 2.25 miles from Anthracite Canyon, Marcellina Mountain is impossible to miss and for most, impossible to forget. I would consider this mountain to be a true landmark mountain; meaning- you recognize it from anywhere due to its unique appearance. At only 11,348-ft, Marcellina is a very prominent mountain, ranking in at #30 on Colorado’s 100 Most Prominent Peaks List, ranking ahead of 18 centennial peaks (highest 100.) Only four Colorado mountains of lower elevation rank higher in prominence than Marcellina, all of which reside far and away from higher mountains. Unlike the other ranked 11ers, Marcellina is surounded by higher mountains to the north, east and south, which makes its prominence so intriguing. What does all of this talk about prominence mean? The 360-degree views from the summit are as good as any I have ever viewed, without a doubt.

To the casual viewer, Marcellina Mountain looks impossible to climb. However, upon closer inspection this mountain renders a weakness in its near vertical surroundings, a steep 2000-ft shallow couloir that ascends to its elegant east ridge. Although the route is short at 6 miles round trip, it is steep and strenuous and requires some route finding due to its 2-mile trailless approach. I recommend using a GPS for this route.