Mount Febbas is the tenth highest mountain in the Wind River Range and the 11th highest in Wyoming. This 13er is located in the glacial, northern end of the range. It is the highest peak in the Wind Rivers that is removed from the continental divide crest and, as such, is often touted as having the best view in the range (Turret is not directly on the crest but it's much closer). The massive Febbas is the culminating point of the 30 mile-long Horse Ridge which rises from the upper Wind River basin at around 6000 feet to its crest at 13,468'. It is separated from Sunbeam Peak (to the west) by Blaurock Pass. From its summit one looks out over the largest glaciers in the American Rockies (the Bull Lake-Fremont group, the Gannett group, and the Dinwoody Glaciers) as well as almost every peak in the range. The ridge's north side makes up the south rim of Dinwoody Canyon and contains several glaciers and snowfields, a lake, large cliffs and many pinnacles - the most well known being Fourts Horn.

The south and east faces contain over a dozen lakes, glaciers, snowfields and two cirques which are virtually unclimbed due to long trailless approaches and access via private land. Though it is often climbed on a 'rest' day for those in the Dinwoody/Gannett glacier area, comments in the summit register suggest it is commonly climbed as its own goal. It is also summited by those who, after seeing Gannett Peak up close, opt for a non-technical alternative or a safer one - particularly if the bergschrund has opened up on the Gooseneck Glacier. The two summit routes are easy scrambles. Technical routes are available on over a dozen walls, arêtes and towers, the majority of which are gneiss. Febbas's Knoll Lake (misspelled as Noel on some topo maps) is the highest lake in Wyoming and the Central Rockies at 12165'/3708m.

The standard approach is via the Glacier Trail from the Torrey Lakes trailhead. To get there head four miles east of Dubois, turn south from highway 26/287 and follow the improved dirt road (FS #411; passable in cars) eight miles past Trail Lake Ranch to its end. The Glacier Trail is then taken for approximately 21 miles to the Dinwoody moraine.

Alternatively, the area can also be reached from the Elkhart Park trailhead via the route over Bonney Pass. This entails a trek of a similar distance but adds the high crossing of the divide and the complete descent of Dinwoody Glacier. If all you're after is Febbas and you're on a limited time schedule, the tribal outfitter from the Wind River reservation (307-332-7207) can take you up a jeep road and drop you at an eastern extremity of Horse Ridge near the forest service boundary. This fixes you to a strict schedule and will cost in the hundreds after the permits are added.

This is the easiest route up Febbas from the Dinwoody. From whereever your camp is, descend the moraine to its very tow down to 10800 feet, then turn east and ascend the open valley that curves around southward terminating with the steep north face of Sunbeam Peak. There is a small tarn you'll pass by a short distance east of the tow of the moraine. Do not continue all the way to the head of this valley, but aim straight for the west facing broad scree slope that provides easy access to the Horse Ridge plateau above. It's a 900 foot grueling climb on loose crap from the base of the scree slope to the plateau, at which point turn south and walk the easy terrain 0.65 mile to the top.

This route choise gives you the bonus of also tagging Sunbeam Peak, and potentially even Turret Peak if you're up for a little more adventure, however the scrambling difficulty is significantly more challenging. From the Dinwoody, hike up the far SE arm of the glacier towards Elsie Col. Pass to the right of a small rocky knob protruding out of the glacier at 11750 feet and aim for the base of a narrow talus gully leading to 12875 foot Backpackers Pass. The 800 foot climb up the boulders is one of the more harrowing talus slopes in all of the Winds, and extreme caution should be taken to avoid getting crushed by any of the large round boulders which seem ready to slide at any time.

From the pass, turn north and scramble the south ridge of Sunbeam, which offers plenty of routefinding challenges to keep the route from turning into low 5th class. See the Sunbeam Peak Page for more detailed information about this route. From Sunbeam, it's an easy class 2 walk east, then northeast to 12770 foot Blaurock Pass. The re-ascent up the SW ridge of Febbas is mostly class 2+ with some class 3 interspersed, but the talus is quite solid here. Just as you near the summit, cut left following cairns to reach the plateau to avoid a steeper section, then finish the last little bit to the top.

Summer season in the Wind Rivers is generally July-September with snow lingering on the higher trails into July. A snow storm is traditional between the last week of August and the second week of September. This is normally followed by a dry period with crisp temperatures for 1-4 weeks. On glacier routes, crevasses are hidden in June and begin opening sometime in July. Because the Trail Lake/Torrey trailhead is below 8000', on the dry side of the range (the glaciers above absorb the majority of the storms), the trailhead can surprisingly be reached almost year round; the exception being during heavy spring storms. The downside for ski approaches is that several miles must often be hiked before snow is reached. An area webcam depicts current conditions. The approach can be heavy with mosquitos June thru July. Water must be carried the first 10 miles of the Glacier Trail.

This map shows both routes up Mount Febbas described above with a pink line from a typical camp on the Dinwoody moraine. Combining with the north ridge of Turret Peak is also displayed.

Horse Ridge is a massive peneplain. It existed before the range was uplifted, floating above the scouring glaciers of the ice age and now remains as an indication of what the range once looked like.

Though it is barely visible from the Green River basin, west of the range, Febbas was named for a 19th century wrangler and guide from the Gros Ventre Lodge. The first ascent is sometimes credited to Arthur Tate, on his second reconaissance expedition of Gannett Peak in 1920 (he would make the first successful ascent of that peak two summers later). Due to its "highway-like" nature, Horse Ridge was undoubtedly useful to native tribes and as such may have seen a previous first ascent. It is this nature that allowed Carl Blaurock (and partner Albert Ellingwood) to make his noteworthy forays into the range in the 1920's when he used the adjacent Dry Creek Ridge after discussing possible routes with the FS Supervisor. The west slope from the summit drops abruptly to the pass that now carries his name.

A conspicuous feature of the summit area is Chimney Rock. It can be seen all the way from the Wind River at Burris and was once prominent. It is not a solid pinnacle, but a thumb-like pile of sliding gneiss-chips and slates. In 1873, Dr. T.B. Comstock (geologist for the Jones expedition) and party ascended Chimney Rock to investigate. Their report describes it as being a couple hundred feet higher than today! If so, this would have been the highpoint of Horse Ridge at the time though it is likely they visited the current summit as well if only for the view into the glacial basin (they are only a half mile apart across easy terrain). Either way, this was the second highest point to be climbed in the state at that time. This description, however, should deter the modern climber. Finis 'Old Man of the Mountains' Mitchell was once quoted as saying "It will fall off one of these days". Shortly after WW2 (and before wilderness designation), Finis petitioned the state to extend the Cold Springs road all the way to the summit of Febbas - almost successfully. Though many of us are glad this never happened, Finis' reasoning was that more people needed to see this alpine region in order to appreciate its beauty and to understand the value of wilderness preservation (none of these glaciers and valleys are visible from roads or populated areas). Ahead of his time, he also considered those of handicaps who had no means to enter the area. It's unlikely he would have predicted the tripling of use the area has seen in the last decade. The area was previously a candidate for the placement of Glacier NP as well as Rocky Mountain NP - either of which would have led to its development.

Fourts Horn, another feature, was named for Edgar Fourt, a Lander, Wyoming judge and pioneer. Though dozens of parties may base themselves just north of Febbas each summer, they are usually heading for Gannett. Still, while in camp, the climber's eye is attracted to the massive walls of Horse Ridge. 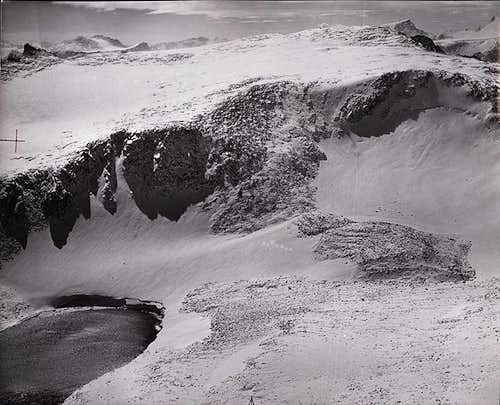 **Special thanks to longtime inactive member Jimmyjay for the above information. I recall seeing your name in the Febbas and Sunbeam summit registers from better times in the not so distant past.

My Trip Report of Mount Febbas, and all the other 13ers in the Wind Rivers