Update: A major wildfire has caused the area to be closed for safety reasons. No date yet established on when the area will be reopened but estimates are that it will be early 2018.

Larch Mountain, visible from the entire Portland/Vancouver area, looks like a gently sloped, second growth forest covered hill, and it is, from that angle. The real beauty of this peak lies in the eroded NE facing crater of this immense shield volcano, where some of the best old-growth forests and hiking trails in all the Columbia Gorge have delighted hikers and climbers for more than a hundred years. Interestingly, despite its name, not one single larch tree exists on the mountain, nor likely, ever did. (Larch does not grow this far west at this point in the Cascades.) JoelDippold adds: "The mountain's name derives from the term used by early loggers to describe the noble fir." Sounds reasonable to me, and there are lots of noble fir up there! 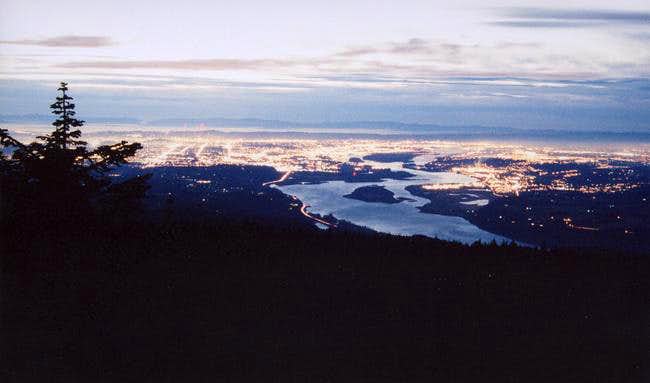 A trail was first put up to the top of Multnomah Falls as early as the 1880's and by 1883 a log bridge was constructed in the place where the much more substantial Benson Bridge is now located. In 1915 construction of a trail all the way to the top of the mountain was started by members of the Trails Club of Oregon. The job was finished and a dedication ceremony was held on Oct. 3rd. 1915. The trail is very well laid out and graded, crosses four more bridges (past the Benson bridge) and is very well maintained. The Benson Bridge was named for early lumberman, Simon Benson and was constructed in 1914. In 1933 a road to the summit from the west side was started and that project was completed in 1939. 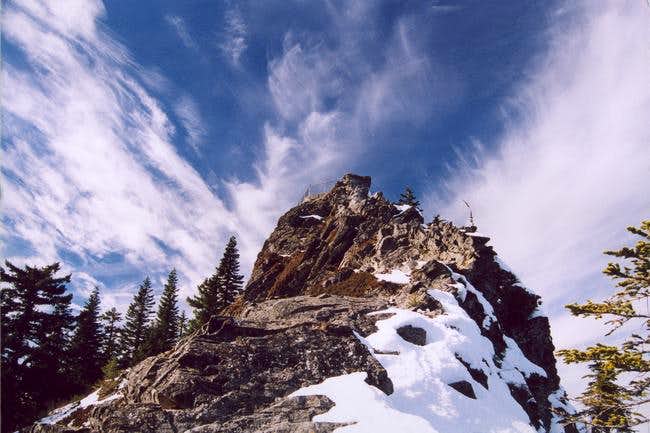 Untold thousands have driven to the summit area and taken the quarter-mile hike to Sherrard Point and marveled at the incredible views of Mt. Hood, Mt. Adams, Mt. Rainier, Mt St. Helens and Mt. Jefferson. The 800 foot high summit pinnacle is actually the ancient eroded central plug of this million-years extinct volcano and only from this point can it readily be seen just what it is you are standing on. Sherrard Point was named in 1947 to honor Thomas H. Sherrard, supervisor of the Mount Hood National Forest from 1907 to 1934.

Evidence exists that a couple of small glaciers once occupied the northeast face and today a couple of tarns can be seen 800 feet below the summit, with small rocky terminal moraines beyond. A short bushwhack from one of the many trails in the crater can easily get you to the impressive face of the summit pinnacle and these picturesque small lakes.

A series of forest service fire lookouts stood atop wooden towers on a knoll about 1,000 feet SW of the summit but the last one was completely dismantled and removed in 1976. For some further info and photos, see this link.

Update: March 1, 2015: The snow gate just past MP 10 remains closed despite there having been no snow on the mountain even at the highest elevations for over a month. That could change at any time, though, so stay tuned.

From I-84, take the Multnomah Falls exit, about 30 miles east of Portland, Oregon, from either direction and park in the large parking area. The main trail starts to the left of the lodge. During the peak tourist season, you will have to wade through sometimes hundreds of people for the first 3/10 mile up to the Benson Bridge. The crowds thin out a bit after that and above to top of the main falls, about 1.1 miles in, few venture. Over two million visit the falls per year and that number is growing.

Alternately, take the Corbett exit number 22, from either direction off I-84 and proceed up the hill to the old highway. Turn left and take a right at the Larch Mountain Road. In winter, park at the snow gate, MP 10.2 and hike the 4.6 miles to the summit. When the gate is open, the tourist route consists of parking at the top and hiking 1/4 mile to the summit, Sherrard point.

In the winter the snow gate is as close as you can drive to the summit which lies about 4.6 miles farther up the road. This "trailhead" is very popular for snowshoe enthusiasts; cross-country skiers and a few trail runners as well. 1.5 miles up the road, take the trail on the left at the right-hand switchback and head uphill into the woods for about 3/10 of a mile. Turn right at the trail junction and proceed about 1.5 miles to the summit. An alternate loop is to take a left at the junction and descend ½ mile to the next junction. Take a right for about a third of a mile and another right after crossing the stream on a log bridge. This most picturesque trail winds up the old-growth forested slope, past the beautiful Multnomah Swamp, (where you get unparalleled views of the summit pinnacle) and finally, (after a short section of highway hiking) gets you to the summit.

The best hike of all starts at the historic Multnomah Falls Lodge on the Old Columbia River Highway, milepost 32. The first 1.1 miles of the trail is paved to accommodate the thousands of summer tourists but after that, the crowds quickly diminish and even in the summer you have a good chance of enjoying the rest of the trip in solitude. The route winds past the 63 foot lower falls and 542 foot main falls, several 8 to 12 foot waterfalls and a couple of back-to-back 80 footers as it winds its way past precipitous cliffs, and through a magnificent old-growth forest for 6.8 miles to the 4,055 foot summit. The trailhead elevation is less than 50 feet so look forward to over 4,000 feet of vertical on this awesome trek. (See map, below)

Many variations and loops are possible from the 13.6 mile basic out-and-back to grander treks of 17 to 25 miles.

Winter hikers be aware: There is a curious micro-climate in some of the deep gorge canyons and this one is the most extreme of all: On occasion, this area can get buried by 10 to 15 feet of granular snow and ice pellets that obliterate the trails and make progress slow, difficult and dangerous for the ill-prepared. Such conditions occur after an arctic air mass descends over the area for a few days that sometimes results in epochal snowfall in the canyon.(See pic at right center, below) Several years ago, a group of about 12 boy scouts and a couple of leaders were dropped off at the upper trailhead in snow-free conditions intending to descend the trail to the lodge: They encountered 10 feet and more of snow blocking their path and had to make an un-planned and ill-prepared bivy in the canyon much to the dismay of those awaiting their arrival below. All survived unscathed, but chastened.

>>>>In 1996, a 400 ton rock broke loose from the face of the cliff behind the main falls and fell about 300 feet to the plunge pool below. The resulting wave was over 100 feet high and contained some small fragments of the shattered rock as it swept over a group of about 20 people in a post wedding party on the Benson Bridge. 16 of them were taken to a local hospital but fortunately, no one was seriously injured. After that, the forest service banned everyone from hiking or climbing off trail under the main falls.

>>>> Several people have ended their lives by leaping from the top of the main falls.

>>>> In more than a century of people tossing coins from the Benson Bridge the accumulated mass filling the interstices between the rocks beneath the lower falls should be several feet deep. My children figured this out on their own and in the mid 80's made quite a haul. The early 90's rockfall has pretty much buried the coins but they are still there for future generations!

A "trail park pass" or equivalent is required at the summit parking lot. There is a supply of self-serve envelopes and a slot to make your "donation". No permits needed at the lower trailhead at Multnomah Falls Lodge. Also, no passes or permits are needed to park at the snow gate in winter.

Climb any time of the year, but snowshoes may be needed on occasion in winter through about May.

The trailhead at Multnomah Falls is at the same elevation and only 13 miles east of Troutdale so here is the NOAA link for that as well as the North Oregon Cascades forecast: Weather

Lots of camping areas along the trails that are truly spectacular in this old-growth forest, Much of which is unchanged since the ice ages.

Logging Larch Mountain in the era of steam.

By the 1880’s, Ox team powered logging started on the lower slopes of the peak and by 1890, the loggers needed more power on the steeper upper slopes than animal teams could deliver. The Bridal Veil Lumbering Company purchased their first steam locomotive in 1890 and rail lines were quickly built up and around the mountain. With lines radiating out from the Bridal Veil Creek based mill town of Palmer, over three quarters of the peak was encircled by rail lines and over 30 miles of line were put in by the 1920's. One spur line even penetrated the crater area and came within about a third of a mile NE of the summit, Sherrard Point. The methods used in those bygone days would shock modern environmentalists but looking at the sites of the old roadbeds and logging camps today, one sees how well nature has covered the scars and healed the damage. Trees up to nearly two feet in diameter now grow in the center of the old railroad grades!

Most of the old roadbeds are still visible today and most can be hiked with relative ease once you know the clues to finding them. All of the more than 40 old trestles have collapsed and have nearly disintegrated but enough remnants can be found that they can be followed from ridge to ridge, stream bed to stream bed as they encircle the peak. Relics from the era can be found in abundance: Old rails, dating to as long ago as 1881,(most rails have a makers logo and a date on them and the first set was undoubtedly purchased “used”) cast iron camp stoves, old logging cables, pulleys and spools and at least 11 of the old steam donkey engine skid platforms still rest in the woods for the amateur archeologist and explorer to find and enjoy. Please leave in place anything you find for others to enjoy.

Here’s a hint where to find some of the old lines: The eastern and highest section of trail 444 (the trail that crosses the crater below Sherrard Point – see map in the photo section of this page) follows an old roadbed and where that trail ends at the junction with trail 424 the old roadbed continues across 424 and goes SW down the mountain. A short distance past the junction, the ghostly remains of the ties can be seen and lines of stones used for ballast between the ties march off down the hill. Another line crosses the paved highway a few dozen feet uphill of mile post 11 on a SW to NE heading and yet another crosses the highway at about MP 12.6.

The mountain's name derives from the term used by early loggers to describe the noble fir.