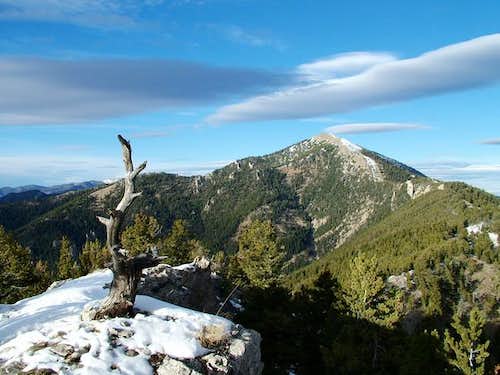 Baldy Mountain is a very popular hiking destination in the Bridger Range north of Bozeman, Montana. Even though it appears as the highest mountain in the range when viewed from Bozeman, it is the second lowest of the six named peaks in the range. One of the most interesting things to note about this mountain is that the summit register and the metal pole that is meant to be a summit marker are not on the summit; hundreds of people a year do the strenuous hike to the highest point visible from the city and sign the register, all the while ignorant of the fact that they are nowhere near the top! The true summit is nearly a mile farther north along the ridge, and requires some class 2 moves to reach the top.

Baldy Mountain is easy to spot; just look for the large "M" on the hillside to the north of Bozeman and you are looking at the lower slopes of the mountain, which is the southernmost peak in the range. A hike to the top takes you through some beautiful forested areas to an exposed ridge above the treeline that provides wonderful panoramic views of the surrounding area. 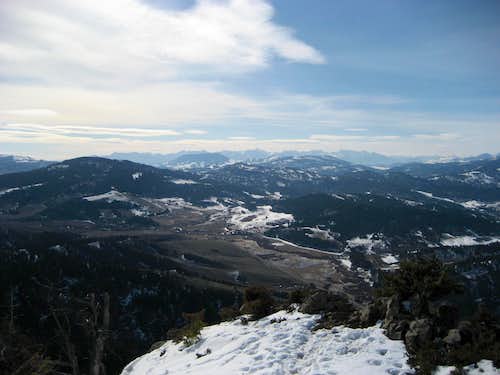 The Gallatin Range from Baldy Mountain

Note: This page was reworked on September 28, 2009 by the new page owner, musicman82, from its original form by the first page author. Thanks to VincePoore for his help with the mileages. 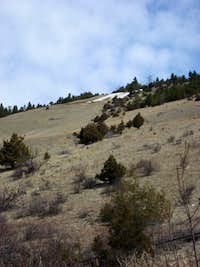 Looking up to the "M" from the trail head 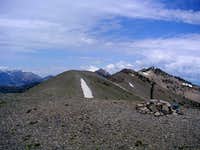 From Main Street in Bozeman, MT, turn north on North Rouse Avenue (later becomes Highway 86) and drive for just over 4 miles and look for the "M" trail head on the left. There is a large parking area, which often overflows onto the highway due to the fact that this is a heavily used area.

Take one of the two trail options to reach the "M" (both the left and right forks get you there), and then make your way to the top of the "M"; look for the obvious trail that keeps heading up through the trees. Some sections of this trail are quite steep, and it gets you up in a hurry. At the rock formation, the trail turns left and follows the top of the ridge to a prominent point which offers the first good views of the false Baldy summit. After descending a little, the trail remains level for a while before heading left along the hillside and through the last trees. At this point, the trail gets very steep as it climbs the loose scree to the false summit, where you are greeted by a pole and a box containing the summit register. 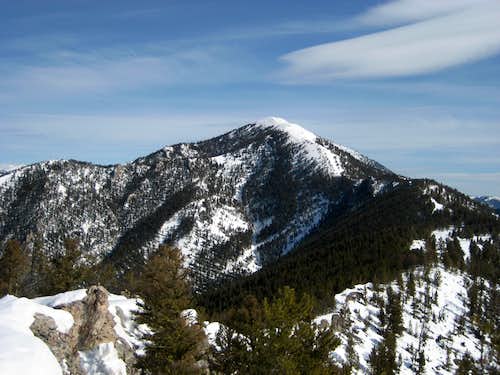 Looking towards the false summit in April 2009 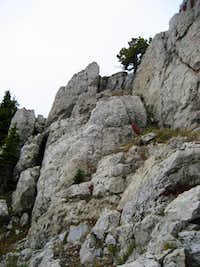 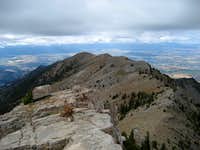 Continue down and up along the ridge to the north for another half mile and look for the very large rock outcropping that is easily recognizable as the highest point. The simplest way to the top is to head right around the rocks and scramble up easy Class 2 terrain to the flat rocky summit. Any number of Class 3 routes may be climbed as well, which provides a nice diversion after so much walking. There is a small rock cairn on top that has been constructed in the last couple years; it now sits at the end of the rock tip in this image by VincePoore.

Reaching the summit of Baldy Mountain is a one-way hike of almost 4.5 miles with about 4000 feet of elevation gain. Allow at least five or six hours to complete the trip up and down; it can be done faster, but most people will take significantly longer than that. It is also possible to access the summit of Baldy Mountain via the Bridger Ridge traverse, which follows the ridge down to Baldy from Bridger Peak, which lies to the north. 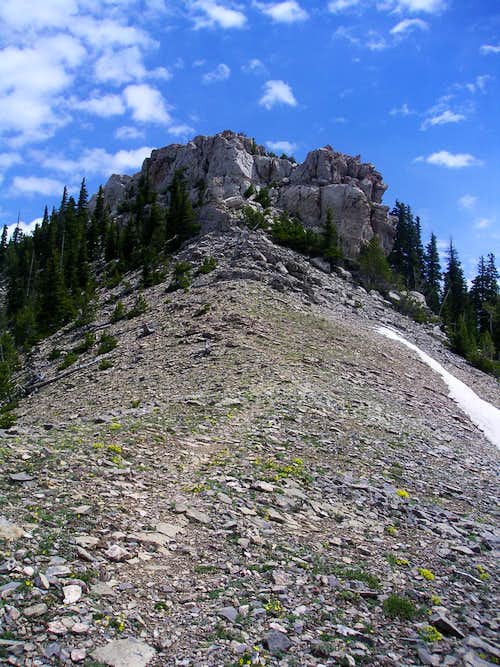 There are no permits or fees required to hike on Baldy Mountain. The peak is covered with snow well into May most years, but there is generally a good snowshoe trail up to the summit. Bring plenty of water, as this is a strenuous hike and there is no water along the trail.

Camping is not allowed anywhere along the Bridger Recreational Trail.

More information on the Bridger Range