"We move on where soon we came to a parched sandy waste where not a sign of animal or vegetable life is seen, only rocks and sand... We had been directed to go to a certain large Butte which became visible in the afternoon, - at its base was a large spring. On and on we slowly went but the Butte seemed to get but little nearer, - yet we must reach it or suffer."

Mrs. W. A. Loughary
July 17, 1864
Monarch of the eastern Snake River Plain, Big Southern Butte is a prominent landmark visible from all directions. It is a solitary mountain located in the middle of the Snake River Plain. From the desert, the mountain rises 2,500 feet with no foothills or gentle slopes.

The Butte was used as both a landmark and a water stop on the Goodale cutoff of the Oregon Trail. Its northern slopes provide spring water in the thirsty desert. This also makes the mountain a small ecosystem in the middle of the unforgiving desert.

Although not the tallest mountain, it may afford the best summit views of Southeast Idaho. A 360 degree panoramic view affords views from the Tetons to the south hills of Twin Falls. The Smiley knob of the Pioneer Range, the Lost River Range, and the Lemhis are all in view, as are the major summits of Southeast Idaho south of the Snake River. With a pair of binoculars, large buildings from Idaho Falls to American Falls are visible.

The mountain is around 300,000 years old and is of volcanic origin. It overlooks the Great Rift area and Craters of the Moon.

Hang gliding is another popular activity on the slopes of the butte. There is a launch site on the western, lower end of the peak. Come during a warm summer weekend and you have a guaranteed view of hang gliders around the peak. 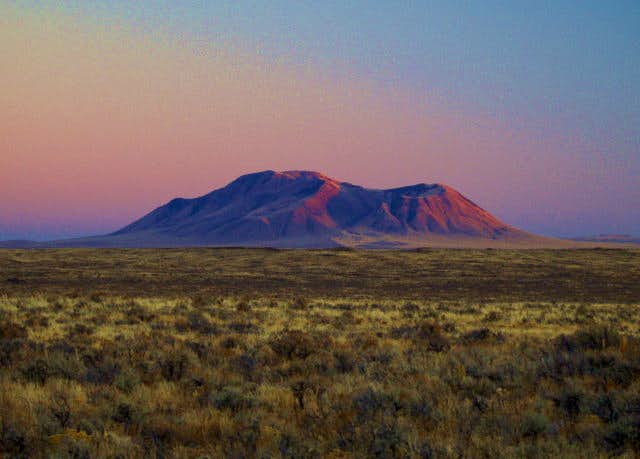 The approach from the east is through Atomic City. At the south end of town, there is a gravel road that heads off toward the south. From this this road turn right on one of the first roads that leads toward the butte. Follow this road through some cattle watering holes until you come right to the butte. Skirt the southern edge of the butte to circle around toward the northern drainage and road to the top. View Approach Map.

The land to the northeast of the Butte lies within the Idaho National Laboratory and is closed to the general public. The Butte itself lies within BLM land. The summit road was closed in 1998-99 due to landslides, but has reopened recently after regrading by the BLM.

The mountain is climbable year round, although during heavy snow years the approach from the desert may be impassable. If you plan to drive to the top, the road may not be completely clear until mid summer.

There are no camping areas near the butte, but Craters of the Moon National Monument has great camping. I believe that low-impact camping is allowed on the BLM lands near the butte with fire restrictions.

There is a webcam a few miles to the east in the INL.

I went off this mountain in early 1989 while decending this mountain from a Microwave Site on top in a winter blizzard. The Snowcat was on solid ice as it rounded a corner and shot over the mountain to land approx. 800 feet below. I still have a picture of the snowcat where it landed on the mountain. I was rescued in -10 degree weather by the brave and professional patrol that responded to the scene. I would like to thank and talk to these people as I owe them a gratefull thanks!!!
Jim McCord
Arvada, Co.
jimnsandy@comcast.net