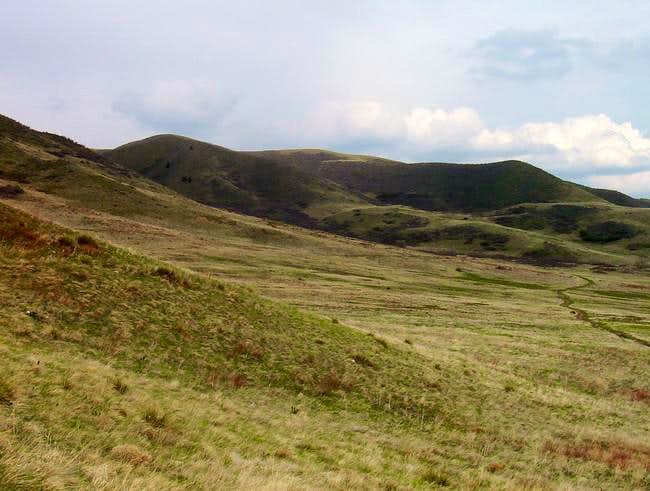 Green Mountain is a low mountain on the very eastern edge of the Colorado Front Range. Because this mountain is one of the first to rise out of the plains, it is located at that special place where the mountains meet the endless American prairie, and portrays both sides of this unique character. The mountain is virtually barren of trees, and instead covered with scrubby grasses and shrubs interspersed with cacti, yucca and other sunloving plants.

Green Mountain rises abruptly out of the western edge of the city of Lakewood. Unfortunately, because of this, the mountain is not pristine. A radio tower has been installed on the southern edge of the broad summit plateau, and various other facilities can be found on the eastern slopes of the mountain. Additionally, houses blanket the lower eastern and northern slopes of the mountain, and a jeep road goes all the way to the top to service the towers. No worries, the park is closed to all motorized vehicles.

Green Mountain is a huge mountain for it's small elevation. Indeed the park in which it is contained measures 2400 acres, and the mountain itself rises nearly on thousand feet over the surrounding scenery. Green Mountain's massif is very much like a high alpine massif on a smaller scale. There are at least four recognizable subpeaks, in addition to a multitude of smaller summits, ridges and drainages. Despite the fact that the mountain is surrounded by an ever encroaching urban area. Solitude, and a sensation of a true mountain experience can still be found as one climbs higher and farther from the roads. Spectacular views of steep slopes descending into the Denver Metro area, as well as views of the surrounding mountains rising up to the higher snowy mountains of the Front Range from the summit: on a clear day three fourteeners can be seen. The whole area is very beautiful and it is one of my favorite places in the near Denver Foothills.

In many ways Green Mountain can be considered somewhat of an urban mountain. Located only twenty minutes from Downtown Denver, it is not uncommon for people to come here after to work, to get a workout, soak in the views, and enjoy this natural oasis that is right outside their backyard. I love coming here after school, to relax after a hard day's work. Such is the beauty of living along the Front Range.

Millions of people drive by this mountain on I-70 and US-285 as they head up to the higher more interesting mountains of the Front Range. Those who do stop are awarded by a large network of trails and the ability to explore this unique spot. Nearby landmarks include the famous Dinosaur Ridge, and Red Rocks Amphitheatre. Green Mountain is linked to all of these and other open space parks by a vast network of trails. This makes for the opportunity to do extended hiking or cycling trips.

Three trailheads allow you to access Green Mountain. All of them are found on west Alameda Ave. on the southern side of the mountain. The best way to access Alameda is from Union St. from Sixth Ave. There is no exit for Alameda from C-470.

All of these trailheads allow access to the Green Mountain trail. This six mile loop, exploresthe vast southern and eastern drainages of the mountain, as well as climbing to the summit, and crossing the vast summit plateau. The Green Mountain trail is great for hikers but it is most popular among mountain bikers.

The Green Mtn. area at the very edge of the plains is very interesting in many ways. Geologically it is fascinating, though not being a geologist is I can't really explain why. The Morrison Fault, the fault which helped form much of the Front Range, is located directly on the western edge of the highway, where highway C-470 is located. This rugged uplift out from the plains has formed some very interesting and beautiful rock formations such as Red Rocks, Dinosaur Ridge, and the Flatirons farther north in Boulder. 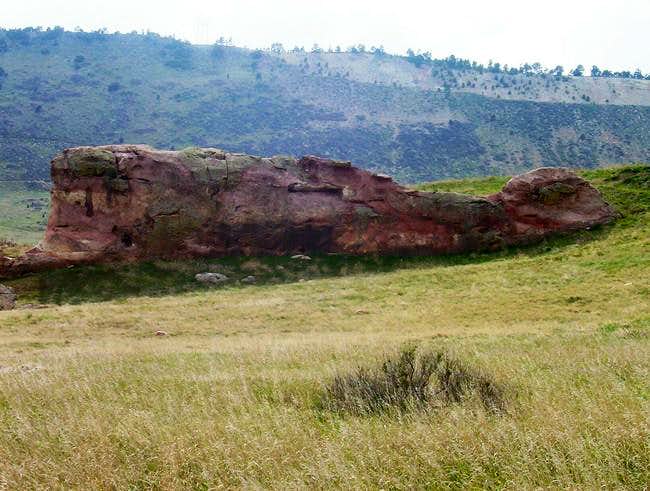 This rocky outcropping is located on the grassy rolling slopes of Green Mtn's west side. It is fairly typical of some of the other
formations in the area though on a smaller scale.

Dinosaur Ridge, directly across the highway, is a fascinating place where visitors can gaze at the remnants of dinoasuers in the form of hundreds of fossilized footprints they left on the mountain side. Dinosaur Ridge is part of Matthew Winter Open Space Park which also includes the area around Red Rocks. This park and its expansive system of trail is linked to Dinosaur Ridge by a bridge over the highway.

This whole area is very big thanks to the trails connecting the various parks together and forms a huge recreation area on the outskirts of the city. This natural oasis contains spectacular scenery, rugged mountains, and even some wildlife. There is a fairly large prairie dog town on the lower western slopes of Green Mountain. Elk and antelope can sometimes be seen, and there is a plethora of birds and smaller mammals.

Mount Morrison rules as the undisputed monarch of the area both in terms of height, and sheer presence: it's visible from nearly all viepoints in the area. Several other small mountains including Mount Falcon, Mount Galbraith, North and South Table Mountains and many others still are located in this area making for great hiking in winter when other higher routes are inaccessible. More information on the Near Denver Foothills can be seen on SP member Aaron Johnson's excellent Mt. Morrison page.

Hayden-Green Mountain Park is the secong biggest park in the Lakewood Parks and Recreation System at 2400 acres.

No permits, fees, or licenses are required to hike in the park or to park at the trailheads. Pets must be kept on leash the entire time in the park. High visitation in the park has caused on increase in erosion, so it is asked that you please remain on the trails.

Green Mountain can be climbed any time of year. It is very sunny, due to the lack of trees, which makes it a nice place to explore in the winter when other places are colder. I think it would be awesome to go skiing on the mountain after a massive storm such as the blizzard of 2003, but the avalanche danger would probably be pretty extreme because the terrain is so steep.

In summer it can get to be very hot, and rattlesnakes are a sure danger.

Sorry no camping, park is for day use only.

Conditions can be checked for Lakewood or Golden. Conditions don't vary much between the base of the mountain and the summit, with the exception of the wind. The mountain is very exposed to the wind because of the lack of trees.

Hi, In your getting there section: " There is no exit for Alameda from C-470." There is now an interchange and Alameda can be accessed from C-470 (using a quite-fancy, Italian-style overpass, I might add). Just a courtesy note! Sarah