From Safford, drive 7.5 miles south on US-191. Turn right onto the paved AZ-366, the Swift Trail Parkway, and start driving up the mountain. The road is straight at first, but becomes winding after a few miles. After 11.5 miles, you’ll reach the Arcadia Campground at 6,700' (see below). The road is gated here between November 15 and April 15. 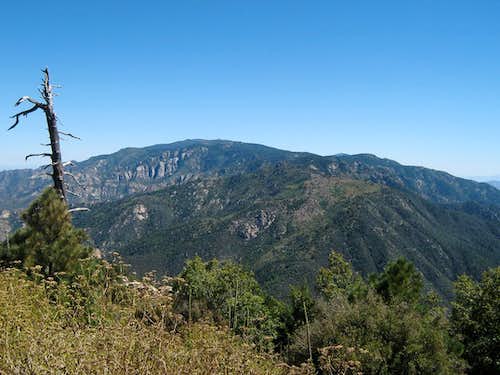 The road passes through a small village of summer cabins near Turkey Flat, then crests the main range crest near Ladybug Peak (1 mile r/t, 300 feet of gain, lots of ladybugs). Now on the west-facing slopes, the views down into the Klondyke-Aravaipa Valley below are amazing. The pavement ends roughly 20 miles from US-191 at a big turnaround south of Mount Graham. The hard-pack continuation resumes, with Hospital Flat Campground coming up in about a mile. The trailhead to nearby Heliograph Peak is also nearby.

In 2005, the summit region was burned by the massive Nuttall-Gibson Fire. Below are some images of the summit (before and after).

Because the summit is officially off-limits, I will be careful in how I reveal the secret ways to the top.

You can park at the large paved turnaround where the pavement ends and just walk up the closed forest road to the top, a round trip of about 6 miles and 1,500-1,700 feet of gain. The roads shown on the topographical map are accurate. However, this road is well-posted against travel, so you leave yourself in the open on the off chance they are patrolling it.

You can also access this road via Hospital Flat Campground. It involves a little cross country and walking along old jeep tracks.

You can also come from below via the Arcadia Trail and access this final road cutting through the forest.

Do not start from anywhere near the observatories. These are patrolled.

I have hiked the peak twice, and both times had no trouble. It is not heavily patrolled. My opinion is that the forest service keeps the refugium concept in reserve on the off-chance they need to justify an arrest, which is extremely unlikely. Bear in mind that back in the 1980s, there was a lot of acrimony from the various people and organizations about the observatory being built. Nowadays, it's very quiet. Just don't attract attention to yourself, be courteous and leave no trace.

Truthfully, the summit is a dud. If you are looking for great views, go to Heliograph Peak or Ladybug Peak. The only reason to climb Mount Graham is for bragging rights.

Assuming the gate is open and the roads plowed, the next developed campground is the Shannon Campground, near the base of Heliograph Peak. Beyond that, in order, are the Hospital Flat, Cunningham, Soldier Creek and Riggs Flat Campgrounds. Some are more developed than others. Hospital Flat is fairly basic and secluded. Soldier Creek is popular with families with kids, while Riggs Flat fronts a small reservoir at the far end of the Swift Trail Parkway (37 miles since leaving US-191). Riggs Flat is popular with fishers. All these campgrounds require a fee

There are also a handful of free spots, first-come, first-serve, mostly at the end of rough roads that may require 4-wheel drive.

Hospital Flat Campground would be the closest for an ascent of Mount Graham.