South Sandia Peak is another large granite mountain in long series of thrust up peaks along the Rio Grande Rift that runs through the center of New Mexico and extends into Southern Colorado. Less popular than Sandia Peak to the north, South Sandia Peak remains relatively empty especially in the upper reaches, and makes for an excellent escape from Albuquerque. The peak offers incredible views of most of the peaks in central New Mexico from Sierra Blanca to the south to the Sangre de Cristos to the north.

Spanning the range for ecosystems from high desert to sub-alpine forests, the journey to the summit offers a wonderful collection of scenery with a wide variety of flora and fauna. All routes are long walks up to the summit region ranging between 3-5 hours on the ascent. 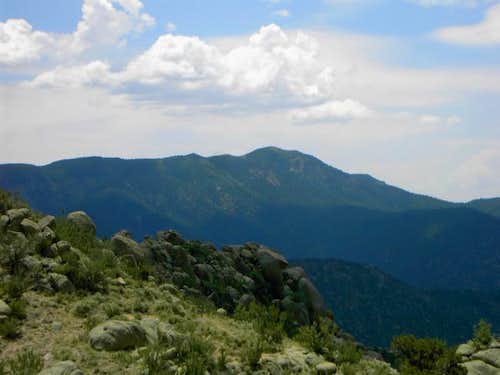 South Sandia from the north near Domingo Baca Canyon. 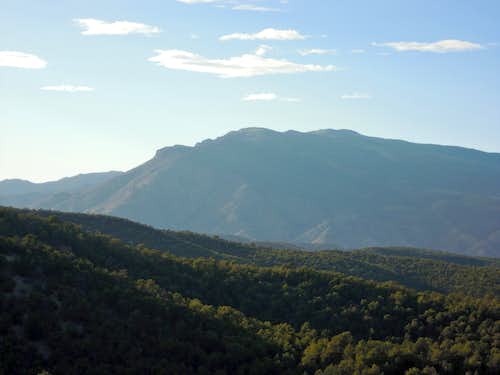 From the southeast on Highway 333 south of Tijeras, NM.

-None of the trails below takes you all the way to the summit, but they all point you in the right direction. Just west of the junction between Embudito Trail and the Crest Trail in Oso Pass, a trail that follows the crest northward from Embudito Trail to the summit.

South Crest Trailhead:
Take Interstate 40 east from Albuquerque. Get off at Exit 175 and take an immediate left back beneath the freeway to the north (before the 4-way intersection). Take a right on the north side of the freeway (a left will send you back onto the freeway). Continue straight on the road passed the houses and the trailhead parking area is at the end of the road.

Embudo Trailhead:
Follow Indian School Blvd. in Albuquerque to its eastern end. The trailhead is at the end of the road and opens to the western flank of the mountain. A long walk up Embudo Canyon to the top of the ridge extending southward from the western shoulder of South Sandia, the Embudo trail joins Three Gun Trail, which comes from the south. From there, continue north to the intersection with Embudito. Follow Embudito Trail east to the crest.

Embudito Trailhead:
Take Montgomery Blvd. in Albuquerque to its eastern end. Take a left on Glenwoofs Hills Drive, then a left on Cedar Brook Avenue and an quick right on to Desert Hills Place straight to the trailhead. A steep hike up Embudito canyon, this trail will take you straight up to the intersection with Embudo on the western shoulder of the mountain with no real deviations from the straight line.

Three-Gun Trailhead:
Drive on I-40 east from Albuquerque to the Carnuel 170 Exit. Continue east 1.5 miles and turn left on to Monticello Dr. Take another left on to Alegre Rd. and continue to Siempre Verde Dr., stay right, and proceed north on the Tres Pistolas dirt road to the trailhead. 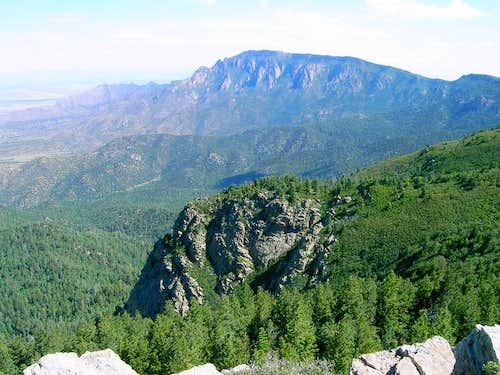 Protected as part of the Sandia District of the Cibola National Forest and the Sandia Mountains Wilderness Area, South Sandia Peak has several restrictions. No motorized vehicles or mechanical transport like mountain bikes are allowed on the trails and a $3 parking fee is required at all trailheads within the national forest or wilderness, which means all parking except at the Southern Crest Trailhead are free. Dogs are allowed but must be kept on a leash and picked up after.

Best times (mildest temperatures and calmest winds) are from May and September-October. During the winter, winds are fierce, temperatures plummet, and the snow becomes pretty deep, so come prepared.

Like many of the mountains in the four corners region of the United States, afternoon thunderstorms hound South Sandia Peak frequently during the spring, summer, and fall. These storms have a tendency to catch climbers and hikers off-guard since they form within an hour from when the first cloud begins to appear so it is best to get up and down the mountain before the afternoon hours.

Also pack plenty of water because of the dry air and intense sun along with the altitude will drain your body of fluids rapidly.

There are no campgrounds on the mountain but camping is allowed as long as campfires aren't used (high fire danger). However, all climbs are done within a day so camping is unnecessary for most people.

For mountain conditions you can take the following link, which is also offered at the Sandia Peak and useful for South Sandia Peak because of their close proximity to each other.
Sandia Weather
NOAA 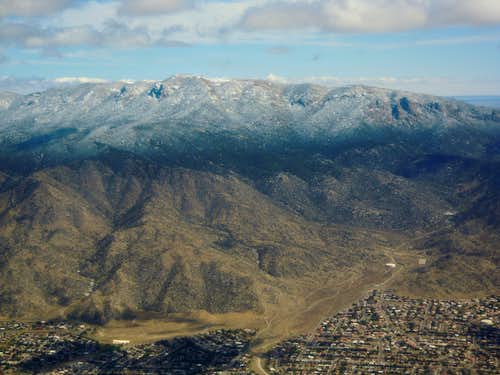 Embudo Trail to Oso Pass to summit trail cutoff (instead of crest trail) is 12.7 miles round trip with 3600 ft of gain. Outstanding hike; highly recommended.

South Sandia is under 10k. It currently has the parent of NM 10k+ peaks which is incorrect.

After climbing S. Sandia via the Embudo/3 Guns/Embudito/Crest trail route, I feel certain that the one-way distance is quite a bit more than 3.2 miles.