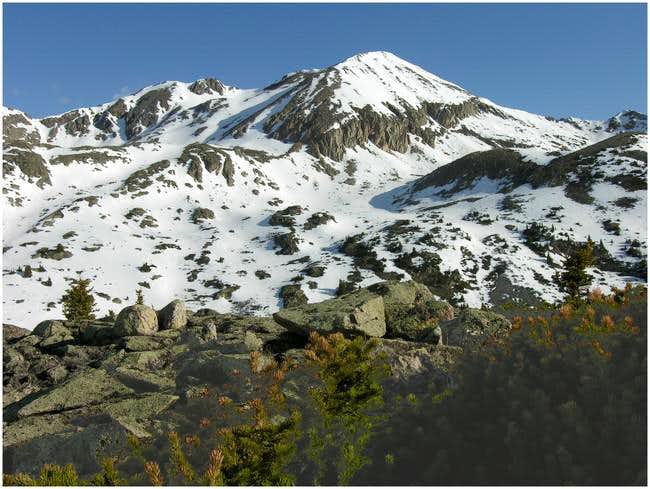 Sayres Benchmark
A "real" mountain should mean it's a beautiful mountain, and the real Sayres BM is nothing short of the appropriate and descriptive word “beautiful.” En route past the historic ghost town of Winfield, Colorado, it won’t take long to realize what mountain lords the North Fork of Clear Creek Drainage.

Located 2 miles southwest of Colorado’ fifth highest mountain, Sayres Benchmark measures up well to the higher and more popular, La Plata Peak. The mountain is unofficially named, however it is named on the USGS Independence Pass Quad as Sayres Benchmark (BM). Using the 300-ft criterion, Sayres BM has no trouble establishing itself as a hard ranked, singular mountain. Three major ridges parting from its 13,758-ft summit further validate a hard ranking status. Each of these three ridges includes an 800-1000-ft drop before connecting to another mountain.

I’m not really sure what the standard route is on Sayres BM, but we selected a route that logistically made sense for a snow-laden month of May, the Southwest Face Route. Remember, the south, southeasterly facing aspects of this mountain range really gets blasted with early spring sun providing for a faster melt-off. In April/May locating dry, snow-less, routes on north side of the valley should be easy in the Clear Creek Valley. Our first choice was an ascent of the east ridge, but we showed up about two weeks early. The upper southwest face was still plastered with steep snow, and the cliff ridden run-out beneath that face couldn’t be worse. A slip on that east ridge route would certainly qualify as a real bad experience. 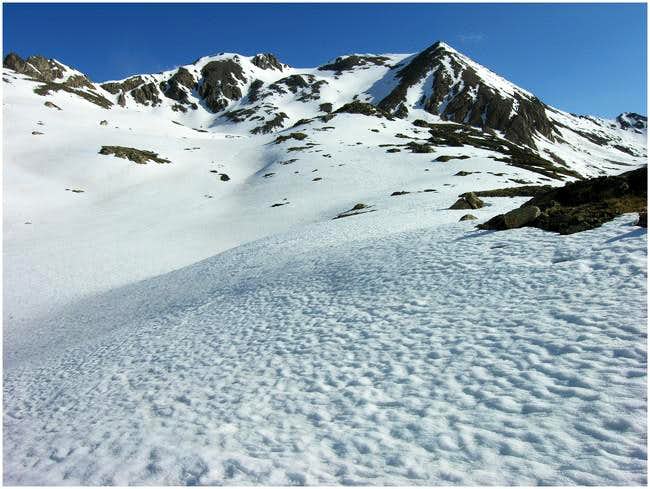 Take Chaffee County 390 west from Hwy 24 (15 miles north of Buena Vista, 19.3 miles south of Leadville.) County 390 is an improved dirt road for all vehicles. Continue 11.8 miles on 390 until you reach the historic mining town of Winfield. The road will fork here; turn right and do not turn left and go over the bridge over Clear Creek. The road becomes a high clearance road immediately. Go .33 mile to the old Winfield Cemetery and continue another 2 miles where the road will fork. The right fork is the Winfield TH for La Plata Peak. Go straight, and continue about another mile where the road ends with a gate and a TH sign-in register for the Upper North Fork of Clear Creek Trail. This is also the starting spot for the southwest Face Route on Sayres BM.