Monte Caòz is located in the remote and solitary Pale di San Lucano Subgroup of Pale di San Martino in the Dolomites. The Subgroup is located to the north-west of the main range and is climbed rarely, probably due to the fact that more interesting mountains surround it. Moreover - though it is counted among the Dolomites - its northern ridge is composed of black volcanic rock, covered by beautiful meadows. Monte Caòz is located on that northern ridge, the first major mountain which leads to the subgroup's highpoint, Cima Pape o Sanson (2503m).

Like all of the summits on that northern ridge Monte Caòz shows an impressive north-west face, which drops 1000m into Valle di Gares below. Being brittle and crumbly no serious climbing is possible on that face. Caòz' south-eastern side however is covered by forests and meadows and offers a moderately difficult ascent route. In fact only the final 350m from Forca di Caòz along the south ridge pose problems due to exposure to the 1000m drop.

Itself not being a perfect beauty Monte Caòz is a good viewpoint to view the surrounding mountains. There is probably no better place to see the north-west pillar of Monte Agner, which is with 1600m (one of) the tallest rock faces of the whole Alps. In fact it dominates Valle di San Lucano in a way that each time the trees open up enough to offer a view to the south your eyes are drawn to that wall in awe. Other nearby mountains include Civetta, Marmolada and naturally the Pale di San Martino. On our own climb, however, clouds rose from the valley to finally cover everything so that many of the photos have been taken on another day, in which we also used part of the ascent route.

Speaking of the route, there are two possible trailheads: Gares at 1381m in Valle di Gares and Col di Pra at 843m in Valle di San Lucano. We used the latter from which you have to climb more than 1200m to reach the summit. Though an easy scramble you have to be in good condition to undertake this climb. 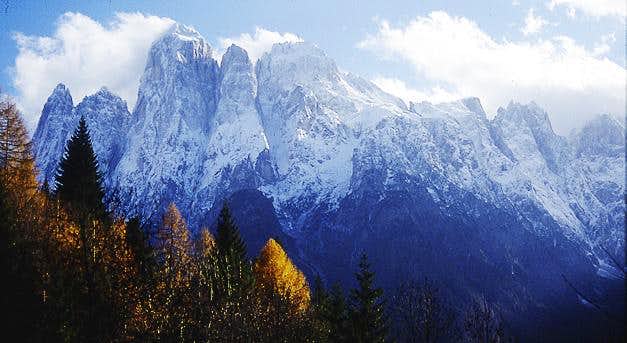 As mentioned in the overview Monte Caòz and in fact all the ascent routes are perfect vantage points for gaping at the Monte Agner North Face (2872m), with 1600m the Alps highest vertical rock face by some accounts. The picture above was probably taken close to the trailhead at Col di Pra and shows Monte Agner with its satellites Spiz d'Agner (2617m) (left), Torre Armena (2652m) and Lastei d'Agner (2844m). To the right is the equally impressive end of Valle d'Angheraz.

Here are just some examples of the views you can enjoy while hiking Monte Caòz. The northern ridge of Pale di San Lucano has no vegetaition other than meadows so nothing but mountains obstruct your views. Sometimes - for me twice - clouds do that instead.

As said above the Pale di San Lucano Group is rather remote and it is a bit complicated to get there.

There is no red tape either in Valle di Gares nor in Valle di San Lucano. Everywhere you are requested to take your garbage back with you but that's a no-brainer. At Gares you need to pay a parking fee of €3 / day.

You can climb Monte Caòz pretty much all year round. In winter reaching the trailheads is probably quite a challenge. For a ski tour you might be in for some longish access through the valleys. The climb is straightforward and definitely possible with tour skis (or snow shoes).

In summer the best time is June through September. July was perfect because of the many colourful meadows you wade through during the ascent.

Camping
I have been able to find campgrounds only in Valle del Biois (north of Gares):

Hotels and Appartments
Accommodation links for the Cordevole Valley are also scarce so this is all I could find for the area: