Your are hereby forgiven for not having been aware of Mt Isolation's existence. Mt Isolaton is small, unprepossessing, wooded, and
utterly dwarfed by nearby Mt Washington. It also lives up to its name by being located in the Dry River Wilderness, which gives it some of the longest approaches of any 4000-foot peak in the White Mountains.

Mt Isolation just barely earns the title "4000-footer"; it is the second-smallest on the AMC list.

However, the summit will surprise you with excellent views all around. The views southward are somewhat obstructed by trees, but nothing detracts from the spectacle to the north and the west: the southern Presidentials and Mount Washington itself.

Mt Isolation is the tallest and northernmost peak in the often-overlooked Southern Ridges of the Presidential Range.

While you're in the neighborhood, head south about a mile and take in a true 360-degree panorama from Mount Davis(3,819').

Mt Isolation is the northernmost named peak of Montalban Ridge, located due south of Mt Washington, in the Dry River Wilderness. The Wilderness fills most of the area between Crawford Notch (rte 302) on the west, Pinkham Notch (rte 16) on the east, Mt Washington on the north, and the village of Bartlett to the south.

To get there from Boston, the simplest route is to take Interstate 93 north to rte 112 (Kancamagus Highway) East, and turn north onto rte 16 in the town of Conway. In tourist season, it may be faster to stay on 93 past Franconia Notch and use rte 302 to head east, avoiding Conway, North Conway, and sightseers on the Kancamagus.

The summit of Mt Isolation is reached by a short, nameless spur trail that heads west from Davis Path. Around 2005 the USFS decided to treat the spur trail to the summit as "unofficial", removing the arrow-shaped sign indicating the trail (but leaving the rectangular "Davis Path" sign a few feet away). This decision went largely 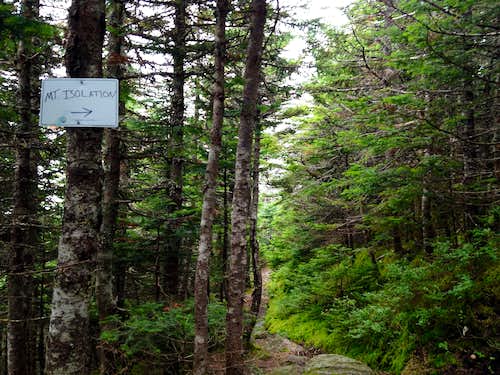 unnoticed: the trail is too short to need any maintenance, and self-appointed signsmiths have placed new signs almost as fast as they can be removed.  As of summer 2014 there is a large temporary sign with an AMC logo.

Davis Path runs for fifteen miles from the village of Notchland on rte 302, to the summit cone of Mt Washington. A simple (and gentle) but lengthy route to Mt Isolation, then, is simply to follow Davis Path from the south. 9.7 miles one way, 4,400 ft elevation gain. 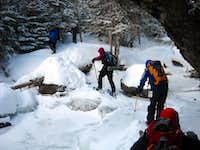 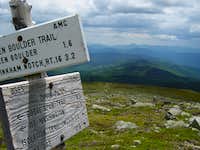 Peak can be reached by descending from Washington

A scenic and challenging approach comes from the northeast. It starts on the Glen Boulder Trail, which leaves rte 16 at Glen Ellis Falls, just 3/4 mile south of the Pinkham Notch Visitor Center. Follow the Glen Boulder Trail (well above treeline as you pass first its namesake boulder and then Slide Peak) until it joins Davis Path half a mile below Boott Spur. Turn your back on the Mt Washington summit and descend Davis Path to Mt Isolation. 6 miles one way, 3,250 ft elevation gain (reverse direction adds 1,500 ft climb toward Boott Spur).

Be prepared for high winds above treeline, and carry plenty of water: There's none to be found after the bottom 3/4 mi of Glen Boulder Trail. [EDIT: I have a report that there is a spring about 20m offtrail (to climber's right) in a shrubby spot somewhere above Glen Boulder.] (Once at your destination of Mt Isolation, the nearest water is a tiny but reliable stream that crosses Davis Path about half a mile south of Mt Isolation's summit.)

From the west, the closest thing to a sensible approach is probably to take Crawford Path to the Mizpah Cutoff on Mt Pierce, then descend the Dry River Cutoff, turning briefly south on the Dry River Trail to reach the western end of the Isolation Trail. Follow the Isolation Trail east until it joins the Davis Trail, then turn south to Mt Isolation. Don't be surprised if parts of this route are muddy or hard to find - the trails in Oakes Gulf don't get much use, or much maintenance. Also, beware of crossing the Dry River after rain. Nearly eight miles one way, at least 3,600 ft elevation gain (reverse direction adds about 1,400 feet climbing back over Mt Pierce, plus about 200 ft on Davis Path).

There are none particularly close to Mt Isolation. The nearest are Mizpah Spring Hut on Mt Pierce and the Lakes of the Clouds Hut on Mt Monroe. Follow the links to see rates and availability and to make online reservations.

The nearest established campsite is Rocky Branch Shelter #2, located at the junction of the Isolation and Rocky Branch Trails, under three miles away over easy terrain.

Another option is Dry River Shelter #3, located on the Dry River Trail below Mt Eisenhower. From there to Mt Isolation requires a zig-zag route, but is only about three miles. From the shelter to any road is another story.

Also within striking distance is Nauman Tentsite, beside Mizpah Hut near the top of Mt Pierce. About four miles from Mt Isolation, and only a couple of miles from rte 302 via Crawford Path, but likely to be crowded, and of course requires climbing Mt Pierce.

The following three campsites may be useful for a long southern approach:

Rocky Branch Shelter #1, located at the intersection of the the Rocky Branch and Stairs Col Trails (ie, about two miles east of the now-defunct Resolution Shelter), may be of interest when following the Rocky Branch trail from its southern end.

Mount Langdon Shelter, located on the Mt Stanton Trail not far from the Mt Langdon and Mt Parker Trails, may be useful if you'd like to follow the longest possible route, over the entire Montalban Ridge starting with Mt Stanton (across the Saco River from Attitash ski resort).

Note that Resolution Shelter, located beside Davis Path near its junction with the Mt Parker Trail (ie, about 2 1/4 miles from rte 302), is closed as of summer 2010 due to disrepair and will not be rebuilt. I expect the forest service will dismantle its remains in a season or three. Camping is forbidden within a quarter-mile radius of the shelter site.

A handful of other campsites exist at long intervals along the Davis and Dry River trails, but they are not marked on any map that I know of and I didn't take careful note of their locations as I hiked by.

No reservations accepted at shelters or campsites. Some have a caretaker (and charge a fee) in season. Details for sites in the Dry River Wilderness are hard to find - if you have questions, try contacting the AMC at lodging@outdoors.org or 603-466-2727. You may also be able to get answers to your questions by posting them to the AMC Trail Conditions message board or the message board on Views from the Top.

As explained below, the rules are a bit stricter in the Dry River Wilderness and in the Cutler River Drainage than in most of the WMNF.
The Cutler River Drainage econmpasses the eastern slopes of Mt Washington: bounded by Nelson Crag, the summit, Boott Spur, Split Rock, Pinkham Notch Visitor Center, and the 2-mile post on the Auto Road.

Here are the rules (summarized from here):

It is possible that the Forest Service may declare additional rules or create new Forest Protection Areas. Obey all posted signs.

The above rules can be loosely summarized as:
make sure your camp is below treeline, at least 200 feet from the trail, and at least 1/4 mile from any road or shelter.

These are fairly abundant in New Hampshire. One that is particularly close is Dry River Campground, inside Crawford Notch State park on route 302.

Another is Glen Ellis Campground, on route 302 in Glen.

Year-round. Due to the distances involved, winter attempts should not be embarked upon lightly. Furthermore, due to extreme exposure to weather, the Glen Boulder route should not be attempted in winter without prior winter mountaineering experience.

Mt Isolation is low, wooded, and partly sheltered by its larger neighbors to the north and west, so valley forecasts should be fairly reliable.
However, if you're trying the Glen Boulder route, you'll want to check the higher summits forecast to get an idea what conditions will be like above treeline. In winter and spring on the Glen Boulder route it's also worth checking the avalanche forecast.