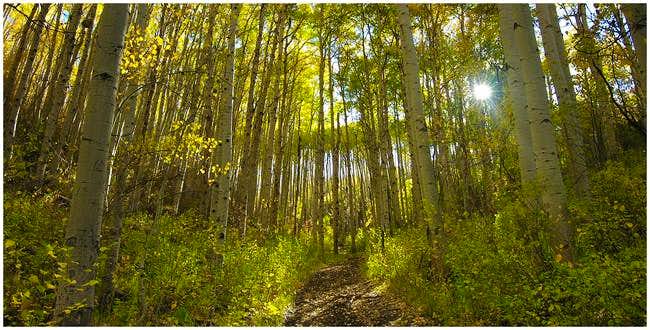 The West Elk Wilderness
The West Elk Wilderness comprises a remote and mountainous area west of Gunnison Colorado. The West Elks encompasses 176,000 acres of Gunnison National Forest, making it the fifth largest wilderness in Colorado. This region resides south of Kebler Pass, which runs east from Paonia State Recreation to the tiny ski resort of Crested Butte, and south to the Curecanti National Recreation Area. The volcanic ridges and long valleys offer extensive hiking and climbing. Over 200 miles of constructed trails are available for both foot and horse travel through this sometimes-rugged terrain. Elevations within the Wilderness range from 7,000 to over 13,000 feet. Because the area lacks fourteeners, centennial thirteeners and numerous alpine lakes you will get the benefit of hiking alone and away from the typical recreational visitor.

From late September into early October, nothing beats the West Elks for fall color. Photographers, hikers and climbers are rewarded with a dazzling display of golden fall foliage. The nearby Curecanti Recreation Area and Uncompahgre Wilderness also share the same climate, a dry climate that varies greatly from day to night and provides minimal precipitation. During spring or summer, freezing morning temperatures quickly make room for afternoon warmer temps; it’s not uncommon to feel a 20-degree swing from the shadows to the sun. This cool and dry climate is perfect for aspen groves, russet Gamble’s oak, maroon-colored serviceberry and mountain mahogany. In addition, the climate works well for wildlife including elk, mule deer, black bear, bobcat, mountain lion, and coyote.

In addition to the great fall foliage, the West Elks are outlined with charming small towns like Crested Butte, Crawford, Hotchkiss, Paonia and Somerset. All of these tiny towns offer an extensive network of dirt roads that escort you into the heart of the Wilderness. These roads have a reputation for being rough, muddy and rutted-out, especially after any recent precipitation. Also, be aware of roaming cattle. 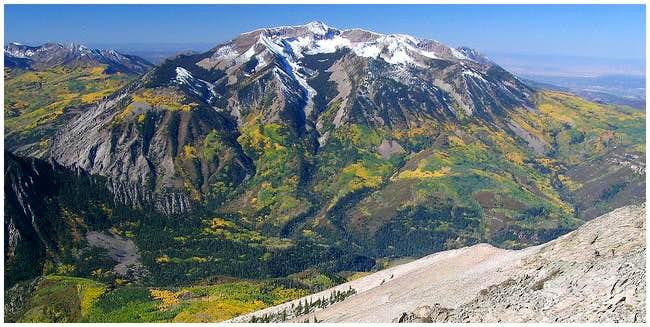 Mount Gunnison
Mount Gunnison (12,719-ft) resides just inside of the northern boundary of the West Elks Wilderness, which is encompassed by the beautiful Gunnison National Forest. It views unmissable from the tiny town of Paonia, and very distinguished from the nearby Beckwith’s and Mount Guero. Gunnison is an expansive mountain as well as a unique and very complex one. Like no other single mountain in Colorado, Mount Gunnison’s snake-like ridges support nine different valleys within 1.5 miles of its summit. As the incredible northwest ridge flows away from the summit, it eventually splits into six different ridges! Mount Gunnison also flaunts a 1000-ft near vertical north, northeast face.

Mount Gunnison is also Colorado’s 13th most prominent mountain, ranking ahead of 94 of the states highest 100 mountains, including 46 fourteeners. With over 3,500-ft of prominence, Mount Gunnison delivers a great 360-degree view of the surrounding terrain.

My overall experience climbing Mount Gunnison was a memorable one. However, the 12-mile drive up to Beaver Reservoir should be respected, especially if it rains. Like most of the area roads, this one gets really muddy and rutted-out. The potential for getting stuck in mud is real. There’s also a lot of cattle roaming the road and it’s not uncommon to find yourself in a standstill waiting for the moo-moo’s to decide whether to move or not move for your honking truck. Just give them a little bump with your vehicle and that should be enough.

Lastly, the South Ridge Route is only class 2 but the tree-laden approach presents a serious crux; locating the “secret” Hoodoo Creek Trail. Don’t be disappointed if you don’t locate this trail quickly, we certainly didn’t. Persistence is key in finding the unsigned Hoodoo Creek Trail. Yes, you do have to find the trail, or ready yourself for countless creek crossings and a pretty nasty bushwhack.

Along the secret Hoodoo Creek Trail 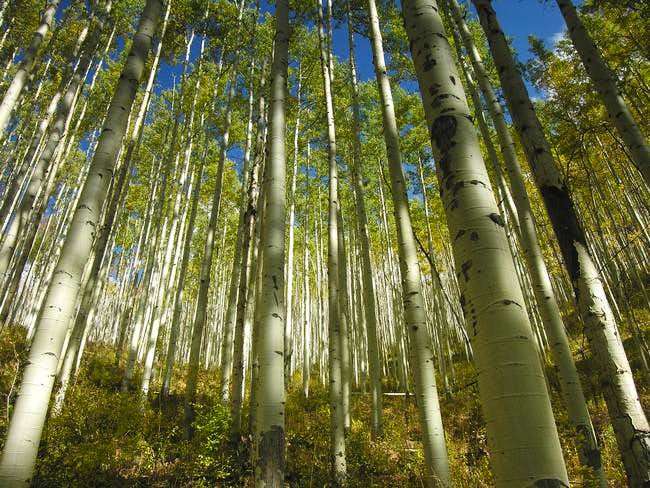 From Hwy 133, turn left and drive the main road a half mile to Paonia and turn left on 2nd Avenue. Go to the train tracks on 2nd Avenue in the town of Paonia and continue .4 mile to a fork in the road. Turn south (right) on Minnesota Creek Road, it is paved for the first mile or so and then it becomes an improved dirt road. Follow this road 5.6 miles to a signed T-junction. Left or straight will take you to Minnesota Reservoir. Turn right on the Beaver Reservoir Road. Follow this road another 6 miles to the Beaver Reservoir Dam and continue around the west side of the reservoir. There are several good camp sites here and the TH is here as well.