Nipple Peak is one of the premier peaks in the Elkhead Mountains. Despite its low elevation, it is an impressive peak and quite challenging in winter and spring.

Nipple Peak is named for Maggie Baggs, whom Baggs, Wyoming is also named after. Maggie Baggs was known as the meanest and toughest ranch hand in the west, male or female! Even the gunfighters feared her. The cowboys used to make fun of her behind her back. One unfortunate cowboy made the comment that the peak looks like Maggie’s nipple, unaware that Maggie overheard him. She publicly horsewhipped him before dragging him through town behind her horse. The peak became known as Nipple Peak, but there are actually some other Maggies Nipple’s in the area as well.

There are also few lakes, so the range isn’t visited by fishermen. Despite their low altitude, the Elkheads receive much snow, and snow lasts into July on the higher peaks. Most of the peaks in the Elkheads see very few ascents, but Hahns Peak, the eastern-most peak in the range is a popular climb for residents of Steamboat Springs. The Bears Ears see quite a few ascents by Elkhead standards, because of their prominent shape and visibility from the Yampa River Valley. Black Mountain is also climbed fairly often because it is the highest point in Moffat County, and the popularity is on the increase with more county highpointing interest. Most of the rest of the peaks see few ascents, and one ranger has told me some of the peaks only have a few names in the registers since 1980.

Sand Mountain must be a fairly popular (by Elkhead standards) climb as well, as there is a trail to the top, and as it is the first and only mountain in the range where I have ever met anyone. This was on Labor Day weekend, 2005, when we saw 3 other hikers. So, there are few hikers around, but hunting is another story. The Elkheads are very popular for hunting in the fall and contain large populations of deer, elk, bear, etc.

The Elkhead Mountains are made of old volcanic rocks 17-25 million years old. Nipple Peak itself is an old volcanic plug. One thing unusual is that the Elkhead Mountains run west to east as opposed to north and south as most of the ranges run in North America. It is impossible to describe the general forms of the peaks because they are all so different, but most of the peaks are isolated rises from a huge plateau that forms the bulk of the Elkheads. 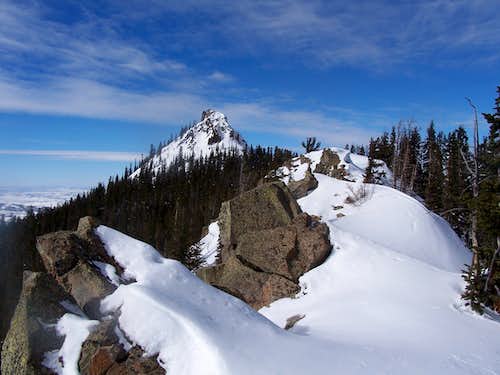 The topo maps available don’t show the roads or trails on Nipple Peak accurately. The closest one that bears resemblance to reality is the Forest Service Map-Routt National Forest, but it is of a small scale. The USGS maps don’t show many of the roads in the areas, but seem to show roads and trails that don’t exist; at least not any more.

From Steamboat Springs, drive to the north end of town and to where County Road 129 leaves Highway 40. A sign marks "Clark" and "Hahns Peak". This is the same road heading to the airport. Follow County Road 129 north for about 29 miles, past the small town of Hahns Peak, and to the north to Tribly Creek. This trailhead is halfway between the turnoff to Hahns Peak Lake and Columbine and is located on the west side of the road. In winter you will park here. In summer, this is Forest Road 488.

It appears that there are many possible routes to the mountain. Possible starting points for the climb include Columbine, Tribly Flats, and Hahns Peak Lake, to name a few.

We took the route from Tribly Flats, and used logging roads and cross-country travel to reach the southeast ridge of the peak. CLICK HERE FOR THE ROUTE PAGE.

The final summit nipple is a class 2-4 scramble in summer, depending on the route, but tougher in winter. Since I have only visited the mountain in winter, all references will be to our winter climb, until I complete other routes in other seasons.

There is also a class 2 (or 3) scree walk to the summit on the south face of the peak. 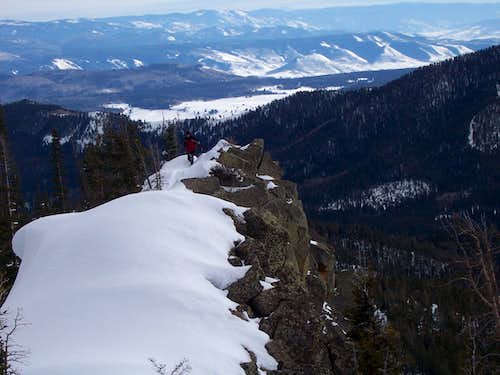 The normal summer climbing season is late-June through September. The peak can be climbed year round with the right skills and equipment. Outside the summer season, you must park at Tribly Flats, Hahns Peak Lake, or Columbine.

Nipple Peak is quite challenging in winter. It is a very long one day climb, so you should start at dawn, at the latest. Expect a 12 hour or more climb in winter. 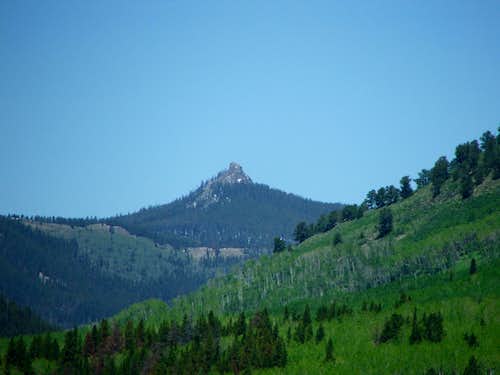 Nipple Peak as seen from Routt County road 129 near Steamboat Lake in mid-June.

Below is the National Weather Service Climate Summary of Steamboat Springs. The data is from 1908-2005. This is the closest long term weather station, but be aware that higher elevations will be much wetter and colder. Steamboat Springs is at 6695 feet elevation, so expect the temperatures on Nipple to be 10-20 degrees colder than in Steamboat (except for cold winter nights).