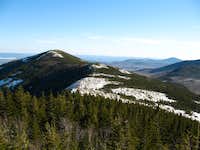 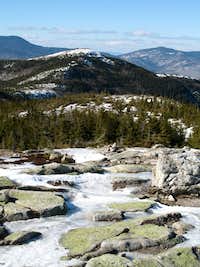 North Baldface
Here's an argument against peak bagging: while you're spending your weekends chasing all 48 of New Hampshire's 4000-footers, you might miss some small but spectacular gems like Cardigan, Chocorua, and the two peaks described here. Just take a look at the satellite view: unlike a lot of 4000-footers, a significant portion of Baldface is above treeline. As a consequence, Baldface's ridge loop offers nearly continuous views in most directions, including a breathtaking view of Mt Washington looming above the Carter Range.

Update: If you insist on following a list, you'll be glad to know that these two peaks are included in the list of 52 with a View. 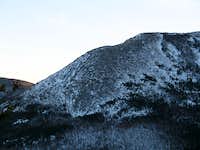 eastern spur
The barren eastern spur of South Baldface has a nice ledgy section which can get very interesting in slippery conditions. After the spur, you climb to the summit, where the view to Mt Washington is revealed with shocking suddenness.

North Baldface is somewhat less interesting even though a tiny bit higher - the higher parts of the Carter Range obstruct the view to Mt Washington, and the trails aren't as steep or dramatic. Still, the views are far better than you'd expect from a 3000-footer.

The names of these peaks don't include "mount" or "mountain", according to both the USGS and the AMC.

These two peaks are located on the eastern edge of the White Mountains, very near New Hampshire's border with Maine and about as far north as Mt Washington.

Directons below are for the Baldface Cirle trailhead.

From Conway NH, head east on 302/113 to Fryeburg ME, where 113 North takes a sharp left (not well-marked, but if you see the sign for 5/113 South pointing right, backtrack a couple of blocks). Take route 113 (paved but bumpy) north about twenty miles. The small parking lot - plowed in winter- is on the right shortly after a huge brown sign. The trail is a short distance further north on the opposite side of the road. There's a sign, though it's partly obscured by a telephone pole.

Getting to Conway from points south: If traffic is light, you can take rte 16 some 75 miles all the way from Portsmouth NH, which is on Interstate 95. If you prefer to maximize your highway miles, you could take Interstate 93 north, and turn east on your choice of rte 25, 112, or 302. 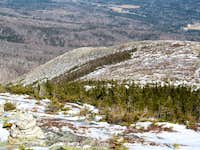 southern leg of Baldface Circle
The Baldface Circle Trail makes a loop from the east over both peaks. Its two halves diverge at Emerald Pool about a mile from the trailhead. The southern part passes Chandler Gorge and the South Baldface Shelter, and includes a section of steep ledges on South Baldface. The trail follows the ridge from South Baldface to North Baldface, condinues north a short distance to Eagle Crag, and then drops down (short steep section right near the top) and returns to Emerald Pool. There is a noteworthy stream crossing just above Emerald Pool, and a smaller stream shortly above that. The complete loop is 9.8 miles, with about 3600 ft of elevation gain. (Elevation gain is about the same for any route.)

The Meader Ridge Trail and Mt Meader Trail can provide a larger loop on the north. The Mt Meader Trail reaches rte 113 less than a mile north of the Baldface Circle Trail. A two-mile detour not counting the road.

Some very long approaches are possible from the West via Eagle Link, which climbs from the Wild River Trail (about midway between Perkins Notch Shelter and Spruce Brook Campsite) to Eagle Crag.

Almost none. The trailheads (except Slippery Brook's southern end) are outside the WMNF, so there is no parking fee.

The lower sections of the Baldface Circle Trail are on private land, so please stay on trail.

With one exception, these shelters, campgrounds, and cabins are managed by the White Mountain National Forest (USFS). For more info try calling the Saco Ranger District at 603-447-5448. Info on these remote spots is hard to find online, if you learn anything useful please share it in comments to this page. 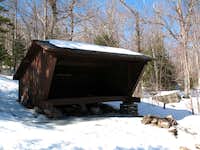 South Baldface Shelter - just below the steep section of South Baldface's eastern spur. Note: there is a stream here but it's reportedly not too reliable in summer. Be sure to bring enough water if the weather's been dry.

Blue Brook Shelter - On the Black Angel Trail, high on the northwest side of Ragged Jacket, a sub-peak of Mt Meader. An option for an approach from the north.  (Under consideration for dismantling by the WMNF - may not be standing by the time you read this.)

Perkins Notch Campsite - at the head of the Wild River, about halfway between Carter Notch and Eagle Crag. An option for a western approach.
(Formerly the site of a wooden shelter.)

Spruce Brook Campsite - (formerly the site of a wooden shelter) - in the middle of the Wild River valley, about halfway between Perkins Notch Campsite and Wild River Campground.

Basin Campground - at The Basin east of Mt Meader

Hastings Campsite - on Rte 113 near the junction with Wild River Rd.

Huts
Hiking from any of these to Baldface would probably be a full day, but here you go anyway:
Carter Notch Hut (AMC) - at the col between Wildcat and CarterDome. You could take Wild River Trail and Eagle Link to get to Baldface from here.

Doublhead Cabin - on a ski trail up Doublehead, off Dundee Rd. No trails to anywhere from here.

Backcountry Camping
Within the WMNF, allowed below treeline and 1/4 mile from roads, shelters, or other structures. Also, you must be 200 feet from the Wild River Trail.
full rules
Remember that the lower parts of trails such as Baldface Circle are on private land, not WMNF land.

Weather & When to climb

The peaks of Baldface are not very tall, so temperatures won't be much different from the readings above. However, be prepared for high winds as there is not much shelter once on the ridge. Avoid the eastern spur of South Baldface in bad weather - it is much more steep, exposed, and slippery than the rest of the mountain.

These peaks can be climbed year-round. Normally no special equipment is needed.
In winter and early spring:
- some navigational and route-finding skills may be needed above treeline.
- bring both snowshoes and crampons as the ledges can be dangerous when icy and the ridge trail will only rarely be broken out.