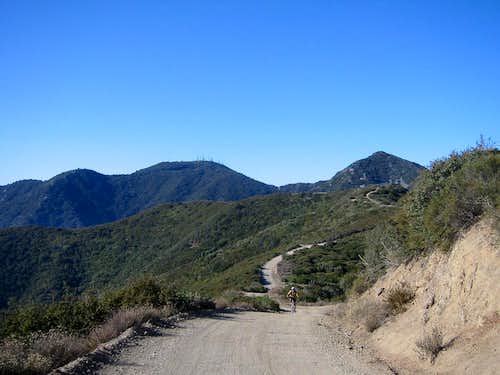 The twin peaks of Modjeska and Santiago tower high over the rest of the Santa Ana Mountains. (by greekclimber)

From nearly all of Orange County, get up high and look east and a prominent and distinctly shaped mountain will dominate the eastern horizon. Its shape can be distinguished from as far as the Santa Monica Mountains on a clear day. In which ever way you look at it, Saddleback Mountain, as it's known, is a very important landmark contributing to the name of a school district, a mega-church and a community college.

The unique saddle shape of the Saddleback is formed by two distinct peaks: Santiago Peak to the southeast and Modjeska Peak to the northwest. Santiago Peak is the higher and more visited of the two. Unfortunately, it's so overcrowded with communication equipment that there is no good place for a true 360-degree view. Therefore, Modjeska Peak, despite being a quite significant 190 feet lower, may actually be preferred for its more "natural" summit.

I recommend that you explore both summits and explore the differing views if you have the time. They are remarkably different with Santiago Peak giving a deeper view into San Diego County and Modjeska Peak offering a more complete view of eastern Los Angeles County and northern Orange County. From both summits, you can see Sandstone Peak, Mount Baldy, Mount San Gorgonio, San Jacinto Peak and Catalina Island.

Holy Jim Trail (see directions on SP page) climbs up the Holy Jim Canyon to the Main Divide Road just east of Santiago Peak. The trail intersects the road twice. It ends on the second intersection at a benchmark just east of Santiago Peak. Heading north (right) will take you into the saddle and to the summit road. Round trip is about 18 miles. Total elevation gain is about 4600'.

Maple Springs Trail, at the end of Silverado Canyon, climbs up 7.5 miles from the canyon trailhead to the Main Divide Road and then up the road to the summit making for a total elevation gain of about 4100'. Total round trip is about 24 miles.

The Harding Truck Trail is at the end of Modjeska Canyon which climbs up 9 miles to the Main Divide Road. The summit is to the south. Total round trip is about 27 miles. 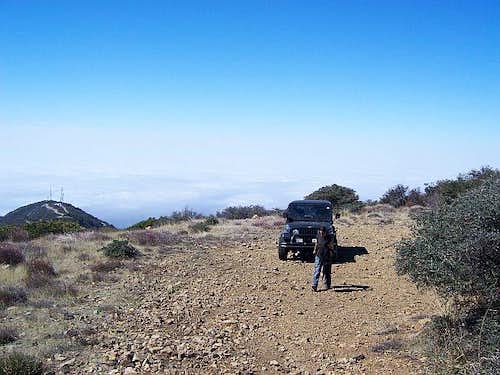 The summit of Modjeska can be driven up by those familiar with rocky dirt roads. (by theronmoon)

From the South - From Ortega Highway
The Ortega Highway is a 29.5 mile-long road that cuts through the Santa Ana Mountains via the San Juan Canyon connecting San Juan Capistrano and Orange County with Lake Elsinore and southwest Riverside County. Except when Main Divide Road opens to vehicles, these are not practical ways to climb Modjeska except for bikers and backpackers.

Main Divide Road is a long, partially paved road running the length of the backbone of the Santa Ana Mountains. It intersects the Ortega Highway about 6 miles west of Lake Elsinore at the pass. From there, head north on Main Divide Road to the gate where the road loses its pavement. If fire danger is low and the road isn't washed out, the gate should be open and you will be able to drive up. Otherwise, begin your trip here.

The Los Pinos Trail is the other way from the south beginning at the Lazy W. Ranch at the road's west entry into the National Forest. It meets up with the Main Divide Road after crossing over Los Pinos Peak (around 8 miles) where heading north takes you over Santiago Peak to the summit road.

There may be other routes that I do not know of. If you know about any other trails or roads coming in from Riverside County excluding from the Ortega Highway, please leave a message in the Additions/Corrections section.

A National Forest Adventure Pass is required to park on National Forest land in the Cleveland National Forest. These can be obtained at any ranger station in the forest. Day passes are $5 and annual passes cost $30 for the first and $5 for each additional.

Alternatively, the $80 Interagency Pass, issued by the federal government for all federal fees for a year is also valid for use here.

No wilderness permits or permits of any other kind are needed. 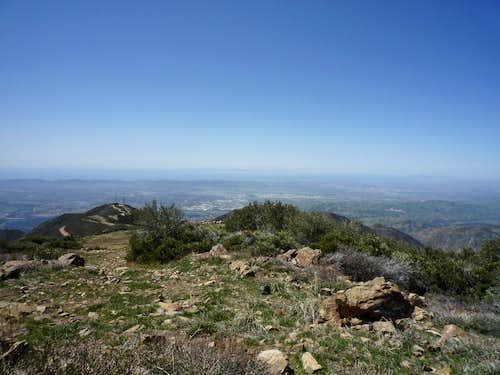 When the air is clear in the winter and early spring, the view often stretches far out to the Pacific and Catalina Island. (by SoCalHiker)

Summer along the lower reaches of the mountain can be very hot. The Santa Ana Mountains are known for their desert-like summer climate which may often exceed 100 degrees. The summit though, being at over 5000' in elevation, is generally comfortable during this time of year. Summer and spring also see the greatest chance of thunderstorms though the threat is far less than to the east in the desert.

Snow is fairly common above the 4000' line in winter. Except with cases of unusually heavy snowfall, it generally does not last very long. The Main Divide Road is often muddy with the melted snow and any additional rain during this season.

Please check the forecast on the National Weather Service site for Modjeska Peak before heading up.

The higher peaks of the Santa Ana Mountains including Modjeska are part of the Bedford Canyon Formation from the Triassic-Jurassic Period. This formation includes the oldest rocks in Orange County from about 225 million years ago. These rocks include argillite, quartzite, slate, shale and limestone. See the IVC page about the Geological History of Orange County for more information.

Rock collecting in the Cleveland National Forest is permitted so long as it is not for commercial use.

Modjeska Peak is named for Helena Modjeska, a well-known Polish actress who lived in nearby Anaheim after immigrating to the United States.