If asked what the most visited peak in Utah is, Hidden Peak would probably not be your first guess - but it's true. Thousands of people visit this summit every day from December to April; it is the home to the terminus of the Snowbird Tram. Although Hidden Peak does not have much prominance, it is the easiest of Utah's 10K+ peaks to summit - all that it requires is a large chunk of spare change in the summertime and a ski pass in the winter.

Lately, there has been a lot of controversy over the future of (what's left of) Hidden Peak. See the History section for more information and weblinks. 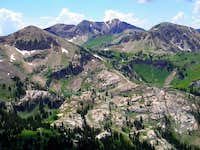 As far as climbing & hiking excitement go, Hidden Peak is down at the bottom of the list for those who understand what the Wasatch mountains hold in store. This is because there are two (three now?) dirt roads and a tram leading to the summit. However, it does offer great views of the Little Cottonwood Canyon, upper American Fork Canyon, the Cottonwood Ridge, the Alpine Ridge, the Salt Lake Valley below, and the Oquirrh mountains in the distance. What makes this peak unique in the Wasatch is that anyone can reach the summit (via the Tram) - including the elderly and the mobility challenged. This is both good and bad -- it is good because it offers a taste of the glory of the mountains to many who would never otherwise get to a summit, but it is bad because the Tram and all of it's structures are an eyesore - to put it mildly. At least the Tram terminates on Hidden Peak, where as the name suggests - it is [somewhat] hidden.

Sometime around the late-90s, Snowbird began hosting summer ORV (4-wheeler & motorcycle) tours in their ski area. The author is not sure if ORV-ing is allowed in Peruvian Gulch and Gad Valley (it is allowed Mineral Basin), but he suspects so. This is bad news for those who unknowingly come to the area for tranquility. Fortunately, Snowbird is the only place in Little Cottonwood canyon where such vehicles are allowed, and one needs to drive only a few minutes up-canyon or down-canyon to find another area that will offer peace and quiet.

Overall, the Hidden Peak area is a nice place for a family with young kids, or to take Grandma & Grandpa to (there is even a nearly level, paved trail, leading to a viewing platform at the base of the mountain. The Wasatch Mountains hold many more pristine areas, however, and you should be aware of that.

For an alternate approach through American Fork Canyon, see the route page.

No passes or permits required to access the area or hike to the top. Parking may be the only piece of red tape. There is usually plenty of parking, but there are parking restrictions - be sure to follow the rules or you might get ticketed.

In the past, Snowbird used to offer free tram rides from the summit down, but they no longer do this. However, one might be able to talk the operator into it, or just sneak on - if you don't look too conspicuous among the tourists.

Also, because Little Cottonwood Canyon is a watershed, no domesticated animals are allowed in the canyon.

There are two campgrounds in Little Cottonwood Canyon called Tanner's Flat (in mid-canyon) and Albion Basin (in Alta, at the end of the canyon). There are not many other spots to camp near the canyon bottom. You must hike up away from the highway to find other spots to camp. The area north of Hidden Peak is almost exclusively day-use.

On the American Fork Canyon side, unorganized camping sites are abundant. But be aware that the area is very popular to motorized off-road vehicles.

The following information is current as of May 2006.

In the last few decades, there has been a lot of action on Hidden Peak - particularly in the last decade. Snowbird is planning to build a 50,000 sq. ft. structure that will contain: a convention center / 2 restaurants / a bar / and a theater. A local conservation group in Salt Lake City, SAVE OUR CANYONS (SOC) sued the USFS in an attempt to prevent the structure, or at least decrease it's size and impact. Snowbird did decrease it's size from the original plans of 78,000 sq. ft., but unfortunately, SOC eventually lost their court battles, and it looks like it will be built. For a more comprehensive report on the subject and other topics, follow this link: Save Our Canyons. For an intersting map (for all of you cartographiles out there) of where the convention center will be visible from, click here. However, the latest information that the author could find is that this structure is on hold. If someone out there knows more about this, please add it to "Additions/Correction" and I will update this page.

Although SOC was not able to stop the mountain-top center, SOC has had some success. One thing they were able to do was stop Snowbird's planned expasion westward - into White Pine Canyon, a popular backcounty area. White Pine Canyon borders the Lone Peak Wilderness area (Utah's first, and arguably finest, wilderness area), and SOC effectively argued that the wilderness area needs a buffer zone, and Snowbird was forced to abandon its westward expansion plans.

In a seemingly reactionary response, Snowbird pursued plans to expand its operations into American Fork Canyon, in an area known as Mineral Basin. This, of course, was very controversial, and SOC sued again, but Snowbird prevailed. Now there are two high-speed quad lifts in Mineral Basin and many ski runs.

Also, to provide better access to Mineral Basin, Snowbird is drilling a tunnel from Peruvian Gulch to Mineral Basin. This will further scar the mountainsides, but at least Snowbird did not terminate another lift on a ridgeline. The tunnel will by 12 ft. wide by 10 ft. tall, and will house a one-way people mover (like in airports) to convey skiers southbound - from Peruvian Gulch to Mineral Basin. This kind of tunnel is unique in the United States, and carries some interest in that respect, but at what cost?

As Snowbird continues to evolve and grow, it is terrific that there are people out there (like SOC) to scrutinize and stand up to the man. As Edward Abbey said, "The idea of wilderness needs no defense, only more defenders."

Note the sign in the image below, taken from the top of the tram on Hidden Peak, which is not without irony. 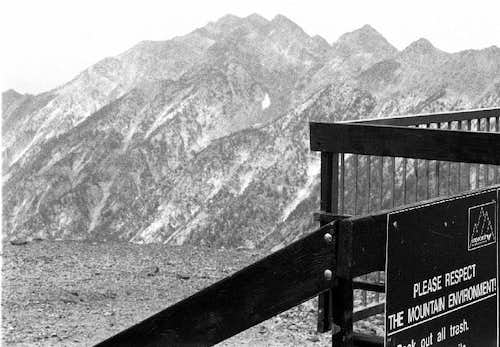 Save Our Canyons - Snowbird page

Trails Map from Snowbird.com, is an excellent large aerial photo map of the entire southern slopes of the eastern half of the Alpine Ridge - from the Pfiefferhorn to the upper reaches of Alta.

Here is a map that works with your page. It shows all of the trails on the north side of Hidden Peak. http://www.summitpost.org/view_object.php?object_id=116986

Thanks! I'll add it. You sure have climbed a lot - I'm green with envy.